This weekend will see the famous MONTANE® Lakeland 100 / 50 ultra distance races take place. With over 1,100 entrants and a strong, competitive field, this year’s race is certain to raise pulses – not just amongst the runners.

The epic ML100 race starts from the John Ruskin School in Coniston on Friday 25 July, while the shorter, speedier ML50 sets off from Dalemain on Saturday 26 July. The 50-mile event this year is a British Athletics Ultra Trail Championship event and will without doubt see some fast racing from the top ladies and top men. Will course records be broken?

Several Team Montane members will be participating and hopes are high for spots on the podium.  Stepping up to the endurance ML100 will be Debbie Martin-Consani and Steven Major.  Both have tackled the event before, however, as veterans of the course will readily admit, prior experience doesn’t necessarily make it any easier.

Debbie is an experienced ultra distance runner with various podium finishes under her belt, amongst which finishing 1st in the 145 mile Grand Union Canal Race in both the ladies and overall categories.  She has also been selected to run for Team GB for the International Association of Ultrarunners.  In 2013’s ML100, Debbie finished with a very respectable time of 26:02:00 in the ladies category, second only to Lizzie Wraith, who smashed the course record by just over 4 hrs 30 mins.

Steven took up running originally to fundraise for his son’s football team.  His first race was a 5 mile local fun run: “I found the run quite difficult, not having done enough training, but even so I got round in one piece and thoroughly enjoyed the camaraderie between other fun runners and organisers.  After experiencing this, I thought ‘I want to run it again’”.  Since that first 5 mile run, Steven has run longer, more difficult trail races.  This will be his third ML100.

The ML50, although it uses the second half of the ML100 course, is a completely different event.  Competitors are more tightly bunched together and competition is generally fiercer as the race distance is shorter.  Whereas ML100 participants take on average 30 hours to complete the course (the record stands at 19:50:37), the ML50 racers cross the finish line on average after 16 hours.  The current course record is 07:39:26.

Team Montane members Marcus Scotney, Tony Holland and Stuart Mills are raring to compete and there will be fireworks aplenty!  All three have competed in either the ML100 or ML50 before – Stuart has previously focused on the ML100, Tony has experience of competing in both distances and Marcus has participated in the ML50. 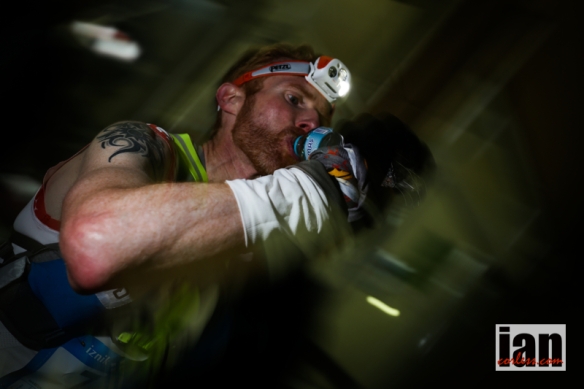 Marcus began running in 1994 and took on his first ultra marathon in 2008.  He has run trail, fell and road races and now concentrates on trail.  A high achiever, Marcus has numerous race wins to his name, most recently a stunning victory in the 130km Iznik Ultra in Turkey.  He returns to the ML50 after having to pull out of 2013’s race: “DNF’d at 28miles suffered with chest pain was like running up hill whilst running down down hill & breathing through a straw”.

Tony was propelled into the world of running in 2010 after being inspired by his son, who has Down’s Syndrome and regularly fundraises for the Northumberland Down’s Syndrome Support Group & Disability Activity through his running.  Initially a means of fundraising for Tony, it has transformed his life.  He is a regular on the trail running race circuit and last year set up his own specialist running store, http://www.ultra-runner.com/.  In 2012, Tony took on the ML100, but was forced to withdraw at checkpoint 9 of 14.  In 2013 he was back to tackle the ML50 and completed the course in a time of 12:18:49.  This year he will be on the start line once again for the ML50.

Finally, after winning the 2013 & 2010 ML100, legendary runner Stuart Mills will try his hand at the ML50.  He joined his local running club at the age of 14 and began training in earnest in 1978.  He ran his first marathon in Rotorua, New Zealand aged 17.  Stuart’s wealth of experience has led him to a set of core race tactics: “Run as fast as I can, while I can!”

But whether all or none of our fantastic Team Montane runners cross the finish line, one thing’s for sure – this year’s race will be electric.

For further information on the Montane Lakeland 100 / 50, click here