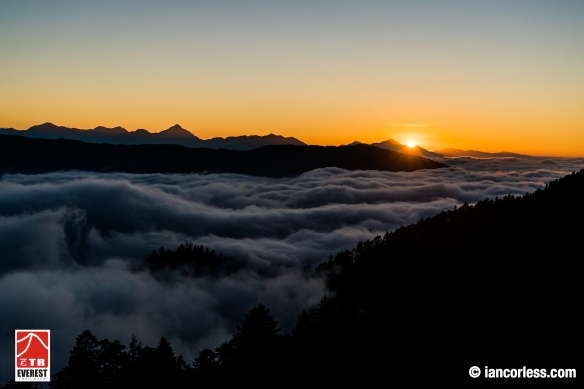 At 26km with 1916m of vertical gain and 1819m of vertical loss, day 2 of The Elements Everest Trail Race was a tough one.

In previous year’s Pikey Peak at 4100mm had appeared late in stage 2 with a loom and relentless climb to its summit. This year, with the course changes, the high summit would occupy the first 8km of the day – a tough way to start any day!

The change in direction brought the runners from the complete opposite direction and the usual magical vista visible at the summit and on the way to the summit was even more spectacular. Everest was mo longer hidden and clearly visible.

From the summit a technical descent that twists and turns to Jase Bhanjyang, here in previous editions, camp 2 would be located. Not today, the runners split to the left and then encountered new terrain that few people visit. It was technical with relentless boulder fields not allowing any opportunity to relax.

From Lamjura La and 8km decsnt, again technical until the final km would lead to Jumbesi and the final checkpoint. With just 4km left, the runners I am sure they were home and dry with just 4km to go… It was all uphill on steep narrow trails all the way to Pungmucheat at just over 3000m.

With two starts, 0700 and 0800 (faster runners starting later) the ascent to Pikey Peak was littered with runners of varying ability, but Suman Kulung Rai  and Miguel Heras made easy work of the climb arriving at CP1 in under 50-minutes. Suman taking time to point out the mountains to Miguel. They left at pace make the altitude and gradient look easy. Gerard Morales followed and then Hans from Norway.

For the women, once again Anna Comet set the pace chased by Manuela Vilaseca and then Nuria Dominguez.

At the summit it was all to fight for with 18km’s still to go, considerable technical trail, long hard descents and tough climbs.

Unfortunately disaster struck for Miguel with an injury forcing hime to ease off the pace opening the door for Gerard and Hans. Miguel would eventually finish 4th. Suman though was relentless making a tough stage look easy.

The women’s race took a twist from the previous day with Anna winning once again and Nuria finishing ahead of Manuela. 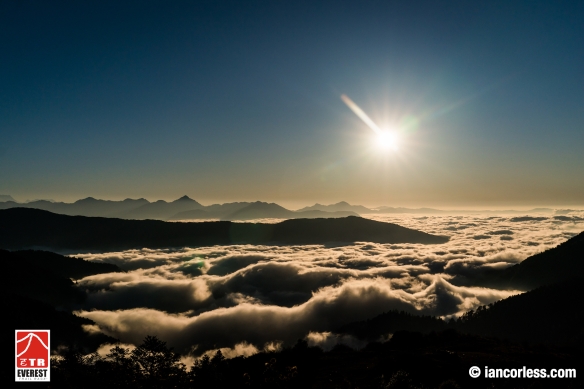 At 30km with 2232m of vertical gain and 3164m of vertical loss, the day will all be about management. In 5km the runners reach 3400m then drop and climb to Taksindu La at 3071m.m From here Chhulemu follows. Hewa, Jubing and then the final tough climb to Kharikola at 2100m