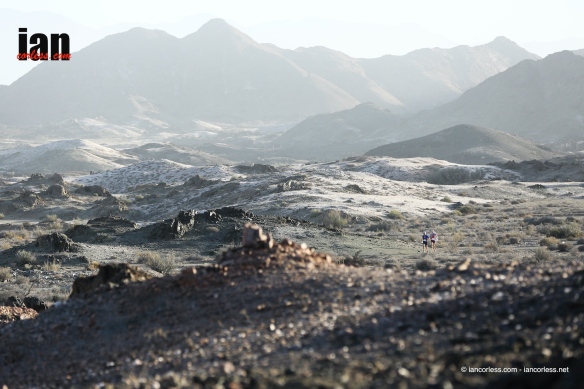 The silence was deafening. The darkness was black, oh so black and the stars glowed in abundance in the sky. It was the first morning of the 2016 Richtersveld Transfrontier Wildrun and anticipation was high.

There was a high level of anticipation, nerves and worry – particularly in regard to the route and the provided GPX files that had been uploaded to GPS units, or not, as was the case in some scenarios.

Buttons were being pressed, beeps could be heard and chins were being rubbed as rapid navigation 101 was undertaken just 30-minutes before the 0800 start.

Suddenly they were off and what followed was a stunning warm and sunny day in the Ai-Ais Richtersveld Transfrontier Park.

At the first control point, backed by an amphitheater of rock, it was soon apparent that despite a gps route, many runners were using navigation knowledge to cover ground as quickly as possible. The rule of the race confirms that between controls, the gpx route is a guide and that providing access to the control is from the correct direction, then a free route choice was allowed.

Tobias Mews and Jo Williams were the first to arrive at the first control but not via the direction the gps route indicated – was this a tactactical navigation move to gain time?

Race images are available at iancorless.photoshelter.com 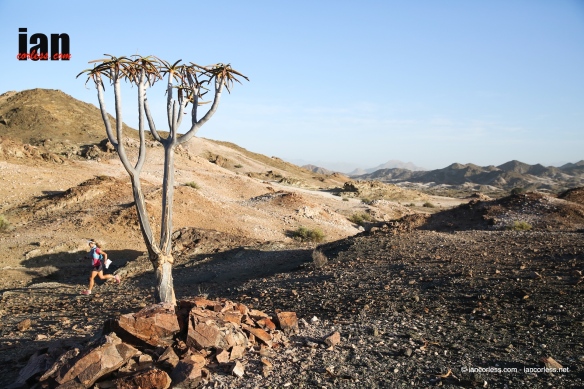 It looked like it as Linda Doke and Stephen Cunliffe arrived via the same route option. Slowly but surely runners arrived but a lack of Elisabet Barnes raised a few alarm bells. Elisabet arrived approximately 30-minutes later have followed the gps route, mark-by-mark. The 2015 Marathon des Sables champion was now on the back foot with a tough chase on her hands. 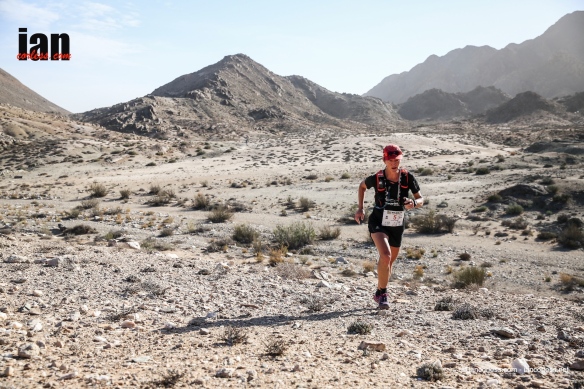 At control 2, Linda Doke and Stephen Cunliffe arrived and then a string of runners

and then Tobias Mews and Jo Williams – it was a little confusing, how had so many other runners gained so much time and what had been the leading duo?

Tobias Mews explained post race, “We made a navigational error and had to backtrack obviously loosing time and allowing Linda and Stephen to take the lead, however, we were surprised to then find other runners infront of us when we chased – we later found out that these runners had missed control one!”

The savvy navigational shortcut early in the race had unfortunately caused a problem for 5 competitors and due to missing the control, a 1-hour time penalty was applied.

What followed was a strong effort by Tobias and Jo, they reeled in the other runners, pursued Linda and Stephen and then pushed on. It was a brave move so early in a five stage race however it payed off. 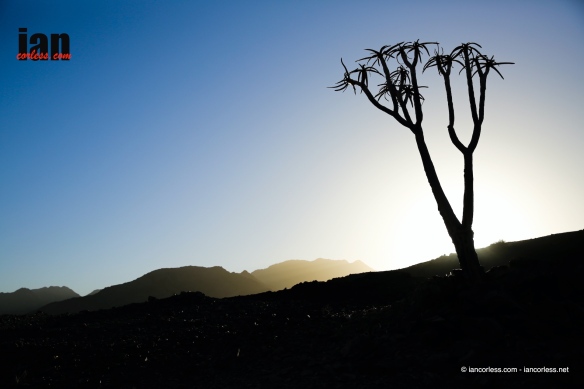 Jo Williams and Dawid Kaswarie finally made a break from Tobias and Stephen and they crossed the line joint first in 4:27:43, only for Dawid Kaswarie to loose all his hard work with a time penalty. Stephen Cunliffe and Tobias Mews ran together to finish joint 2nd in 4:46:49 and Linda Doke finished 3rd in 5:00:42. 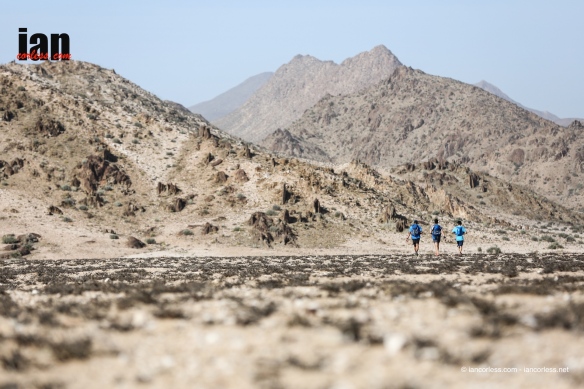 Way back in the race, ladies pre-race favourite was having a bad day – she had taken a tumble and was running with open wounds to her left knee and unfortunately another minor navigation error resulted in some additional lost time. Something was right though, Elisabet fell a further four times and once back in camp she relayed her story, “I saw Tobias and others taken an alternative route and I decided to follow the gps route as I was under the impression that was the correct thing to do. I lost time and sometimes you just have to accept that these things happen. However, I was feeling light-headed, lacking focus and after falling once, I fell a further three times. I feel a little banged up – it was a tough day!”

Elisabet was not the only runner to make errors with navigation, in nearly all cases it was the error of the runner to solely rely on the gps as a form of navigation and not use the provided map as a reference and counter reference. For some it was a tough lesson.

Day 1 at any multi-stage race can be a tough one and here in the Richtersveld, the 2016 Richtersveld Transfrontier Wildrun has provided a greater test than some expected.

Despite difficulties, the unanimous decision about the route and the scenery has been glowing – “This is like running in heaven,” said