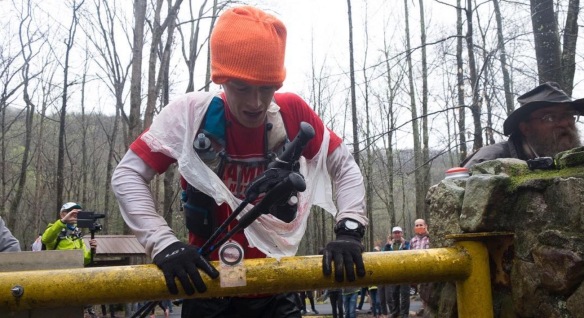 John Kelly was the 15th and only finisher of the 2017 Barkley. An incredible achievement and something that didn’t come easy (his 3rd attempt) for the Washington DC runner. His time of 59:30 shows just how close it was. However, many would say (including Laz the race director) that 30-minutes leeway is far too much in what is universally considered the ‘hardest’ race in the world.

Kelly had ran the first 4-laps with Canada’s Gary Robbins who was faced with a repeat of 2016 when he ran a similar story with Jared Campbell (who went on to win the race) for the 2nd time.

Kelly and Robins had traded blows, helped each other along and then at the end of the 4th lap they went there respective ways – one clockwise and the other counter-clockwise. A rule introduced by Laz to ensure less finishers and a race to the line. Both didn’t finish in 2016!

It was on this lap that the weather changed. Rain, mist, fog and of course sleep deprivation bullied the runners as they searched for the 13 books from which they must tear out a page.

Kelly triumphed arriving at the infamous yellow gate first having taken ‘anything’ he could find from the course to keep warm – a orange hat, a plastic bag and so on. As his hands touched the gate, he asked, “Where is Gary?”

It was a question many asked and as the 60-hour cut-off approached Robbins could be seen sprinting up the road, poles in hand, desperation on his face…

Would he make it?

Did he make it?

No – he was 6-seconds over the mythical 60-hour cut-off time. There was no way Laz would be lenient… the ultra world collapsed and universal sympathy was sent to Robbins on what was the most heartbreaking 6-seconds in running. 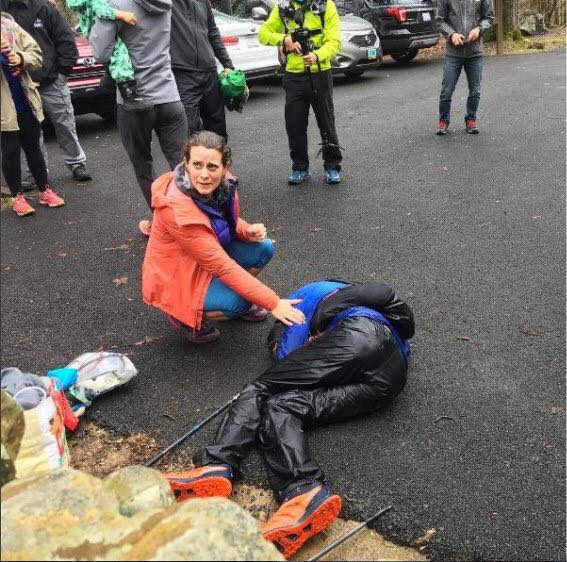 The reality is, it wasn’t as close as many first thought. Robbins had made a navigational mistake in the mist and fog. Although he made the yellow gate with all the relevant pages of the book, he did not take the correct course and therefore Laz would not have permitted the finish, even if Robbins had been within the 60-hour cut-off. Robbins tagged the gate from the wrong direction and in the videos posted on Canadian Running  you can see the desperation of a broken man.

He and the 2017 Barkley, rightly or wrongly, will be remembered as the most stunning 6-seconds in ultra running and it is comparable to those 8-seconds that separated Greg Lemond from Laurent Fignon at the 1989 Tour de France.

Both John Kelly and Gary Robbins are legends of the sport for undertaking the 5-loop beast at Frozen Head State Park in Tennessee as are all those who toe the line.

But we should all remember John Kelly for achieving what so few have done… Robbins brings us tears but as he says below, “I did not finish The Barkley Marathons, and that is no one’s fault but my own.”

Over the years, the Barkley has grown and grown in stature – funny for a race with $1.60 entry fee.

Everyone will now look to 2018. Robbins for sure will go away, lick his wounds and will be back… Kelly summed it up though, ‘Oh no, next years course is going to be even harder!’

40-runners will receive the letter notifying them that they have been unlucky to gain entry to the 2018 Barkley – would you like to be one of them?

Perspective – a statement from RD Laz:

I wish I had never said 6 seconds… Gary had just come in after having run off course and missing the last 2 miles of the Barkley, that is of course, not a finish. I do, however, always record when runners come in, whether they are finishing a loop, or not. So I had looked at the watch, even tho there was no possibility that he would be counted as a finisher. When someone asked if he had gotten in before the limit; I foolishly answered. I never expected the story to somehow become that he had missed the time limit by 6 seconds. He failed to complete the course by 2 miles. The time, in that situation, is meaningless. I hate it, because this tale perpetuates the myth that the Barkley does not have a course. The Barkley is a footrace. It is not an orienteering contest, nor a scavenger hunt. The books are nothing more than unmanned checkpoints. The Boston marathon has checkpoints and you have to show up at all of them or you can be disqualified… that does not mean you are allowed to follow any route you choose between checkpoints. Now, the class with which Gary handled this terrible disappoinment at the end of a truly magnificent performance… that was exceptional and is, in and of itself, a remarkable achievement. But he did not miss the time limit by 6 seconds, he failed to complete the Barkley by 2 miles.

Of course, Gary Robbins, ever the gentleman has soon penned just a few words to congratulate John Kelly and clarify the final moments of his 2017 Barkley. Read the full article and post HERE

“…I thrashed my way to the road and put my head down and gutted out the hardest three minutes of my life to collapse at the gate, overtime, and from the wrong direction. I did not finish The Barkley Marathons, and that is no one’s fault but my own. That one fatal error with just over two miles to go haunts me.”