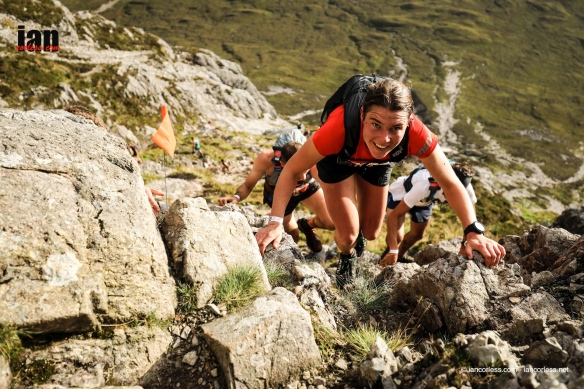 Jasmin Paris has long been regarded as the Queen of British mountain running! Her record on the Bob Graham Round and other rounds, her victories in skyrunning and her down to earth, no nonsense approach have endeared her to all fans of the sport.

Yesterday, she won The Spine, a 268-mile run billed as the UK’s toughest race race, in 83 hours, 12 minutes and 23 seconds. It was a record breaking performance that not only provided victory in the female race, but an outright victory. Even more stunning was her time… It obliterated the existing female record of 109 hours 54 minutes and more notably, the men’s record of 95 hours 17 minutes set by Eoin Keith.

The gap between male and female competitors in ultra running has always been closer – the longer the race, the better women perform. Ann Trason proved this many years ago and more recently, Rory Bosio placed in the top-10 at UTMB. However, Jasmin’s victory here at The Spine is  turning heads and rightly so.

To provide perspective, she has just appeared on the UK’s BBC Breakfast Show!

Starting on Sunday January 13th at 8am from Edale, Jasmin soon set her stall out running with past winners Eoin Keith and Eugeni Rosello. The trio pulled away, opened a gap and those in the know, me included, wondered could Jasmin pull something special off.

At Hawks, Eugeni and Jasmin forged away from Eoin. It’s not unusual for the lead to change in such a long race as sleep requirements vary and therefore one can expect many variables. At Alston, Eugeni slept as fatigue and sleep deprivation took its toll. Jasmin saw this as an opportunity and pushed on.

At Greenhead, Jasmin had a lead of close to 2 hours. But one sleep and a charging Eugeni could change all that… No! Jasmin seemed unstoppable and took little rest. It was soon becoming clear that Jasmin was not only in a race to win outright but set an overall course record.

Strong winds, cold and rain were relentless but conditions in comparison to past editions were good – there was no snow to slow the pace.

A recent mother, news came out that in addition to obliterating the race at a ridiculous speed, she was actually expressing milk when she took a break! And talking of breaks, over the duration of the 268 mile journey, this amazing inov-8 athlete slept less than 8 hours.

At the finish, Jasmin’s story had become world news. Social media was illuminated with her story and mainstream media was suddenly interested in our niche sport of ultra running.

This victory makes us start to ask a question about records and in future, should races just have one classification and one course record? Jasmin and others before her, have proven that women can compete and more importantly, beat the best-of-the-best.

It’s a stunning era for the sport and Jasmin is a true ambassador and role model to take the ultra running torch into a new era.

Eugeni Rosello looked set for 2nd place but had to withdraw just 6km from the finish. The mountain safety team escorted him off the hill – such a sad end for a valiant battle. This opened the door for Eoin Keith who was 1st male and 2nd overall.