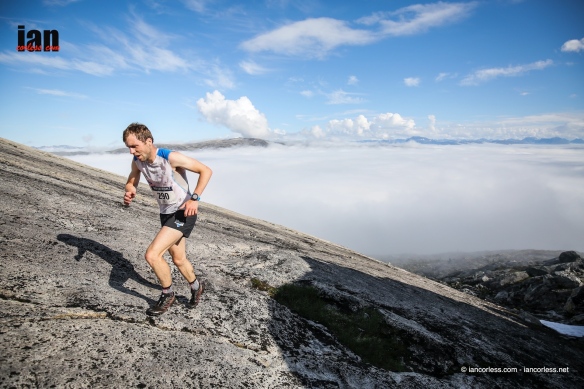 Starting from the sea and climbing directly to the 1044m of the summit of Blamann, the highest summit on Kvaloya island, the Blåmann Vertical Kilometer® is everything a Skyrunning race should be and the route personifies the sea-to-summit concept.

Unlike other VK’s, this route is more like a mini mountain race as the terrain twists and turns with a variety of mixed terrain. The early stage of soft boggy ground soon give way to huge slabs of rocks that at times require low grade climbing to cover. The use of poles offer no advantage as the race most definitely requires scrambling and ‘hands-on’ climbing.

Just 20 minutes from Tromso, the Blåmann Vertical Kilometer® is a race to embrace.

As expected, the newly crowned Skyrunning World Champion, Stian Angermund dictated the pace and the race on the steep slopes from the sea. In the early stages the course was shrouded by mist and cloud but as Stian zoomed up the climb, the mist lifted and above was a glorious day of blue skies and fluffy clouds. By the midway point, Stian had a clear lead over Andorran, Ferran Tpeixido and while other runners power walked with hand-on-knees, Stian ran looking relaxed but breathing hard.

At the midway point, Emelie lead the way with Yngvild Kaspersen hot on her heals. Trailing by approximately 30 seconds, Laura Orgue and Hilde Alders pursued.

Laura was not having a good day though, the VK specialist was obviously tired from racing at the Skyrunning World Championships and last weekends victory at the SkyRace Comapedrosa.

Hilde though was on fire. She caught Yngvild and Emelie and in the closing stages it was a neck and neck race with Yngvild leading the way followed by Hilde and Emelie in third. It looked as though this would be the finishing order and then Emelie released an incredible sprint… taking a different line, she zoomed past the other two just as Hilde responded. It was like watching a sprint in the Tour de France.

Attention now turns to tomorrow and the Tromsø SkyRace® which will start at 0800.