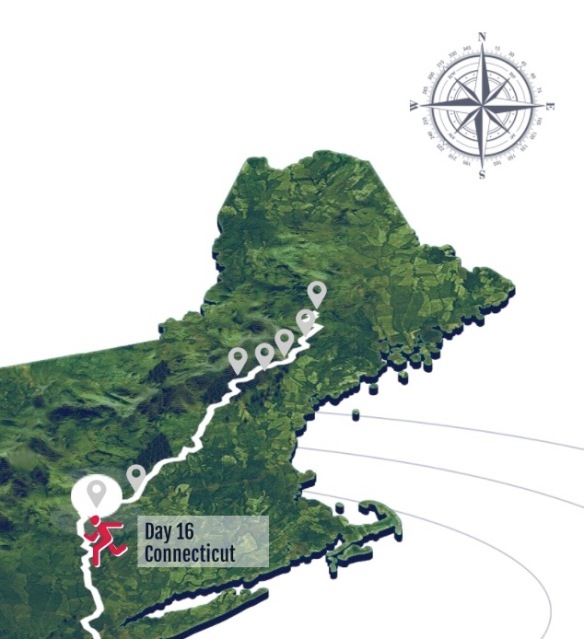 Last week we provided an update of Speedgoat Karl’s first 7-days on the ‘AT’ as he tries to set an ‘FKT.’ You can read that HERE

Karl is now 16-days into his journey and in Connecticut. Below we provide an update of days 8 to 14.

Today on all levels was challenging. After a long and challenging day yesterday, Karl continued his hike but slowed his pace down. A highlight of today was that Karl reached the summit of Mt Washington as conditions were harsh. Dense fog, cold air and gusty wind made the hike anything but easy. Karl continued after a late summit to Crawford Notch where he had a very late arrival. Though he is pushing himself, it’s important to note that getting in late also means less rest, which is critical in any situation and especially when you are trying to set a record.

Karl left on time today, however, when reaching the Knife’s Edge, our crew could tell from his demeanour that he is becoming even more exhausted with every step. Thankfully Karl made a trail companion through the Knife’s Edge that accompanied him for a while. It’s important to remember that as much as this is a physical feat, it’s mental too! Karl said that this hiker was important because at some points he helped keep the pace steady. Karl eventually lost the hiker on the downhill but nonetheless, every person Karl runs into on this journey is important to his success. While hikers’ journeys and motivations are diverse as the trail itself, the challenges of the trail reveal the common bonds between them. Karl decided to stop one stop early at Flume Gorge to catch up on rest and recharge his body for another long day on the Green Tunnel.

Karl finished the trek through the White Mountains at the end of Day 10. Not surprisingly, the White Mountains took a toll on both Karl’s feet and mentality. Karl is starting to form blisters around the bottom of his feet, as expected Karl got to his final destination before sunset which provided him plenty of opportunity to eat a good meal and relax before getting sleep. The crew brought Karl one of his favourite foods on the train, ice cream! It lifted his spirits. Karl’s attitude is amazing. The night ended well with jokes and laughter.

Karl picked up the pace as he headed towards the city of Hanover. Karl arrived in Hanover before expected and instead of sitting to eat and replenish, he insisted on walking while eating to keep the pace. He is an absolute machine! Karl experienced a dramatic shift in landscape as he ran through the city of Hanover – buildings and cars surrounded him as the AT guided him onwards and out of the city. While the change in scenery was welcomed, the surroundings were blurred by very severe storms in the area. A system rolled in during the morning hours and another one later in the night. Torrential rain and lightening caused Karl to arrive later than usual at 9:45pm. Though he won’t be getting normal hours of sleep to lead him into the day 12, he will have a running companion which hopefully will allow him mentally and physically to keep record speed pace.

Hello Vermont! Karl had a friend come and run part of the trail with him today which was instrumental in keeping good and efficient pace. Day 12 was a quick day, relatively speaking. However, there was a swarm of bees on part of the trail. Eric, (Karl’s are chief) went ahead as Karl is no fan of bees – Eric got stung! Thankfully for Karl, Eric must have given the bees all they needed and it was a clear passage. As the terrains flattens out from the White Mountains, Karl will hopefully pick up pace a little allowing him to gain more time.

Karl continued to trek south and is crushing the pace once again with an amazing attitude. The terrain is still mountainous but nothing like the harsh terrain of the White Mountains, the Green Mountain National Forest is kinder. Karl shaved off his beard today, it prevent flies, fleas ticks and other bugs getting a free ride and it’s a little cooler! The temperatures on the trail vary a great deal but is seasonally hot. Karl finished the day early catching the crew off guard. Even Karl Sr was taken by surprise, he had intended to join Karl on the final stretch in. Cheryl (Karl’s wife) prepared dinner and the route was planned for tomorrow. Bed by 9pm and hopefully the energy batteries will be restored for tomorrow.

Karl’s morale is high as he continues south. Eric (Karl’s crew) says this is down to a new iPod with new music. It keeps Karl occupied and at pace while running. Peanut butter and jelly sandwiches are another key element! Some rain today and bad weather today but Karl pushed on and is till, at times, arriving earlier than anticipated at certain points. The highest point in Massachusetts, Mt Greylock was the finish for Karl’s run today. A big meal and a nice bed waited. Though the terrain is less mountainous, roots still remain throughout the trail. In moments of fatigue, this can be extremely tough. The view from Mt Greylock was that of another planet, fog was so thick they could only see 2-5 feet. Green trees that surround the trail gave it a very eerie feeling.

Current stats show Karl has covered 757.4 miles with 1432.6 remaining. Please keep in mind that these figures are current at the time of writing.

Many thanks to Red Bull for the information and support. Content ©redbull