Uncompromising mountain running, ridges, scrambles, steep ascents, boggy ground and a bucket full of technical running made the Salomon Ring of Steall Skyrace™ the UK’s Zegama! Following in the tradition of Skyrunning iconic race, Zegama-Aizkorri, the inaugural Salomon Ring of Steall has been touted by all who run it as one of the toughest 25km’s they have ever run! A sentiment echoed by race winner and Skyrunning World Champion for the VK and SKY distance, Stian Angermund: “That was one incredibly tough and beautiful race. Wow, so technical and relentless. The ridges were long and challenging and the climbing kept coming. It really is an incredible race and one that I loved. I’d love to do more races like this!”

“A variation of the classic ‘Ring of Steall’ ridge-walking route this 25km / 2,500m mountain race has spectacular views of Ben Nevis from the Mamores and includes short sections of easy scrambling.”

Stian followed up his 2nd place in the previous day’s VK with a stunning win in an incredible 3:25:28. Race predictions stated that a 4-hour race was possible, but more like 4 to 4:15. A true reflection on the talent of the Salomon runner. 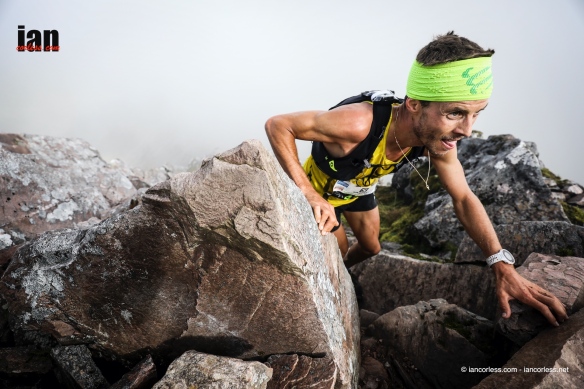 Adrien Perret placed 4th in the Mamores VK and today moved one step up to take the final podium place in 4:00:51.

In the ladies’ race, Georgia Tindley did the ‘double’ winning the Mamores VK and then backing up with a stunning Ring of Steall victory in 4:39:20.

This Skyrunning race route incorporated two lofty ridges within the Mamores, including the Devil’s Ridge, which provides a thrilling and airy traverse with Glen Nevis visible ahead and as a yawning drop far below, and Ben Nevis beyond and towering above.

The Salomon Ring of Steall Skyrace™ is set to become a classic Skyrunning event.

More images to follow and images available for purchase HERE

Glen Coe Skyline is featured in my new book, RUNNING BEYOND (information here)