The Salomon Mamores VK™ kicked off the Skyline Scotland weekend of racing with the UK’s first ever VK (Vertical Kilometre) race and what an incredible success… The pure ethos of sea to summit was personified with the Mamores VK that provided all runners with a challenging 1000m vertical climb over a distance of 5km in a course that was split into thirds. Skyrunning at its best!

The first third was runnable trail that may well have lulled everyone into a false sense of security. What followed was a wall of vertical fell with no path, just a line of orange flags leading to the sky.

As the fell submitted out, an arrow pointed left and the final section was a stunning rocky ridge that lead to the summit at 1000m+.

The Scottish weather played its part too, throwing everything at the runners in a 4-hour time window; Sun, cloud, clag, rain and strong winds. It was the luck of the draw what you received, however, for 4-runnners, the weather could have thrown anything at them and they would have still flew up the course. Experienced Skyrunners, Stian Angermund (VK world champion), Alexis Sevennec and Francois Gonon took the top 3 spots with Sevennec pipping Angermund by just 7-seconds, 42:17 to 42:25. Francois Gonon placed 3rd 44:48 and Adrien Perret was 4th in 44:57. 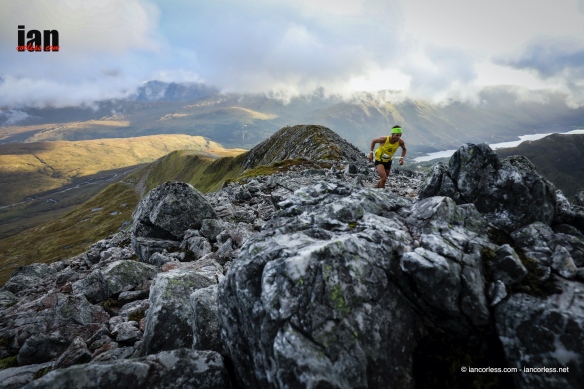 Following the well established International Skyrunning Federation ‘VK’ format, participants followed a marked course gaining 1000m of height in less than 5km. Participants were set off at timed intervals with the winner having the fastest overall time to the summit. The Salomon Mamores VK was the UK’s first VK and feedback has been incredible. This format is just what the UK needs to spice up racing for all abilities!

Whilst physically arduous, the Salomon Mamores VK™ route does not include technical terrain that requires any scrambling or rock climbing experience. As such, the race was suitable for any runner who is up for the challenge.

Glen Coe Skyline is featured in my new book, RUNNING BEYOND (information here)