Chris Baynham-Hughes writes about his experience of participating in the 2016 Salomon Glen Coe Skyline, the final race in Skyrunner® World Series for the ‘Extreme’ category.

Judging by the way the internet has exploded over the past week with a constant stream of comment, videos and pictures on social and traditional media; I think it is fair to say that the Scotland Skyline events were a success. What a weekend of running! Kicking off with the first UK vertical kilometre (VK) on the Friday it was a fascinating spectacle – not just the breath-taking scenery, time trial format, facial expressions that silently screamed for the end to be in sight or the cruel, deceptively deep, bog early on in the course, but in the stripped down nature of the race; an ultimate mountain test.

If the VK was the amuse bouche, then the Ring of Steall was the starter. 400 competitors toed the line for a spectacular course and the best of the weekend’s weather. Many had doubled up from the VK to take part in the Ring of Steall and didn’t regret it as the course simply kept on giving.

As part of the event team I’d spent seven hours on the Friday up Munros playing with the radio repeater (test, move, test, repeat) until ultimately we had to give up and bring it down. The Saturday had consisted of seven and a half hours on Sunday’s course marking the route with Pin flags and signs ready for the main course… well, the main course and the desert all in one really.

The Glencoe Skyline had grabbed my attention from its conception. The combination of scrambling, exposed ridge lines and epic territory had me intrigued. Missing the first running of the event due to other commitments meant I could only read quotes from our sports most respected ambassadors such as Emelie Forsberg and blog postings from those that took part; they did nothing to dissuade me from wanting to run this race. 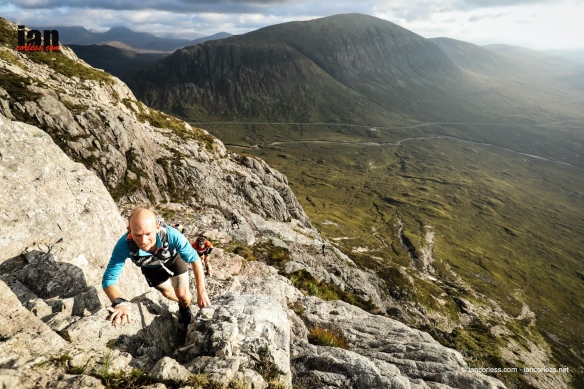 Whilst my interest was piqued, it wasn’t without a tinge of doubt. I wasn’t concerned about the organisation or running of the event – I knew that with Shane at the helm as RD the event would be of the highest possible standard. My doubts came from not knowing the key elements of the route and thus a fear that it may not flow, that it may in some way be a little contrived; putting in gnarly sections because they were gnarly rather than because they fit in the flow of the journey. 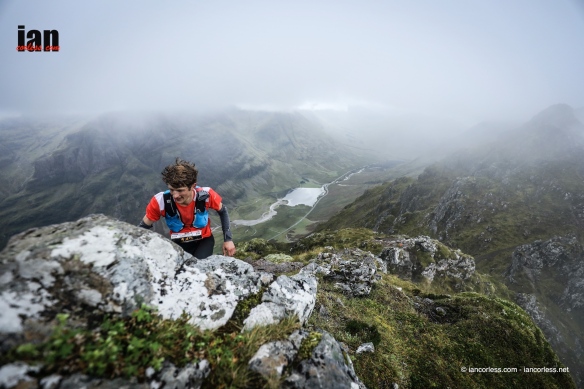 Having now run it I can state without a shadow of a doubt that this fear was totally unfounded. Not only that, I can do nothing but agree with the long line of people stating that it is one of the best if not the best race they’ve had the pleasure to run. It is truly stunning, a total cracker jack of a course that just keeps on testing and rewarding relentlessly for as long as you’re out there for. Everything fits; it feels like a natural journey and, frankly, does what it says on the tin, it takes in the skyline of Glencoe. 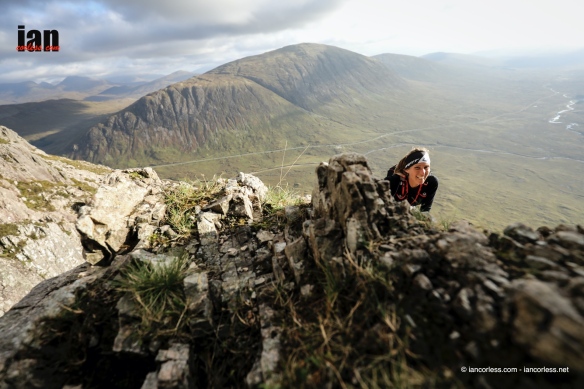 Having raced too much over the year and not long since returned from completing UTMB I was not expecting much performance wise. Sometimes we need to turn the racer off and the adventurer on and I had entered for the adventure. Getting out in the mountains for the two days before hand had been part of that overall adventure, so by the time I started it felt like the victory lap, the one to savour.

That time on the hill had allowed me to see parts of the course at its best. The main thing that struck me was that the mountains in Scotland are familiar but somehow different; like an aging celebrity that has “had some work done”… but this is not just a misguided effort to freeze/ preserve what was there, this is “Wow, have you seen what they’ve done to their…” type work. I’m lucky in that I primarily play in Snowdonia; an area of true beauty. Hard slogs are generally rewarded by long ridgelines and the mountains generally find their limits within your vision, whereas the mountains of Scotland are not conquered quite so easily.

Ok, so there are nice ridgelines enabling one to bag a number of tops, but there are also many tops that require a decent amount of descent and ascent for you to tick it off.  They stand alone as a mountain within a mountain and give away more to their half million year old volcanic heritage. The second thing I noticed was the sheer scale – not only are the a bit taller in general, but they stretch as far as the eye can see and beyond. The scale of the lochs and the frequently angry skies provide additional beauty and drama to frame this picture; inspiration on a massive scale.

The race starts with a fair trot out on the West Highland Way from Kinlochleven to one of the key features of this course; curved ridge. I’m not a climber so the grade III scrambles had been weighing a little in the back of my mind. One of the key reasons for the long trail run out was to spread the competitors as this section becomes a natural bottleneck and can cause frustration. My experience was very positive though. Yes it would have been great to have monkeyed up the rock faces at my own speed, but in the sections I had to wait I found there were no issues between the competitors waiting their turn and, frankly, the views were so stunning that I was quite happy to drink those in for a change. 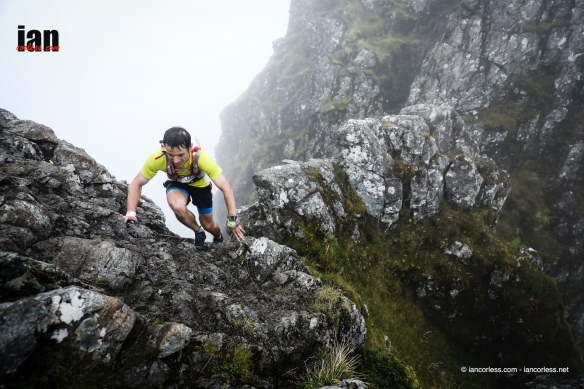 The support on the course was excellent. There were plenty of people out on curved ridge cheering, ringing bells, taking photos, giving hugs (to the people they knew I assume!) Don’t get me wrong, this was no Transvulcania with the whole local community out cheers, but it still had the feel of a world championship race. I’ve little doubt that this will build in successive years although I suspect it may be weather dependent.

Hitting the top the running was a delight. Technical, but very runnable undulating paths and single track descents were a joy to run. I don’t expect every year will include a helicopter hovering overhead filming, but it certainly added to the feeling like this race was special, like Skyrunning had really come to town. 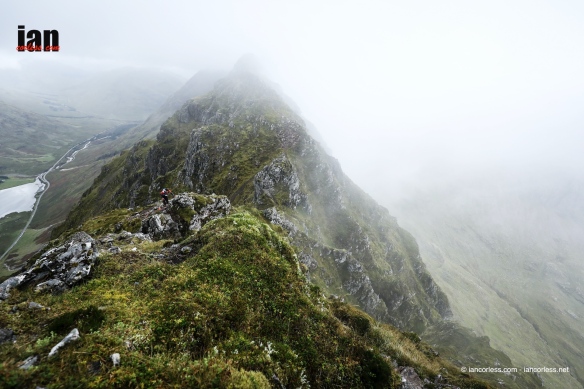 Joyous as this was there was always going to be some payback and the bump between us and the next section was steep and unforgiving on both sides of the top. The terrain became boggier underfoot on the climb and the descent was just the right gradient to encourage each competitor to trash their quads. The pockets of support continued before we hit a fast runnable section out to the second of the three main areas with Bidean Nam Bian as the main prize.

Having marked this section of the course I couldn’t wait to get to the ridge line and the incredible views. Sadly on the Sunday they were shorter lived as the mizzle came in determined not to reveal the surrounding beauty. This served me well over the tops allowing me not to be distracted and to knuckle down, but it also gave me another reason to be grateful for having been out on the course the day before.

Again, this part of the course didn’t disappoint. Even the out and back that seemed so unnecessary whilst marking the course served its purpose perfectly. The section is one of those descents and ascents to ensure you earn the bagging of the next peak, but the primary purpose is to allow competitors to see how far/ behind they are of their rivals. I can only imagine that at the front of the race this is vital, but the opportunity to see other friends and rivals was certainly welcomed by me.

The subsequent descent along the ridge is spectacular and quick, but step off the ridgeline and you know you’re in different territory. This section caught a lot of people out as they slipped and over balanced their way down. The rock was now wet and for my money that made this the most dangerous part of the course once the stone steps came into play with a friction akin to ice. There was a clear exception to this in the form of Naila Jornet who dropped like a stone! Her hip movement and grace gave away her skiing background as she flew past scores of people on this 800+ metre straight descent. 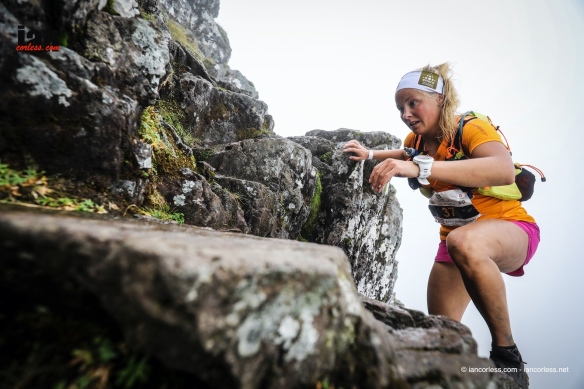 The aid station at the road crossing provided a huge boost and psyched me up for the big climb ahead up to the Aonach Eagach ridge – it also provided me with a finger of fudge; something I don’t think I’ve had since I was 12! The crowds were in full voice and I was still buzzing a couple of hundred vertical metres up the hill. Stretching back into the mizzle it was clear to see that competitors were tiring. The final big climb took chunks out of people as it demanded payment for admission to its playground.

Traversing the Aonach Eagach ridge was a pure delight. I can only imagine how spectacular it is on a clear day, but frequently either side of me just dropped off into the cloud I was occupying. The narrow band of rock floated in the clag as it was slowly soaked to add extra tension. Traversing exposed ridges at speed is about those few crucial first moves. Get them right and confidence starts to flow along with the speed. Get them wrong and the pace slows to a crawl as doubts get the better of you. Fortunately for me the first few moves went well and had all thrills and no terror.

The roped support on key sections was a welcome comfort before the rocky/ boggy run off back to the West Highland Way and that that crucial left turn that signals the final straight (which is actually very bendy). I have a tendency to finish strong, like my mind won’t allow my legs to unleash until it knows it will finish. Naturally this didn’t stop me feeling like the path was twice as long as it had been on the way out, but at least it was primarily downhill and fast.

Crossing the line I piled into the water, desperate to rehydrate and make up for the lack of water source on the Aonach Eagach ridge. Entering the Ice factor climbing centre the warmth hit me in two ways, but the physical was nothing compared to the warmth provided by the sentiment and camaraderie of other competitors. Tucking into some post-race food, chatting and surveying the room the buzz was electric. Something very special went on in Glencoe that day; and I feel privileged to have been a part of it.

Images from the Salomon Glen Coe Skyline are available HERE

You can read about the Salomon Mamores VK Here, the Salmon Ring of Steall Here and Salomon Glen Coe Skyline Here