In just over one month’s time, it all begins again, the Skyrunner® World Series fires up on the island of La Palma with what has become, in just two-years, an iconic Skyrunning race, Transvulcania La Palma.

To many, the growth and resurgence of Skyrunning in the last couple of years, triggered by the ISF (International Skyrunning Federations) foresight to hold a conference, ‘Less Cloud, More Sky’ after the 2012 Transvulcania may have many new Skyrunners thinking that our sport is just a few years old… They couldn’t be further from the truth!

Kilian Jornet’s new movie, Déjame Vivir, the second in his ‘Summits of My Life’ project, documents his 2013 season; wonderfully capturing the history of the sport of Skyrunning. ‘Fila’ clad Skyrunners pushing boundaries on snow capped peaks around the world on old footage from Transworld Sport. Conversations with Bruno Brunod about the Matterhorn summit record and of course, ISF President, Marino Giacometti talking candidly to camera. 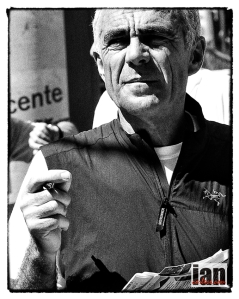 Born on the slopes and summits of Monte Rosa and Mont Blanc, Skyrunning dates back to 1989 when Giacometti set a record running from the village of Alagna to the summit of Monte Rosa. It was a new sport, a sport of Alpinism without the clutter of ropes and heavy packs. It was about going fast and light to the mountains, summiting and returning as fast as possible. A sport where earth meets sky!

‘There is nothing new in Skyrunning. It is just now that everyone is catching up with our vision from so many years ago,’ Giacometti explained, ‘The creation of an ultra series of races is just what the Skyrunner® series required in 2012. Today we have a new breed of runner who is actively looking for technical, steep and demanding courses over longer distances.’

In addition, 2014 will see the Skyrunning World Championships take place in Chamonix, arguably, the endurance capital of the world. It will be a great showcase for the sport and it coincides perfectly with the ever-expanding Skyrunner® National Series.

The inclusion and growth of the Skyrunner® National Series has also shown the sport we love reach new heights. Just recently Canada announced a new series under the watchful eye of Adam Campbell, the USA series has been created by Ian Sharman and one-by-one more series follow; South Africa, Australia & New Zealand, United Kingdom and Russia to name just a few.

Transvulcania La Palma will kick-start the 2014 Skyrunner® World Series and once again, fifteen iconic races over the classic distances of VK, SKY and ULTRA will see the worlds best Skyrunners®, do battle on the slopes and peaks of the worlds mountains.

An exciting year of high altitude drama awaits; Anna Frost, Nuria Picas and Emelie Forsberg will join new Skyrunners® Krissy Moehl, Jodee Adams-Moore and Cassie Scallon on the slopes of the Fuencaliente lighthouse on the weekend of May 10th.

A new year, a new Skyrunner® World Series and without doubt, new memories and moments that will be remembered in years to come!

Don’t miss out on the Skyrunner® World Series 2014.

Total prizes:  US $ 25,000. Titles and prizes will be awarded in each Series as follows:

*Entry is direct with organizers.

Slots and benefits are available for 2013 SWS and ISF Ranked athletes.