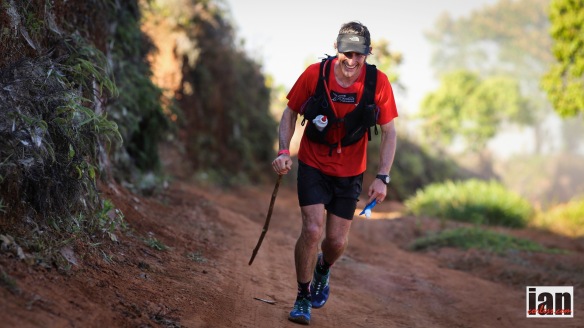 Iain Don Wauchope threw down the gauntlet today! From the gun, he pulled away from every runner in the race and provided a master class of multi day running. From beginning to end, Iain applied the pressure and at no point looked in any difficulty. Climbing the relentless hills and running the descents the clock ticked and by the time the finish tape was broken, Iain had set a new course record for stage four of the TCC… In 2014, Salomon athlete Philipp Reiter had run a fast stage while he battled with Michael Wardian. The time he posted was a new CR; today Iain broke that record by twenty-one minutes. Post race Iain said, “As each day passes, I am getting stronger and stronger. However, nothing is guaranteed.”

Day four was always going to come down to a battle between Iain and Mike Murphey. Mike pushed from the off but had two stumbling blacks: Iain Don Wauchope in the form of his life and unfortunately a bad stomach. The combination of those two elements effectively put an end of Mike’s opportunity to re-grasp a hold of the race. He continued to push, ever the optimist but the writing was on the wall.

The battle for third place was turning into a real nail biter as Youssef (3rd place) and Roiny (4th) went head-to-head looking for the final podium place and maybe most importantly, first Costa Rican. Roiny pushed hard and maintained a small lead throughout the race. His work rate looked too high as sweat poured from his body. But he held on and eventually gained a couple of minutes in the closing stages to take a slender lead and third on general classification.

Speedgoat Karl ran great for 30km but the heat and humidity took its toll and he was forced to slow in the latter stages to avoid heat stroke. Joe Grant after a tough third stage had a good fourth day after strapping his badly strained ankle.

Anna Frost and Veronica Bravo looked to be having a repeat performance of day three as they approached Cp1 almost side-by-side. The only exception came from Frosty. Every now and then she would pull away on the climbs so that she could run the descents with less pressure. Frosty was however struggling from plantar fasciitis and in the latter stages of the race, Veronica slowly pulled away on the final descent. At the breaking of the tape, Veronica had gained six minutes leaving her just ten minutes behind on GC. With two stages to go, can Veronica pull back that time? 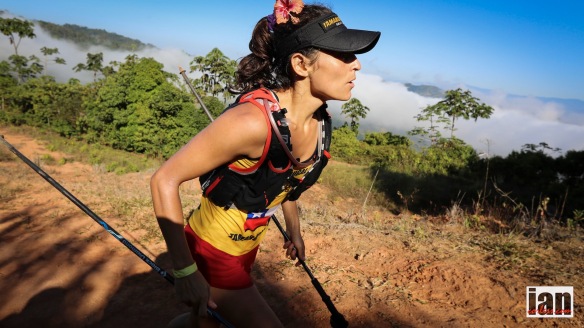 With just two days to go, runners are now on the home straight but the racing is not over. Iain Don Wauchope now has a convincing lead but as this race has shown, nothing is guaranteed…. Anything can happen! Third place overall is a Costa Rican battle and that position is certainly not decided yet. For the ladies, Frosty has a strong lead but Veronica is a fighter. It’s going to be interesting