The Skyrunner® World Series continues in Montana, the USA with three races at Run the Rut, today it was the Lone Peak VK. It may not be the steepest VK on the circuit but it certainly is dramatic with the finish line high in the sky and always visible. Well, that would have been the case had the VK route not been changed… Weather in this area can change in just 5-minutes and storms had been predicted for the afternoon. It’s always a tough call for a RD but Mike Foote took the cautions to heart and had his team mark an alternative route. He made a call at midday and decided on an alternative route that reduced the climb by 300m to 700m vertical gain and a distance of 2.3 miles.

The route was somewhat steeper and more direct in the early stages and followed the ethos and principals of Skyrunning perfectly, start low, get high! At the Bone Crusher, the runners should have gone to the impressive Alto ridge, here it gets steep, gnarly and technical with plenty of hands-on-knees action and scrambling with some via ferrata before the final sections of exposed rock and loose terrain to the summit. The re-route missed this section, dropped down a short descent and then once again climbed up through a steep section of loose rocks and scree. It was challenging but considerably less challenging than the original route.

The early stages were always going to be about finding a rhythm and tackling the early steep and slippery gradients. The route was wide though and overtaking was no issue.

Ondrej Fejfar and Jan Margarit Sole pushed from the start and both looked very strong at the midway point before the more technical sections started. Ondrej looked in control though holding a good gap.

In the ladies race Cynthia Arnold looked to be closing the gap on the expected victor and leader Laura Orgue. Laura looked less comfortable than normal, occasionally looking behind to see where Cynthia was but I think all along it was about doing enough to win and not expending too much energy. Maria Zorroza was running a strong race in 3rd but would she stay ahead of her team-mate Aitziber Iberia ?

In the men’s race, Ondrej was in a class of his own on this shorter course and finished clear of Jan by 24 seconds.

Scott Patterson was a surprise 3rd (he is a ski mountaineer) ahead of race director, Mike Foote who looked to be having a blast on his new course, Salomon Team Manager, Greg Vollet finished 5th.

Surprise of the day was expected winner, Ferran Teixido who finished 7th obviously having a below par day potentially due to the more runnable re-route and altitude?

In the ladies’ race Laura finished a strong 1st 41-seconds clear of Cynthia and Maria 3rd +2:16 back. 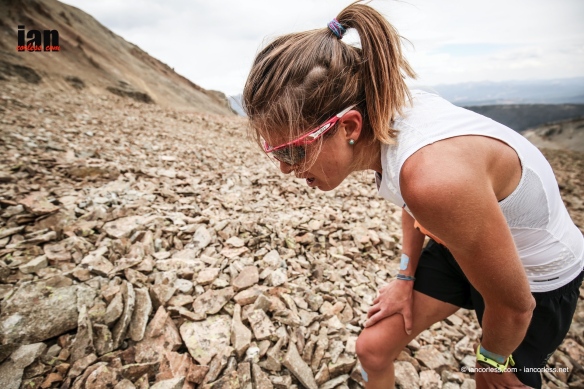 Altitude played a key factor in the Lone Peak VK, starting above 2000m it is very difficult for those with little or no adaptation. When combined with challenging terrain, this only adds to the problem. Unlike other VK’s the Lone Peak VK is unique with its mixture of surfaces. The loose and large rocks create many frustrations as often it stops participants getting a rhythm, this is contrasted by the early sections when it’s possible to find a good momentum despite the steep gradients.

Attention now turns to Saturday’s 28km event which starts at 0800, you can read a preview HERE. This event, as last year, will prove to be fast, the mixed terrain includes single track, jeep roads, alpine ridge lines and at the summit of the iconic Lone Peak a gnarly and technical descent brings the runners back to the resort of Big Sky where the race started.  The race has 2375m of vertical gain with a low point of 2286m and a high point of 3403m. Ones to watch are Laura Orgue and Yngvild Kaspersen who will also have run the VK and Megan Kimmel who is the outright ladies favourite. In the men’s race, Marc Lauenstein and Dakota Jones head up a strong mens field.