The race will be held from September 25-30 and it will have a maximum of 500 runners.

This morning, Fuerteventura hosted the official presentation of the Half Marathon des Sables, a spectacular stages race which will take place between the 25th and the 30th of September 2017.

The president of the Cabildo de Fuerteventura, Marcial Morales, the race’s directors, Patrick Bauer and Fernando González, and Mario Valle in behalf of Playitas Resort assisted to the act.

The legendary Marathon des Sables has been held in Morocco since 1986, and it is one of the most famous stage races all over the planet. It will now expand to Europe and America. Fuerteventura has been the selected place for it, as Marcial Morales explained: The European edition will be in the South of Fuerteventura, which gathers the required conditions for an international, self-sufficiency race as this one. This will mean an enormous boost for the island as sports destinations”.

This first edition will have a maximum of 500 runners coming from all over the World, who will be the best promoters of Fuerteventura’s beauties and its perfect conditions as a destination for this sport which has experimented such an enormous growth in the last years.

The sandy and desert-like landscapes in Fuerteventura will be essential for this kind of event. This is one of the reasons why Patrick Bauer, the race’s founder, chose this place in the Canary Islands for it.

Patrick Bauer wanted to thank the collaboration of all the administrations which will make the Half Marathon des Sables Fuerteventura possible. He described the island as wild, with a unique nature and with similar weather conditions as Morocco.

Bauer revealed that the event will take place from the 25th to the 30th of September 2017. The race will have the the same philosophy as the original one: a multi-stage event, in self-sufficiency where you fight against yourself in a desert like landscape.

The total distance will be of 120 kilometres, divided in a yet undefined number of stages. The race will have a couple of basecamps during the course, starting from the South of Fuerteventura and ending in Gran Tarajal.

All the runners who are accepted for the challenge will receive a specific WAA tent, where they will be able to sleep during the race, as well as some carbon hiking poles.

Bauer wanted the presence of Arista Eventos in the direction of this prestigious multi-stage event. Thus, Fernando González and David Déniz, managers of the company in charge of races such as Transgrancanaria HG or Haría Extreme Lanzarote, were both present in the presentation. Amongst other tasks, Arista will handle the logistics of this massive event. To learn about the philosophy of the race, they will assist to Morocco in April to live the African event. 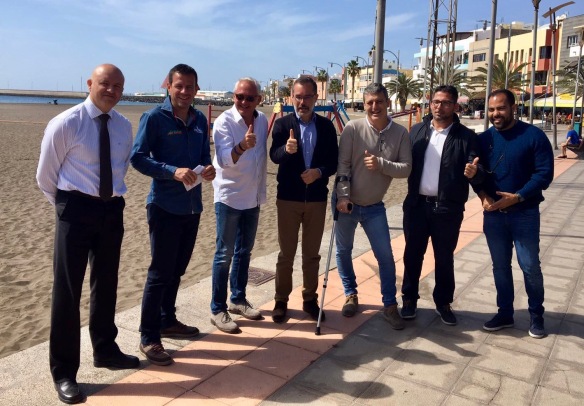 Mario Valle, in behalf of Playitas Resort, was also in the presentation as they will also collaborate with the event. “We’ve been promoting the sports and high quality tourism, and that is why we will support the celebration of the Half Marathon des Sables in Fuerteventura, in collaboration with the Cabildo de Fuerteventura with the only goal of having a successful event”, he stated.

3 thoughts on “Fuerteventura hosts the Half Marathon Des Sables ”