It all dates back to 1932 (actually earlier) when a certain Bob Graham broke the Lakeland Fell record by traversing 42 fells and peaks within a 24-hour period, he ran 23:39. The ‘round’ has since become synonymous with fell runners as a bucket list item to do.

Bland’s record has been considered almost untouchable… many have tried, but the difficulty of the route, the distance the elevation gain and loss, the need for a team of helpers to run the legs and of course the weather, all must combine for a perfect storm.

Fell runner’s looked at Paris’s run and realised that Bland’s time was possible. It was something that Bland himself agreed on. He has often stated that the record is there to be broken and he couldn’t understand why nobody had.

The route can be run clockwise or anti-clockwise and starts at the Moot Hall in Keswick.

The summits are as follows:

Kilian Jornet has always been interested in the history of running and the Bob Graham Round has certainly been on his radar for some time. However, his Summits of My Life project had most certainly been a priority ever since 2012. But in 2017, this project was complete and he was now open to new possibilities. In September he came to Scotland to race the Glen Coe Skyline, a race that he won. He had considered an attempt at the ‘Bob’ before or after, however, conditions in September were not ideal, so, the project was shelved.

In early 2018, Kilian suffered an accident in a SkiMo race, he broke his leg, this put him out of action for months. However, he dedicated himself to recovery. At times using cycling to keep aerobic fitness and then when allowed by doctors, he returned to the mountains. Not running, just doing big days with the aim of regaining mountain fitness without damaging his fragile leg.

In June, Kilian could see light at the end of the tunnel and he decided, after clearing with medical teams, to return to racing at the Monte Rosa Sky Marathon (here). In all honesty, it was the perfect return event… You see, Kilian has very much based his career around Skyrunning following in the footsteps of Giacometti, Meraldi, Brunod and De Gasperi. The event had not run for 25-years but the Monte Rosa Skymarathon was ‘the’ event that created the sport of Skyrunning. Racing in teams of two, Kilian teamed up with his partner, Emelie Forsberg and the duo created a new part of history… Emelie dictated the pace for the duo and in the process set a new FKT for Alagna-Monte Rosa- Alagna. Kilian was back?

Well, even Kilian was unsure? In his words, “Next week I run the Mont Blanc Marathon, this is a fast running race and I am just not sure how I will feel with such an effort? My leg feels good but this will be a test!”

Mont Blanc Marathon arrived one week later and amongst a world-class field, Kilian won. It was an incredible return and one that confirmed that Kilian as the supreme sportsman that he is.

Well, in Monte Rosa, I had discussed the ‘Bob’ with Kilian and he said it was on the cards, and that he just needed the window of opportunity, the weather and the correct people in place.

Cut to early July, just day’s after Mont Blanc Marathon and Kilian arrived in the Lakes. He was on the fells and doing a recce of the route. The weather window was good and with some frantic planning, an attempt was put together.

0600, July 8th. Kilian departed the Moot Hall, Keswick on his first attempt at the Bob Graham Round.

It’s important to clarify and Kilian is the first to acknowledge this, that any record attempt on the ‘Bob’ is not possible without the right people. For clarification, to run an official Bob Graham Round you must have runners with you at all times to help pace, navigate and confirm that you reach the summits. The Bob Graham Round club are very active in helping with this process. It is allowed that these ‘pacers’ can mule for the runner.

Kilian had a line-up of pacers that are world-class, nothing else would do! Let’s face it, if the record was on, he’d need people that could not only navigate the best lines and route, but also be able to keep up! Somewhat intimidating to know that you will need to run with the best mountain runner in the world.

The route is broken down into ‘legs’ and the pacers work on certain legs and are then replaced by fresh runners for the next leg – for the pacers and navigators, it’s like a relay. For Kilian, it’s an all out run as fast as you can loop.

Early reports came in that he was 6-7 minutes up on the record – I posted this around 10:20am so Kilian had already been going 4-hours.

At 11:23 I posted that Kilian was on leg 3 and had 21-minutes on Billy’s time. It was getting exciting… Temperatures were rising and Kilian had a sting of supporters.

I had reports coming in from friends on the course and I was doing my best to build a picture of Kilian’s progress. I joked that Kilian was moving so fast that by the time I had an update, it was old news.

It soon became clear that the record was not only on, but it may will be obliterated.

Kilian arrived at Dunmail with 4:30 elapsed and this placed him 30-minute UP on Billy’s record.

It was a hot day though, anything could happen…. And what about Kilian’s leg, would it hold up to the relentless fells?

At Harrison Stickle, Kilian arrived at 11:51 am with approximately 5:51 elapsed – the record was really on and excitement started to grow. 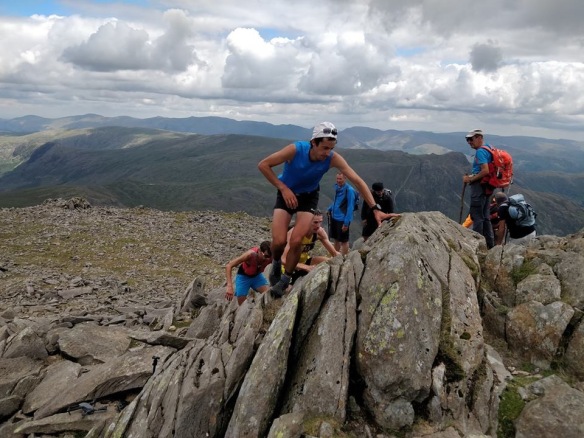 Bowfell came at 12:45 with 6:45 elapsed. He was looking fresh and reports confirmed that he was moving well.

The pace was relentless and the support incredible.

Good friend and experienced fell runner, Kim Collison confirmed that Kilian was 34mins UP on the record at Scaffell Pike – history was being written on the Lakeland fells!

Social media became a frenzy of Bob Graham hashtags and by early afternoon, many began to realise history was going to be re-written, a 36-year record was going to fall barring a disaster.

The Moot Hall, Keswick soon became a new meeting point for Sunday night as runners from over the UK made the journey to welcome Kilian home.

Amelia Hunt confirmed that Kilian passed Yewbarrow at 14:00hrs – that placed home approximately 40-minutes up on the record.

As Kilian entered a network blackout area, a lack of updates left questions on how fast he was going and then suddenly I had a confirmed report that he was approximately 45-minutes ahead of Billy’s record… was this possible? Was it possible that he could be going so fast? 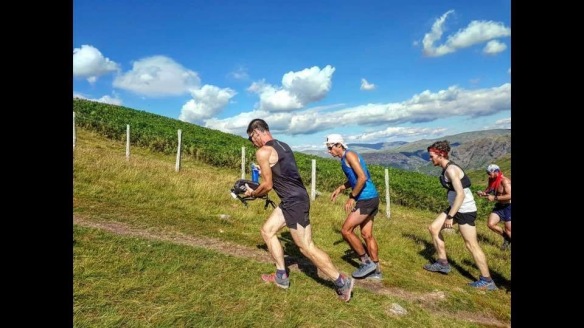 Finally an update came from Honister Slate Mines at 1700 hrs +/-.

Kilian arrived at the final summit Robinson at 17:52 – the record was going down and by a big margin!

At 18:20hrs Kilian arrived on the road at Little Town and before we knew it, he was at the Moot Hall.

IT IS OFF THE SCALE. 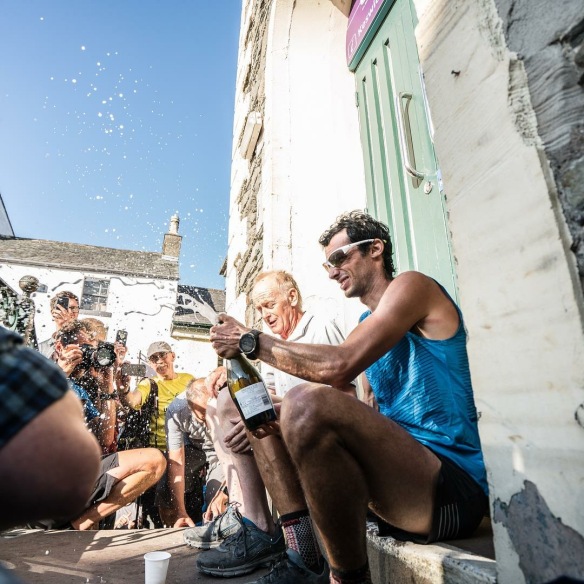 In the words of @kilianj

“Thanks Billy, I had better conditions than you, the best pacers and your inspiration to give everything! And even like that it was sooo sooo hard!!! Thanks to Carl, Chris, Martin, Josh, Jebby, Steve, Paul, Andrew, Neil, Paul and all the guys who has been helping out, without you guys it wouldn’t been possible ! Big big thanks to Martin for making it real and such an organization last minute, thanks Shane, Thanks Jordi and thanks all the people cheering on the route. This Bob Graham Round was an amazing experience!” Photo ©timharper shared from Kilian’s IG account.

As I write today, I still struggle to comprehend the speed at which Kilian completed this route and a huge credit must go to the team behind this. Kilian had the ‘best of the best’ to pace and navigate him. Without them this could not have happened. He had perfect weather, maybe a little too hot for some? And the ground conditions were ideal enabling a fast time.

Like I said, it takes a Perfect Storm for a record to happen. But Billy’s record was just beaten, it was elevated to a whole new level. Just think, Billy’s record has stood for 36-years, how long will Kilian’s stand for?

Records are made to be broken and this is one record that elevates Kilian to a whole new level and I think finally, he may well get the respect from many who have said that he is not a ‘runner!’ With this record, he has done something so special, it is a great sporting achievement that should be embraced by all. It’s not fell running, mountain running, ultra running, Skyrunning or any label, it is just running – let’s embrace it for that.

Kilian undertook this FKT attempt in the true spirit of the ‘Bob,’ *it was low-key, without grandeur, without PR, without announcement, without film crews or photographers – it was man agains the fells. It says a great deal about the man and his character, he is a true ambassador for the sport. Post his finish in Keswick, he returned to the steps of the Moot Hall and sat for a hour with the assembled fans to ‘give back’ as he chatted and posed for photos.

Sporting achievements come and go, some truly last the test of time. Billy Bland’s record stood the test of time and now we have a new level. I personally can’t foresee this record being broken for many a year? But in year’s to come, I will be able to look back at July 8 2018 and remember that I witnessed a truly great sporting achievement by a truly great man. The word legend is used a great deal, in Kilian Jornet we have a living legend.

I will be interviewing Kilian on July 10th or 11th and his interview will be on Episode 159 of Talk Ultra podcast (Here). It will also be transcribed and post as word interview on this website.

*It came to light after the event that Lymbus employed a film crew and photographers to document Kilian’s BGR. At the time off writing this was unknown to me and I think to the general public. I still stand by the fact this attempt was low-key and without fanfare. Having now interviewed several of the pacers who helped Kilian on the legs, they have also confirmed that Kilian was ‘in the true spirit’ of the Bob Graham.