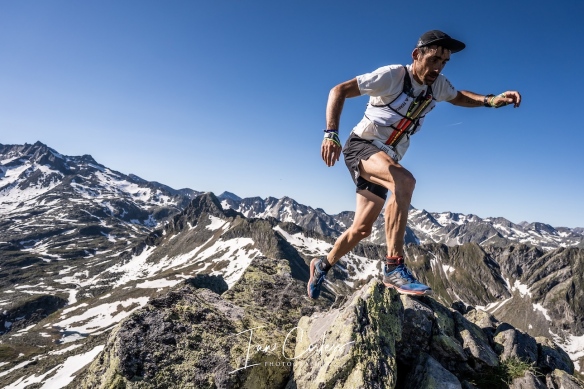 As events go, adidas Infinite Trails has set a new benchmark. I think it’s fair to say that the weekend of activity put together in Austria has elevated trail running to a whole new event. Imagine the best trail running race in the world, then add a three day running festival full of talks, workshops and demos. Then add the most incredible and seamless organization I have witnessed and to add the icing on the cake, Austria, the Austrian amphitheater of mountains and the event location of Bad Hofgastein – you have the makings of what will become an iconic event, mark my words.

Quite simply, adidas have stepped up their game in trail/ off road running. The TERREX brand has existed for some time, but the impact on the trail running community has been minimal. Even with the presence of Luis Alberto Hernando who has been flying the adidas flag for many years.

Dmitry Mityaev and Ekaterina Mityaeva have added to Luis’ trail prowess in recent years, particularly in skyrunning. But in 2018 something changed (probably earlier) as adidas signed many new athletes to the team – Timothy Olson, Yngvild Kaspersen, Tom Evans, Holly Page and Sheila Avilés to name but a few. This was clearly a statement from adidas, ‘we are coming!’

And coming to the trail world they are, Infinite Trails World Championships proved this. 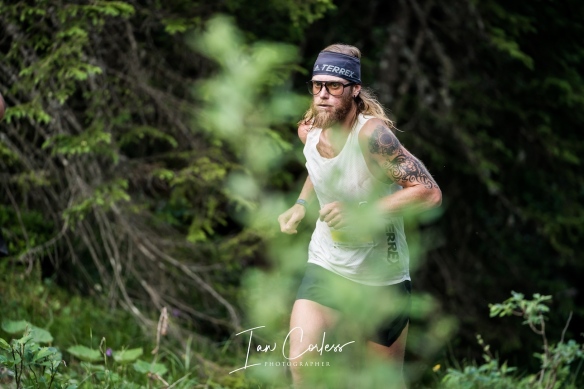 Firstly, the event. The concept is simple but also unique. Teams of three come together, they can be all male, all female or mixed. On the Thursday at 6pm all runners run a mountain prologue – this year it was a 15km event with almost 1000m of vertical gain. The time for each team member is recorded and the team times are all added together. This creates a start time for ‘race day’ with the fastest team going first and then all other teams start based on their respective times to the fastest. It’s a chasing start and an algorithm is used to work out the order.

Race day is Saturday and kicks off at 0400 with loop 1. The race is made of 3 loops and each has its own challenges and distances. Loop 1 25km, loop 2 60km and loop 3 39km. But distance only tells part of the story. The trails and mountains in this area are truly beautiful, magnificent and yes, brutal. At times technical, each loop also has much vertical gain and descent. Without doubt, loop 2 is the highlight, not only visually but in severity.

One runner takes on loop 1, one loop 2 and one loop 3. The objective is to finish each loop as fast as possible, pass on to the next member of the team and then after the final loop 3 is completed, all three team members run a final 700m loop around the town of Bad Hofgastein, the fastest are World Champions. 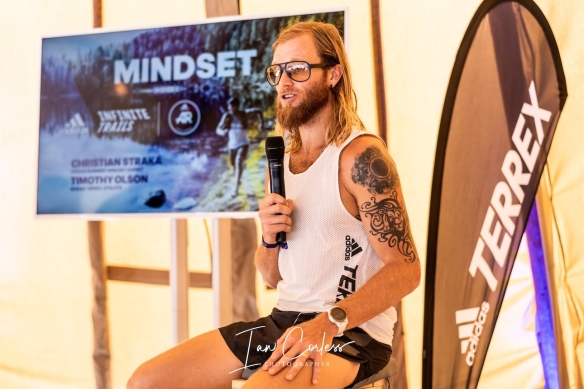 But the weekend is not only about racing. This event is all about community, a coming together of like minded people in a stunning location and all enjoying some trail love.

As one runner said to me, ‘We have the stars of the sport here like Luis, Timmy and Jasmin, but we are all made to feel like rockstars.’

And that was the theme of the weekend. Most certainly the three person team format brings a whole new dynamic, but it was the events around the weekend that made me feel like I was at a ‘Glastonbury’ for running. There was an athlete panel talk, talks on Mindfulness, and nutrition. You could test run Terrex shoes. It was possible to create your own ‘tie died’ Terrex T shirt. Yoga classes were available and on the Friday before the race there was a brunch were all food and drink was provided free. 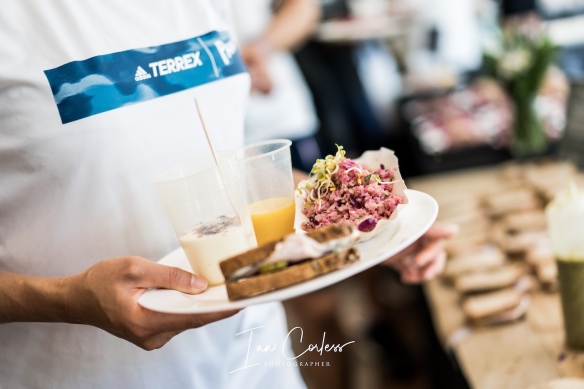 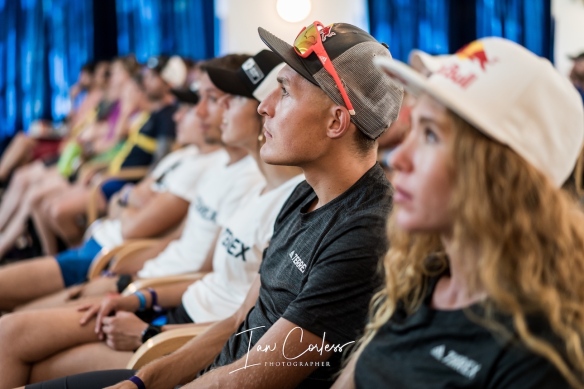 Race day needless to say was a full on day, with runners, staff and the village pretty much on standby for 24 hours.

Austria, like much of Europe was blessed with a heatwave that gave blue skies, perfect visibility but intense heat.

Runners on loop 1 were blessed with a 4am start, for all of them, they were done before the heat of the day really kicked in. 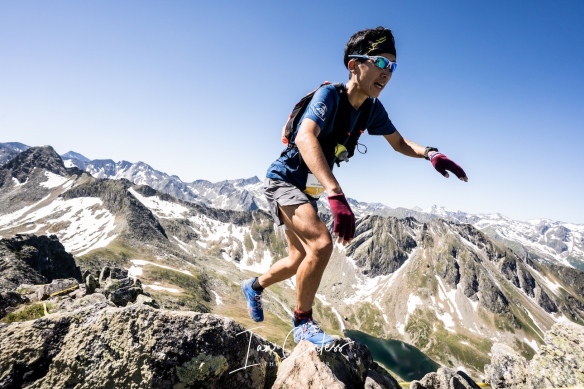 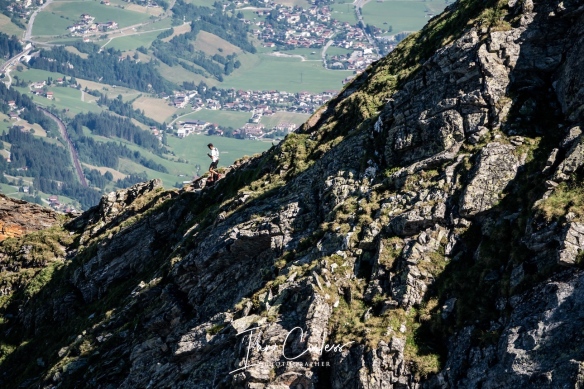 Loop 2 was a visual masterpiece of stunning views, relentless climbing and descending and some truly challenging technical terrain. Combined with the heat, loop 2 was brutal. Luis Alberto and Amy Hall lead the way for their respective teams and neither found it easy, so you can only imagine the carnage and pain behind. The 2019 Infinite Trails will be remembered for loop 2.

Each loop had its own cut off time. If a runner failed to arrive before the cut off, the next runner could leave but of course, they would be out of the ranking. For loop 2, this was 1900 hours and as the clock chimed, the severity of the second loop was obvious with many loop 3 runners leaving before the arrival on their 2nd team mate. 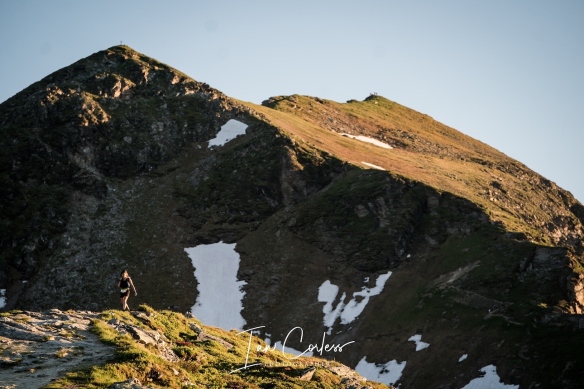 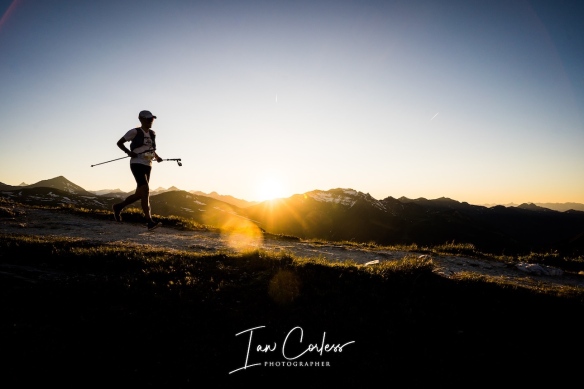 The atmosphere at the finish was electric with one of the most impressive start/ finish lines I have witnessed. Due to the nature of the event and the constant arrival and departure of runners, there was always a big crowd. As night came, it felt more like a rave than a race. Music screamed out, panels were illuminated and a constant light show welcomed the runners all the way through to the 1am cut off, remarkably the last team arrived just 20-seconds inside the closing of the race.

Of course, World Campions were crowned and the dream teams of Dmitry Mityaev, Luis Alberto Hernando and Timothy Olson were the male champions. Yngvild Kaspersen, Ekaterina Mityaeva and Jasmin Nunige were the female champions.

But as was said previously, everyone was made to feel a champion in an event that really marks a new era for trail running. In 2019, 200 teams toed the line, in years to come, I can see those numbers increase significantly and of course, the dream scenario would be to see teams come together from other brands. Imagine it if Salomon, The North Face, Scott, Nike, La Sportiva, inov-8 and so on, assembled teams of three to see, who are the Infinite Trails World Champions.

I for one cannot wait to see this concept grow and certainly, adidas with the Terrex brand will now be making significant impact in the trail running world. A true sign of this is shown at Western States.

While the whole Terrex team celebrated and embraced Austria, the UK’s Tom Evans toed the line of the iconic WSER in Squaw valley, USA. A new year signing to adidas, this was Tom’s first hundred miler. He crushed it, not only running under the iconic 15-hour mark put placing 3rd overall, a truly remarkable result.

If you love running, if you love trail, if you love the community of off-road running, then the Infinite Trails is for you. I cannot encourage you enough, get a team together, travel out to Austria and experience something truly special in 2020. 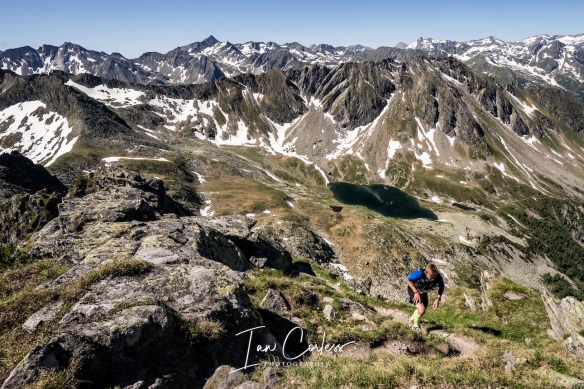