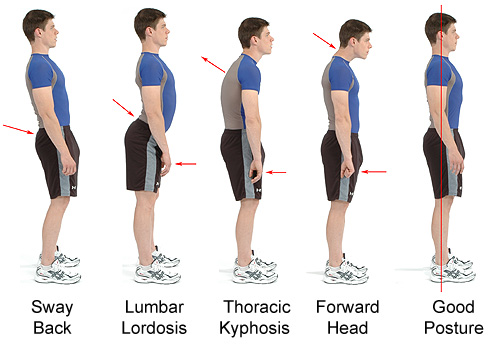 Okay, so we’re now onto part 4 of the series and this week we are looking at exercises to correct anterior tilt of the pelvis, which creates the lordosis posture. If you’ve not yet read parts 1, 2 and 3 read them HERE, HERE and HERE.

The breathing issue is interesting for me as it’s something i’ve suffered from myself and couldn’t find a cure. They symptoms were very rapid and shallow breathing, I also felt that I couldn’t breathe deeply from my diaphragm. The best way to describe it was as if the bottom 2 thirds of my lungs didn’t work and i was just rapidly shifting air in and out of the top third. It felt to me at the time as though I had exercise induced asthma, there was some ‘wheezing’ which is a symptom of airway problems, so I went through that process and resolved nothing. The rapid shallow breathing was often, but not always linked to a pain under my ribs which most people would commonly refer to as a stitch. In a few triathlons I had to slow down to get rid of it, by relaxing and breathing deeply.

The key to resolving it was when i noticed that it was occuring more frequently in triathlon training and racing, compared to just running. Basically, it was a lot more likely to happen if I biked first. That got me thinking about posture and how it was affected by riding my bike before running. I soon noticed that I had a more pronounced lordosis posture (anterior tilt) after riding hard in the aero position then attempting to run. Interestingly, since identifying this problem i’ve spoke to more and more people who suffer stitch and breathing difficulties running in triathlon and a lot of them tend to be  children.

So what’s going on?

Time to post our anterior tilt photo again, it feels only right we put it in this final issue. I’ll start by saying that

this is purely my own thoughts and ideas, based on things I’ve tried which have worked for me. Nobody has given me a decent answer to why I had this recurring stitch or breathing difficulties.

Take a look at the photo right and picture the ‘abdominal cavity’. The abdominal cavity is the space which contains your intestines and in simple terms it’s a box with front, back, sides, floor and ceiling. The pelvic floor is underneath, the abdominals, lower back and obliques (muscles on sides) make the front, back and sides and your diphragm is the ceiling on this box.

If you have anterior tilt, this box becomes ’tilted’ out of position. If fact, it isn’t a box any more, it’s more like a rhomboid shape. If you don’t know what a rhomboid is, google it!! Keeping it simple, it’s fair to assume that if your diaphragm is pulled in an odd direction and out of position, it probably won’t pull down and allow you to deep breathe very well.

I’m trying. So having noticed this issue related to running after cycling and thinking about it way too much, I altered my posture when running. To my surprise, it was like someone has just pulled a giant plug out of my lungs and I could breathe normally!! I’ll explain the changes I made in as simple terms as possible.

1. To try and counter the upright / backwards lean I looked down at the road/track 15m ahead of me
2. Consciously held a slight forwards lean (my torso was slightly ahead of my pelvis)
3. Didn’t stick my chest out and shoulders back, moved shoulders forwards slightly (without hunching too much)
4. Pulled my belly in and avoided pelvis tilting forwards into lordosis

One final thing which can also help with the breathing issues, although not related to posture, is your stride rate. We are often encouraged to run or cycle with high cadences, 90 foot falls or 90 pedal revolutions per minute (or higher). Faster cadences for both cycling and running increase breathing rate. If you are struggling with rapid breathing, slow the cadence and stride out more (longer / slower strides), that can help to slow the breathing rate down.

Hopefully you can picture the changes above! I think it’s pretty common for runners who are tired and pushing hard to lean back, stick their chest out and look upwards. Thre result is a very upright and almost ‘leaning back’ posture. If you can relate to any of the breathing or ‘stitch’ symptoms above, then give the changes a go, see if they can help your run performances, if it works, i’d be interested to hear the feedback.

There’s one final thing I’m going to talk about which is issues related to cramping. I explained in detail during previous blogs, the reasons for cramping and how posture can be a direct cause. As this is the final part of the ‘trilogy’ (I say trilogy in the tenuous sense of the word), I wanted to specifically answer a few questions which had been emailed, largely relating to cramp in the calf during open water swimming.

As per previous blogs, it’s nothing to do with salts etc the issue may well be related to changes in length and muscle stretch receptors / nervous system confusion. I’ve suffered from this issue and have a simple plan to resolve it. When swmming, your calf is in a shortened position and if it remains shortened for a long period of time, it can go into spasm. You need to remind your calf of it’s original length at regular intervals, so try this:

1. Every 3 minutes, pull your toes up to gently stretch your calf. Do it once on each leg and you don’t have to hold, just stretch and release. This inhibits your swimming slightly, but it’s not going to slow you more than 1 second at most!
2. You need to do it at regular intervals, not just in reponse to the cramp, so make it a habit every 3 minutes.
3. It needs to be gentle movement, don’t do a sharp stretch of the calf, which can also trigger spasm.

Sports Science lecturer for 10 years at St Helens HE College.

In 2010 established The Endurance Store triathlon, trail running and open water swimming store. Based in Appley Bridge, Wigan, we are the North West’s community store, organising and supporting local athletes and local events.

Check out the endurance store HERE