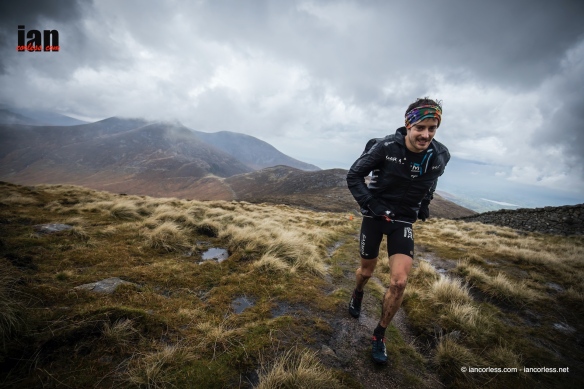 The skies went dark and the clag came in, the 2016 Garmin Mourne Skyline MTR started under stormy skies as torrential rain soaked the runners. On the stroke of 0900, the runners departed the coastal town of Newcastle ran into Donard Park via the promenade entrance and then climbed the Granite Trail for a long and relentless climb.

From the off, Salomon International athlete Roki Bratina dictated the pace as a small group followed lead by local runner Eoin Lennon, the Team Garmin Adventure athletes of Julien Jorro and Germain Grangier and Chris Arthur.

Jasmin Paris, as expected dictated the ladies’ race but Skyrunning UK Series leader, Sarah Ridgway was very close by and keeping the inov-8 athlete insight as was Katie Boden who also was in search of valuable ranking points.

A race within a race was also happening for the men as Bjorn Verduijn, Michael Jones and Ben Hukins all fought for points and places in a bid for the 2016 Skyrunning UK Series title. It was Bjorn’s title to lose but on the first climb, Ben was dictating the pace followed by Michael and Bjorn, although trailing was looking relaxed.

After two hours of running, the heavy rains subsided and the skies opened up to reveal the majestic Mourne Mountains and the ever-present Mourne Wall that weaves its way across the landscape.

At Hare’s Gap, the first major peak waited: Slieve Bearnagh. The runners first passing the North Tor before reaching the summit quickly followed with the technical ascent of Slieve Meelmore. In the ladies’ race, Sarah Ridgeway had taken the lead, Jasmine feeling a little tired and jaded after a full-on racing year. For the men, Germain Grangier was showing the rest of the men a clean pair of heals. Chris Arthur had him in sight and Roki Bratina was in 3rd.

The climbs and summits were coming thick and fast now; Slieve Loughshannagh, Slieve Meelbeg and the course continues to follow the Mourne Wall leading to a repeated climb of the technical and challenging Slieve Meelmore, this time in the opposite direction. The toughest climb of the day follows, Slieve Bearnagh.

From Hare’s Gap a steep climb next to the Mourne Wall brings the runners Slievenaglogh and Slieve Commedagh. The race was now taking shape, Germain looked controlled and relaxed as he pushed his way up the climb. Chris also looked relaxed and Roki looked focused with a determination to close the gap on 2nd and potentially reclaim the lead. One of the pre-race favourites, Eoin Lennon complained of not being able to climb despite running in 4th place.

Jasmin Paris had now reclaimed the lead and Sarah trailed by just a few minutes with a flash on inov-8 red constantly pulling her up the muddy and challenging terrain.

The highest point of the course at Slieve Donard signified the end of the climbing and from here on in, a relentless drop to the finish followed the Mourne Wall before turning right and re-tracing the morning’s early climb before taking the Glen River Path to Donard Park and the finish line.

Germain’s victory never looked in doubt, he was super smooth and super strong all day – his new course record 3:49:39 confirming this. However, pre-race favourite Roki Bratina closed a 5-minute gap from Slieve Commedagh showing some supreme descending skills to finish 2nd in 3:50:17. Chris Arthur finished 3rd with local Eoin Lennon holding on to 4th ahead of Michael Jones.

Despite all his efforts, Michael’s 5th place was not enough of a gap over Bjorn Verduijn’s 10th place and therefore the 2016 Skyrunning UK Series title was awarded to Bjorn.

Jasmin Paris, despite a deep tiredness somehow managed to find the energy to hold off Sarah Ridgway and they finished, 4:30:02 and 4:34:10. Katie Boden finished 3rd lady and therefore moved up to 2nd in the Skyrunning UK Series ahead of Sarah Sheridan but it was Sarah Ridgway who was the outright winner of the series with 2 victories, a 2nd and 3rd place – great consistency!

The mountains of Northern Ireland may not have the height or elevation gain the Alps or Pyrenees offer, but what they lack in height is more than compensated for in technicality and repeated roller coaster climbing. Ask anyone who has run it, the Mourne Skyline MTR is no easy race.