The eyes tell the story—they look through you. Deep in focus, almost blinkered like a horse, Jo Meek has only one purpose. To run as fast and as efficiently as possible over six days and win the 10th edition of the 2014 The Coastal Challenge (TCC) in Costa Rica.

I had seen this look once before, at the end of stage 1 of the 2013 Marathon des Sables in Morocco. Sitting in a bivouac, Meek, 36, of Fair Oak, New Hampshire, had just excelled on the first day of the race. I, like others, looked around in wonder and asked the question, “Who is Jo Meek?”

Switching from the dunes of the Sahara to the beaches and rainforest of Costa Rica was always going to be a cathartic moment for Meek, particularly when one considered the slated seasoned competition: Julia Bottger, Veronica Bravo and Anna “Frosty” Frost. Unfortunately, Frosty had to withdraw from the race just days before the start. While disappointed at not having the opportunity to test herself against one of the best female mountain-ultrarunners in the world, Meek was unfazed: “It changes nothing. I am here to race and race hard. I would have loved to have Anna push me but you know what? I can push myself pretty hard.” 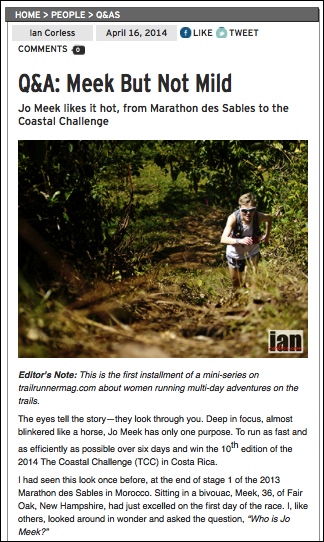