Following on from Transvulcania, attention this coming weekend turns to Zegama-Aizkorri and Menorca for the COMPRESSPORT TRAIL MENORCA CAMI DE CAVALLS 2015. 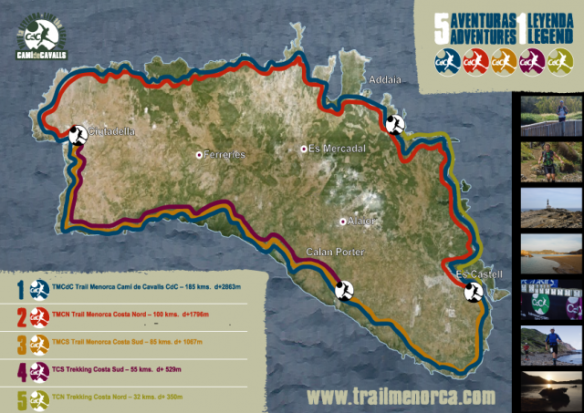 The Menorca Cami De Cavalls takes place on 15, 16 and 17th May on the beautiful island of Menorca. A series of races are offered that provide all those involved to see the beauty of this majestic island.

The island is known for its collection of megalithic stone monuments: navetes, taules and talaiots, which speak of a very early prehistoric human activity. Some of the earliest culture on Menorca was influenced by other Mediterranean cultures, including the Greek Minoans of ancient Crete . For example the use of inverted plastered timber columns at Knossos is thought to have influenced the population of Menorca imitating this practice. The location of Menorca in the middle of the western Mediterranean was a staging point for different cultures since prehistoric times. This Balearic Island has a mix of colonial and local architecture. Menorca’s cuisine is dominated by the Mediterranean diet, which is known to be very healthy. Whilst many of the locals have adopted modern attitudes they still uphold certain old traditions.

The TMCDC embraces the small island and utilizes the trails to full affect offering a series of races (five in total) that allow runners to participate in a race of 32km or a traverse of the whole island in 185km.

Trail Menorca Cami de Cavalls (TMCdC) is an ultra distance of 185,3 km and a positive slope of 2,863 m where each runner will discover their limits and enjoy an idyllic landscape on this island in the Mediterranean Sea, you will find beaches, cliffs, and incredible views.

The Trail Costa Nord (TMCN) explores the North of Menorca over a distance of 100 km. A positive incline of 1796m, runners will discover precious places in Menorca, beautiful trails and incredible views.

In the Trail Menorca Costa Sud (TMCS) you will visit beaches of white sand lapped by turquoise water and enjoy ravines and forests.

The first edition of the race was held in May 2012 with 270 participants. In recent years the amount of participants has been continuously increasing with 287 in 2013 and 646 in 2014. The 2015 edition will once again se the race reach a new level with a strong participation from respected trail, ultra and mountain runners such as:

Course records are as follows: