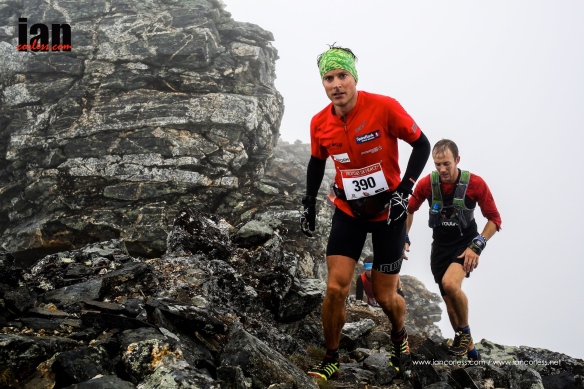 Listen to a full in-depth interview with Jonathan Albon on

There are many reasons Tromsø SkyRace was set to be one of the highlights of my year. Although a race, I was most looking forward to running in the mountains, crossing streams and the wilderness that this event was set to deliver. There were two race distances – the Tromsdalstind (short) and Hamperokken (long). I’d be taking on the full Hamperokken skyrace which is actually classed as an ultra, more for the time it would take to complete as a opposed to the distance, which was only a modest 45km but had a huge 4400m of elevation gain.

Knowing this was what lay before me it was with a sadistic smile that I learnt the night before the race that the ski lift to the start wouldn’t open in time so we would have to make our own way up to the start! ‘A good warm up’ Kilian said – well, he was probably right.

After reaching the start it wasn’t long before we were off. In an attempt to run my own race (unlike in previous races this year) I tried to start easy, warming up into it. It was hard judging were I was placed anyway as the short course started at the same time so I was content with just running. I started with the mindset that I didn’t care where I would place, I would run in the mountains and enjoy myself. So that is what I did. It wasn’t until the top of the first summit, Tromsdalstind, where we turned for a big descent splitting from the short course that I started to get a feel that I was in the top 10.

The summit was covered in snow and the route turned to just drop of the other side of the plateau over what looked like a cliff. It wasn’t until getting closer that you could see it was in fact an extremely steep snowy slope with a rope to assist descent. Thankfully this section wasn’t long but there were plenty more snow fields to slip and slide down on the rest of the descent. The majority though was on loose rocky terrain and steep muddy tracks. Before long I was reaching the valley floor and out of the thick fog, for the first time I could see further than a couple of hundred meters and the sight was surreal.

I had settled into a position next to a Swiss guy called Pascal Egli. He seemed to have the same happy attitude I had towards the race and we talked, joked and laughed as we crossed one of the only flat sections on the course between the two mountains.

Reaching the base of the big climb, Hamperokken, we were still together. After a third of the climb I let him go. I had by this point learnt he had come third in the Dolomites skyrace and had only finished something like 40 seconds behind Stian Angermund in the Tromsø vertical kilometer. I definitely didn’t feel worthy to be holding with him and felt I was either holding him back or I was pushing too hard. As it happened he never got more than 10m away. Running the majority but hiking the steepest gradients we were making good time…and catching people, passing two on the climb we just got another two as the ridge started. This put us in a group of 4 with only 1 guy ahead in the lead.

I noticed one of our group was Eirik Haugsnes. I’m not sure there would be anyone I would rather be following through what was one of the craziest sections of any race I have ever done. Eirik was last years winner and lives in the Troms area.

Describing the Hamperokekn ridge is difficult. For much of it I was using both my hands and feet for purchase. At one point of the razor edge ridge we had to jump a gap from one rock to another. It was funny to see how our little contingent had gone from racing to simply traversing this dangerous section together. I found myself at the back of the group least experienced in this sort of scrambling and twice found rocks tumbling down towards me from above.

The last 50m ascent to the top was described by Kilian in the race briefing as grade 3 scrambling. I’d describe it as ‘f***ing scary’. With this done it didn’t take long for the race to resume; as soon as we summited the group split as we started to descend. We had crossed paths with the leader, Alberto Hernando, on the way up and were only 2 minutes behind after over 3 hours of racing!

The descent was again as technical as it gets with large boulder fields and steep snowy slides. One particular section that sticks in my mind is where we traversed on snow just 5meters above where it dropped into freezing blue water of a big lake – one slide and you were toast (or ice more likely).

It was shortly after this point that the race started in earnest for me. As the four of us reunited crossing a boulder field it was clear my VJ Irocks were providing far more grip than my competitors shoes. This enabled me to pull away skipping over the rocks bouncing from boulder to boulder. Reaching more even ground with a small lead I just decided to run on and kept putting one foot in front of the other as fast as possible all the way back to the valley floor. 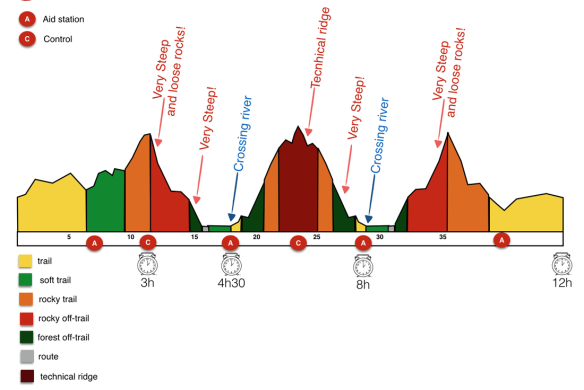 Coming back into the aid station I learnt I was 1 minute 30 seconds behind Alberto in first. Not thinking I had a hope in hell of catching him I continued to run at a comfortable but fast pace enjoying the brief flat section. Just two kilometers later I noticed I was gaining on a competitor traveling in the same direction as me, I double took not believing my eyes but I had just closed a big lead in next to no time. Coming up behind him I startled him as I don’t think he was expecting to see an Englishman popp up to say hello. I moved passed and at the foot of the last big climb heard a yelp from behind. I immediately stopped and turned, starting to head back, but he shouted at me motioning to continue. It looked as if he had gone over on his ankle. Obeying his command I turned back to the climb ahead.

I knew in my head this was a deciding moment. I would either start to climb and feel good or I would feel terrible and my chances would be nil. Either way I would know within a couple of hundred meters…so I started to climb. I can’t say it was easy but I was doing it. Moving uphill I was pleased with the strength I had. This section was too steep to run or even hike in some places, so using hands and feet I steadily clawed my way up.

About half way I hit the first of the snowfields, remembering coming down with such speed I was now confused as to whether I was meant to follow the same line back up. The snow was only just soft enough to dig a little purchase in with my feet and every step forward resulted in sliding half of one back. So wrapping a buff around each hand I started to claw my way up this too. Hand over foot I slowly made progress.

After 900m of climbing and 300 vertical meters from the top I started to hear the whisper of cow bells on the summit. Knowing the climb was nearly done worsened my condition, but slowly, painfully I was getting there, all the while thinking I had competitors hot on my heels. The last 40 meters were back up the same steep snow slope with a rope and thankfully some snow stairs someone had made (legends). Using the rope to help haul myself up I was there. 3rd and final big climb done and all I could say was ‘I’m f***d’ as a response to everyone’s encouragement.

Now for the descent and a slow gradual climb towards the finish. It wasn’t time to relax, energy started to flow back as I took my first few steps downwards and concentration took over brute force. The path was rocky and technical but also twisting. The thick fog made it hard to see the flags and I had to once backtrack 10meters up to find the correct route. Kicking myself, I still thought I was being hunted by my competition.

This technical path soon gave way to a sweeping trail following a small river and down into the woods and the last aid station. Now just 6km of undulating but climbing track remained and I started to play with the idea I had done it.

I managed to keep a run going the entire way and soon found myself going past groups of people cheering and ringing cowbells. I was getting closer but every time the trail dipped I thought it was for the final time to the finish, only to find another rise around the corner. I still had no idea how far back my competitors where but couldn’t bring myself to gun it, so keeping a safe pace where I knew I would have some gas in the legs for a sprint finish I finally crested the last rise and dropped round to the finish. Giving my now wife a hug I then crossed the finish line and had done what I would always have thought to be impossible…I had won a skyrace. 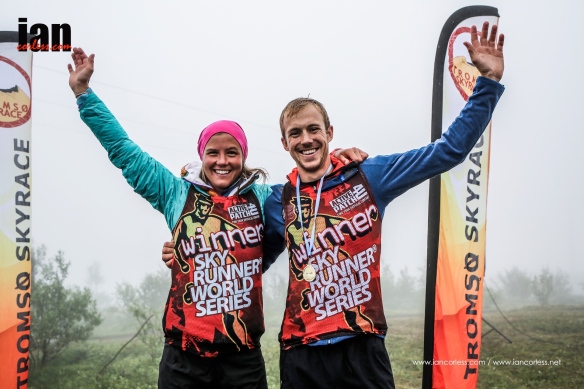 This post is published with permission from ©jonathanalbon
Read a race summary here
View race images here
Jonathan Albon is an athlete first known for his success within the up and coming UK obstacle course racing (OCR) scene. He has now taken his exploits global, adding the title of OCR World Champion and Spartan World Champion to his name. Jonathan has enjoyed a busy 2014 where he has proved unbeaten in OCR as well as winning races such as Man v Horse, The Welsh 1000m Peaks Race and TelemarksHelten. He also achieved a remarkable 14th place finish in the Limone Extreme Skyrace and now victory at Tromso SkyRace.
website HERE