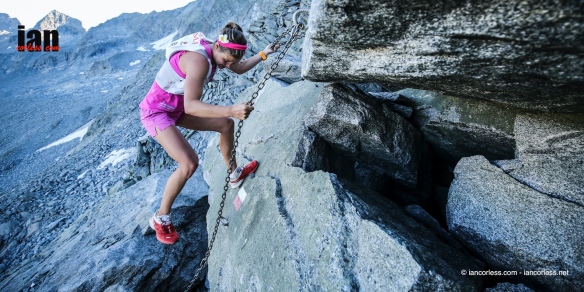 You cannot look at Trofeo Kima with the eyes of a pure runner; It’s beyond running! For over twenty years, ‘Kima’ as it is affectionately known, has blown the minds and the legs of all those lucky enough to toe the line.

The race is arguably the pinnacle of the Skyrunning calendar and as such it has gained a reputation as one of the most demanding and challenging races in the world. At 52km in length the distance is not intimidating, however, 8,400m of ascent and descent put the race in perspective.

Passing over seven passes of the Sentiero Roma, a well-known GR route, the race in its current form is the brainchild of the International Skyrunning Federation president, Marino Giacometti. So tough is Kima that it has a capped field of just 250 participants and the race is held every other year to add to its allure.  This is a race that one aspires too; you need to earn a place on the entry line. The challenge comes no greater. This is confirmed in the words of the previous course record holder, Kilian Jornet:

‘Picture a mountain terrain that has no paths, amidst glaciers; it is all crests, rocks, stretches of via Ferrata and all over a course that stretches 52-km. Kima is not athletics, it is mountaineering; pure Skyrunning!’

Kima takes place on mountain paths that are unmarked. Simple flickers of colour show the way through rock, granite, snow and ice. Sections of the course are so severe that fixed ropes and chains provide the only secure way to traverse vertical walls of rock or exposed ledges. Needless to say, a head for heights, an ability to look after oneself and excellent fitness make each runner’s journey on the Sentiero Roma one that they will never forget. Scaling incredible terrain on foot and at times by hand, participants will reach a high point of 2,950m at Cameraccio Pass. It is the challenging terrain that truly sets the race apart, as Giacometti describes: ‘Kima crosses the group of technical mountains in the area and passes through all of the seven refuges situated on the route. It’s a very technical race and ultimately it has become a beacon of Skyrunning’

‘Kima’ was the nickname of Pierangelo Marchetti, who with friends founded the first helicopter equipe in Italy. The mountains were Perangelo’s life; he loved them and he embraced them. Unfortunately, on July 8th 1994, while attending a rescue mission via helicopter, Pierangelo’s life was taken. Trofeo Kima was created in his memory to ensure his love and dreams of the mountains would live on.

During the 20-year history, Kima has seen the best in the world perform over this challenging course. Now part of the Skyrunner® Extreme Series, Kima is one of three ‘extreme’ races that provides points for an overall Sky Extreme Series title where two out of three races must be completed. The first race in the series was Tromso SkyRace, the second Trofeo Kima and the third being the Salomon Glen Coe Skyline in Scotland.

For many, this iconic Skyrunning and mountain running race is still unknown. It’s like a precious jewel, hidden away for fear of someone stealing it. With each edition, one link in the securing chain is removed and the extreme beauty of Kima is being revealed to an audience of adrenaline junkies. Kima is not for everyone, but if you have the experience and the courage, the Sentiero Roma rewards each who ventures on to its tough and technical terrain.

This year, Tom Owens was riding high after a string of successful results and many had tipped him as the pre-race favourite. However, a day of intense heat and clear skies most definitely played with the rule book throwing several curve balls.

In the ladies’ race, the 2016 Kima will no doubt be remembered as the return to top level racing for Emelie Forsberg. Recent surgery on her knee after an ‘acl’ injury had deprived Emelie (and us) of her presence in a race. A couple of forays into shorter races had tested her fitness and recovery but could Emelie stand 7+ hours on ‘this’ course. 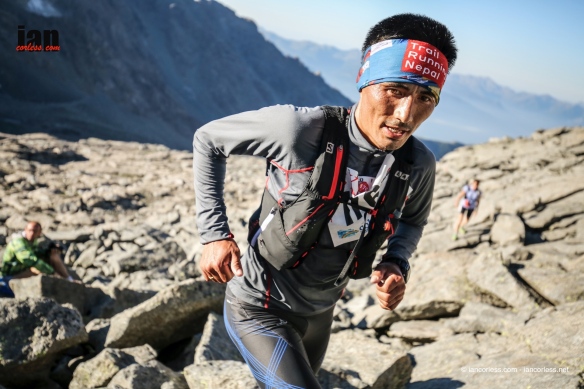 Constantly fighting the terrain and each other, Sevennec and Viret lead the race for much of the way with Gurung moving up into 3rd place after Qualido. In the latter stages of the race though, De Gasperi made a move as Sevennec and Viret faded. Gurung joined the Italian Skyrunning legend and in the closing stages the two dueled to the line… in the closing stages it was Gurung who made the break crossing the line to a stunning victory and new course record time of 6:10:44. De Gasperi crossed the line also under the old course record of Kilian Jornet a spent force. He dropped to the ground exhausted from the effort and heat. Vireo closed 3rd and Sevennec smiled his way across the line in 4th. Tom Owens finished 5th after a tough and hard day in the office – his first at Tromso and 5th here still securing his place at the top of the Sky Extreme Series.

The ladies race was all about come back girl Emelie Forsberg and she didn’t disappoint. Leading the race from beginning to end, Emelie smiled her way to the line, pretty in pink! Yes, this was one of those great comebacks that even Emelie questioned, “I planned to take it easy early on and not push too hard. My operation removed some of my hamstring and this has made my leg weaker so I need to be careful. But everything felt good today and I am so happy, this was not about winning a race, although that is great! It was about coming back with no problems and feeling good.”

Emelie finished in 7:49:06 outside Nuria Picas’s course record time of 7:36:21. Ruth Croft from New Zealand pursued Emelie all day and had a great run often hovering around 10-minutes behind. 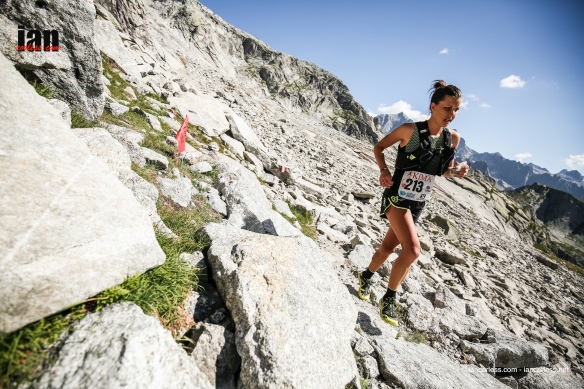 At the line the gap was 17+ minutes and Ruth confirmed that her skills on such technical terrain are not good enough in comparison to Emelie. Kima legend and previous winner of the race, Emanuela Brizio upheld her incredible history with this race crossing the line in 3rd, 8:21:42.

Trofeo Kima is featured in my new book, RUNNING BEYOND (information here)