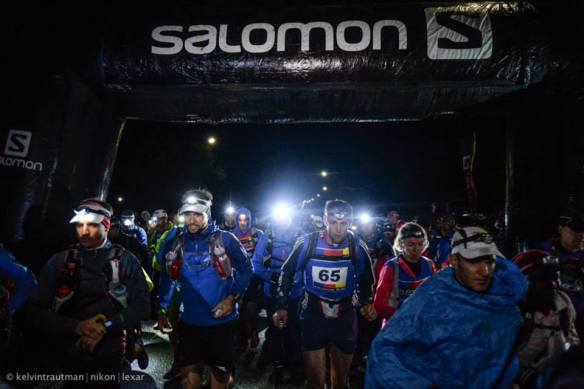 Lady Grey, the start of the 2013 Salomon Skyrun powered by Red Bull, was ravaged by some of the worst weather seen in the 16 year history of this extreme race. Testing from the begining with monsoon conditions greeting the runners at the 4am start on Saturday morning, fierce winds gusting up to 80km/hour were the order of the day as rain and low cloud cover made visibility very poor. The runners were battered by these conditions throughout the day, as the temperatures plummeted and the terrain became very tricky for both athletes and marshals. The very real risk of sever hypothermia and exposure to the brutal elements, left event organisers with no other option but to shorten the race. Always a difficult decision however the safety of runners was top priority. The Salomon Skyrun is an extreme mountain challenge at the best of times but when conditions are as hard as during this year’s race, the need to carry all compulsory equipment as well as a solid event organisation are critical to ensure that all athletes come off the mountain safely. “This year’s race will be spoken about for many years to come by all who were at the Salomon Skyrun 2013 and can only add to the reputation that makes this race one of the toughest ultra-mountain runs in South Africa, if not the world” said Race Director Adrian Saffy.

The Skyrun Lite remained unaffected by the decision and all athletes that reached Balloch completed the race in its entirety. The Skyrun Lite was won by Chris Cronje, with Murray Sanders in 2nd place and Justin Short in 3rd. The Ladies Lite was won by Laura O’ Donoghue, with Taryn Mc Donald in 2nd and Janneke Laesk in 3rd.

Iain Don-Wauchope took 1st position in the shortened Men’s full route, with Hylton Dunn in 2nd and Steven Erasmus in 3rd. The runners will however have to wait another year in order to take a crack at 2012 winner Ryan Sandes’ lightening quick record of 12hrs36min. Salomon sponsored Sandes did not compete in this year’s event as he will be racing in The San Francisco 50 Miler at the beginning of December. In the ladies race, 1st place in the full route went to Annemien Ganzevoort, with 2nd going to Su Don- Wauchope and 3rd to Tatum Prins. 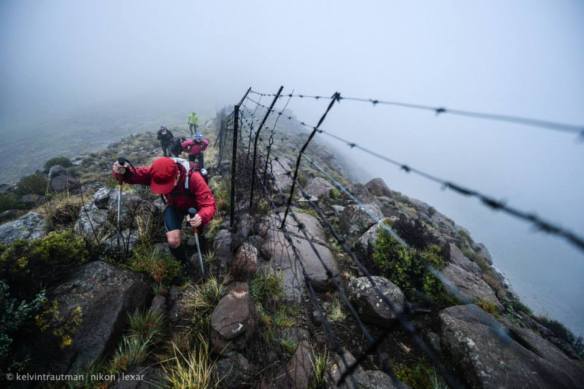 There is no doubt that athletes will look back on this year’s running of the legend that has become the Salomon Skyrun with a mixture of frustration, relief and respect as so well put by AJ Calitz “ I was humbled by the route, weather and our Maker….felt pretty small out there in the mountains. The fact that everyone is safe is testimony to Pure Adventures incredible team. Well done Mike and Adrian, your team and the mountain rescue crews. 2013 is a year I will never forget…all the athletes are truly bound together by this EPIC experience. See you in 2014.”