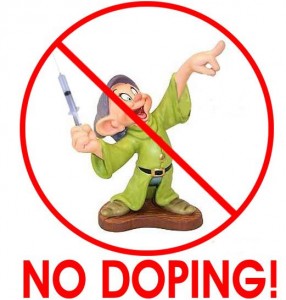 Last week and the week before, EPO, DOPING and the UTMB was the hot topic after Gonzalo Callisto’s positive test. Everyone was talking about it… this week it’s all gone quiet. That can’t happen! You can catch up on my posts below.

I was approached by Outside Magazine and they asked me a few questions. I am pretty sure that what gets used or published will be an edited version and with that in mind here are my thoughts, un-edited.

In light of the latest news from UTMB, what you think this positive test means for the sport?

One has to embrace the positive test as a good thing as it confirms that preventative measures against doping are working. This positive was an ‘in competition’ test which only confirms the need for out of competition testing and blood passports. Of course, the answer is always that testing is too expensive. We have to act now and be proactive. I don’t have the answers but I do feel that we could start to address certain issues that would help. Maybe it’s time that we ask (for example) the top 100 male and top 50 female runners as listed on ITRA to pay for a regular medical? Sage Canaday recently released a full report on his medical status to ‘prove’ he is clean; that’s a good thing! (See below). Athletes of course may well say that they can’t afford it but this is where sponsors come in maybe? We cannot keep making excuses as to why we can’t but find ways to make sure we can! We are at the very early stages of doping in our sport and if we don’t act now it will only become worse and God forbid, we could end up like cycling or athletics.

Do you think doping is really becoming something to worry about, or is this a case of an outlier?

We need to worry, yes! This is not the first positive test, it maybe a high profile conviction, but it would be foolish to think that this is an isolated incident.

Are people starting to talk about doping more in ultarunning than before? Or maybe a better way of asking this is how are the athletes you know, talking about this subject and what it means for the sport?

I certainly have witnessed more discussion about doping and of course this was highlighted at the end of 2015 at San Francisco 50. This was a moment when the sport really looked at itself and many questions were asked. It actually became quite nasty at times and I think a sense of perspective was lost. For example, WMRA (World Mountain Running Association) and Skyrunning have been testing athletes for many years. They have very much paved the way but they acknowledge they can only do so much. In competition testing costs 1000’s of euros or dollars for one event and of course, only urine can be tested. Many say it takes an idiot to to be caught ‘in competition’ but it happens. I go back to blood passports – we really need them for elite, professional and sponsored runners. Some races do not have a ‘PED’ policy and San Francisco highlighted the need for races and RD’s to address this in the rules of the race. Western States for example has re-written its race rules to say that any runner who has had a positive conviction cannot race. Many runners have asked for a lifetime ban for any positive test and they have been vocal about this. I personally am reluctant to go down this route… I do believe that mistakes can happen in drug testing but I am not an expert. This creates a whole new debate and raises questions about the lasting effects of a doping program. For example, we used to have two positive tests and out, I liked that but apparently that has been deemed unfair?

Are people starting to test more for doping than in previous years? What has this looked like?

As mentioned previously, WMRA and Skyrunning have been testing for many years but not at all events. Skyrunning for example had its World Championships in Spain in July, they had three events, VK, SKY and ULTRA and WADA performed tests at all three race distances. The problem comes, once again with cost. At the Skyrunning World Championships, 12 athletes were tested. The make and female winner in each category (making 6) and then 6random tests. Let’s assume testing at an event is $10,000 – who pays? Do we add a surcharge on every runners entry fee? Does that race find a sponsor to cover the cost? Do we rely on a wealthy donor or do we approach all the major brands in the sport and say, you must pay! It’s a complex matter and this is why doping control is a rarity in contrast to the norm. Let’s look at races such as Speedgoat 50k, Run Rabbit Run and San Francisco 50 – these races have some substantial prize money, in some scenarios it could mean a pay check of $10,000+ for a win. Yet nobody has any idea if the winner is clean? Moving away from trail running and looking at ultra road running, Comrades in South Africa has huge prize money and it has a very chequered past with doping: Max King, Ellie Greenwood, Sage Canaday and Michael Wardian (amongst others) have all witnessed the impact of it first hand.

What is your own experience with testing?

I attend races as a photographer and a journalist so in reality, I have little experience of the drug testing process. However, I am a media partner for Skyrunning and I have been present and seen the processes undertaken at several major events where doping control has been in place by WADA. For example, I was at the Skyrunning World Champions on July, 22, 23rd and 24th. I also experienced doping control at Limone Extreme in 2015 and Mont-Blanc 80k in 2014 amongst others.

Do you think the tests, or the conversation about doping in general in ultras is lacking? What could be done better?

Certainly the positive test of Gonzalo Calisto has raised some major flaws in the communication process. I have done extensive research over the last weeks and my conclusions have been quite worrying. I will elaborate:

The above raised so many questions for me:

1. How was it possible that Gonzalo Calisto had tested positive but UTMB did not know?

I asked questions of the UTMB and the IAAF. In both scenarios they were both helpful.

1. To cut a long story short it would appear that when an athlete is tested positive, the testing control, in this scenario AFLD, are not required to inform the race. REALLY? A race has a runner place 5th, the runner is tested, the runner is found guilty, due process is run and then a positive is confirmed and a sanction is put in place without the race being told…. C’mon that HAS to change! Had it not been for the eagle eyes of Robbie Britton and me grabbing the bull by the horns, nobody ‘may’ have known?

2. IAAF explained the ‘due process’ to me and although they were not able to supply specifics, they did say that these things can often take much longer than we would all like and that 6 months is not unusual. Considering Calisto was tested on the last day of August, that potentially could take us to February or March the following year.

3. The IAAF then confirmed that an error had been made! As I pointed out to them, why was Calisto banned till March 2017? The answer: Calisto’s ban and records were amended from a memo dated March 2016 and it was therefore human error. Calisto’s ban dates actually run from March 2016 to March 2018. This coincided with point 2 above and a lengthy due process where one assumes Calisto tried to clear his name.

4. From the March conviction, Calisto’s records then entered the IAAF system and his conviction was uploaded to the ‘sanctioned athletes’ list in June 2016.

5. The IAAF confirmed to me that AFLD did not have to notify UTMB of a conviction but they would look into it?

So, for UTMB to be aware that an athlete had cheated at a previous edition of their race it would appear that the only option open to them is to check daily on the IAAF website for any additions to the sanctioned athlete list.

I could go on…

Why do you think the sport has stayed clean for so long, and what might be changing that would compel people to cheat?

The sport hasn’t been clean for so long. That is a naive viewpoint. Doping has existed in trail running for ages but if you don’t have testing or a blood passport, how would you know that…? I like to use an example and I must be clear here, I don’t doubt the integrity of the runner I use as an example. Karl Meltzer, my co-host for Talk Ultra podcast has won more 100 mile races than anyone. He has even won Run Rabbit Run and he took home $10,000+ He has been running ULTRA’s for 20+ years. You know how many times he has been tested for PED use?  NEVER. Need I say more… This is why our sport has bean ‘clean’ for so long, no testing!

For the most part it seems like the conversation around doping in ultras is relatively new, and also that cheating might be a new thing too. Do you think there’s a chance for race directors, athletes, etc. to get out in front of this and keep the sport clean before it becomes the kind of large-scale issue it is in some other sports?

The Calisto case has raised eyebrows, we need to latch on to that momentum and we need to consider many of my points above but let’s be clear, Calisto is not the first!

On a final note we need to keep this discussion open, we need to keep asking questions and we need to find answers and solutions. It’s too easy to say it’s too expensive, too difficult and so on. We could start by:

We, as runners, journalists, sponsors and so on must be loud and clear that doping is not welcome and we must do all we can to work together. In the Calisto case I have still not seen or heard any public statement from his sponsors, Movistar and Compressport. Compressport did contact me to say that they were ‘looking into it!’ What does that mean…? They also said that Callisto’s sponsorship with Compressport was with a local distributor and not the International division. As far as I am concerned, local or International, Calisto is still representing a brand and that brand gains attention. And also what about the races that Calisto has run and placed in in post August 2015?  The IAAF now confirms the suspension dates back to that time and until March 2018. Not one word, not one public statement from any race that I have seen… do these races condone doping? What about the runners who placed top 5 or top 10 only to loose a place… come on, speak up! 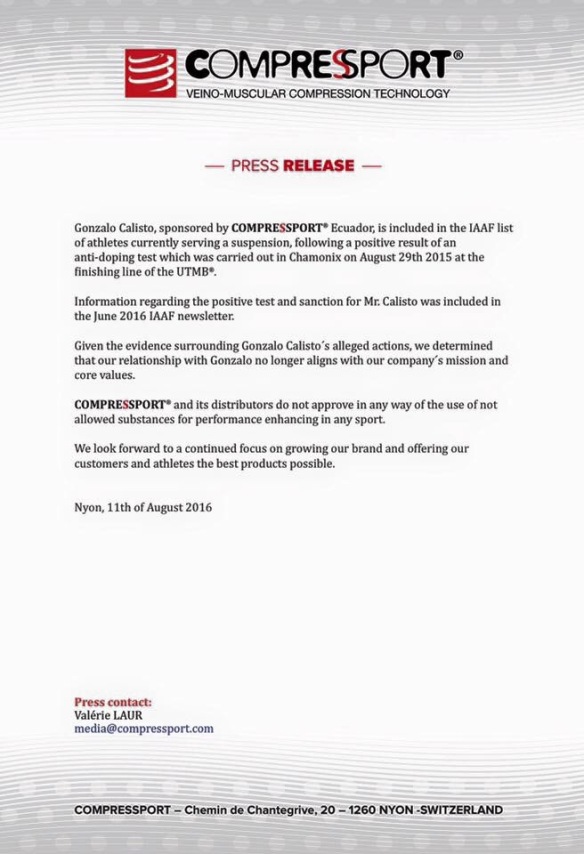 A great place to start is here, Sage Canaday has just recently posted his results online for all to see. Let’s lead by example! 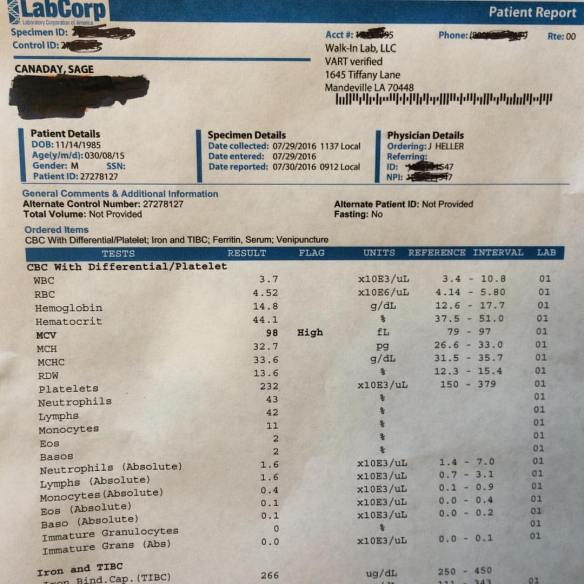 I welcome your thoughts!

15 thoughts on “DRUGS in Mountain, Ultra and Trail #EPO #UTMB”