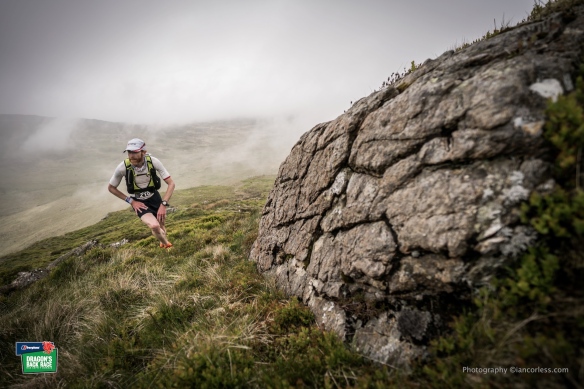 A day of drama in Wales as 2015 champion and 2017 race leader Jim Mann, makes a navigational error and not only loses his strong and convincing lead, but also gives away an additional 30-minutes… needless to say, on the finish line he was less than pleased with his navigational prowess.

The day started at 0600 as much of the field started early to maximise the time available to be back in camp before the 2300 cut-off. Forecast was for clear skies and sun and a tough day.

The first control at Pau Craig had a 2-hour guide and many were finding the early climb to just under 700m a challenge. For the lead ladies, Sabrina Verjee and Carol Morgan arrived together – Caroline McIlroy having started earlier. The men arrived in dribs and drabs – Marcus Scotney getting an early start and then the other main contenders arriving closer together, Neil Talbot  first, then Jez Bragg and then finally Jim Mann who appeared to be flying on the tough/ steep terrain. 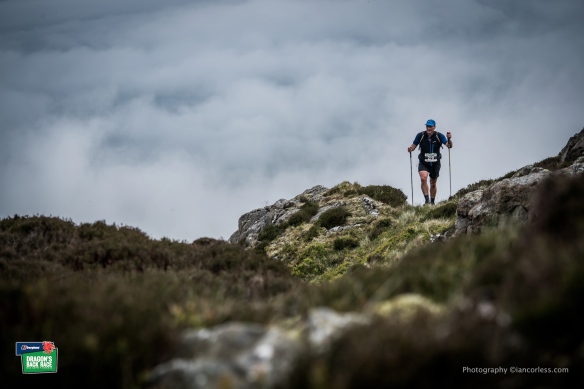 Myndd Moel followed at 683m and a series of false peaks before dropping down to the first road crossing at Llanllwyda. 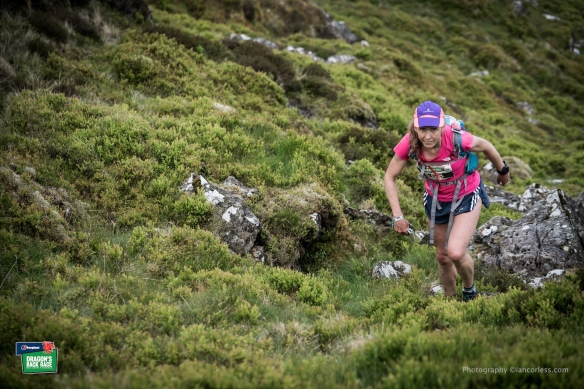 The ladies were running strong holding their respective places with Verjee and Morgan running together. Morgan no doubt looking to open up a gap on McIlroy – the duo were only 30+ seconds apart on general classification.

At Cadair Idris, Mann made his error – he navigated south off the course. Unfortunately he ran for many km’s before navigating back north only to go off course again and lose more time and distance.

Scotney, who loves to run, started to extend his lead and claw back the 90-minutes of Mann’s lead.

It was the end of the day when the damage was really starting to come clear. Scotney arrived at Pumlumon Fawr (the last control) looking strong, relaxed and focussed. He said, ‘I feel good!’ )n hearing the news that Mann had gone off course, he no doubt found some new gusto for the final downhill run to the line on good fast terrain. He crossed the line in 7:54:33.

When Mann finally arrived, he was a long way back and pushing hard. Of course it can be a little confusing as the duo did not start at the same time. Crossing the line in 9:30:43 – the true extent of the damage was finally confirmed, Scotney had taken the overall lead by approx 26-minutes, 24:25:02 to Mann’s 24:51:08 elapsed time.

Sabrina Verjee and Carol Morgan pretty much shadowed each other for most of the day. In the latter stages Verjee looked hot and bothered with her effort in the strong hot sun – she crossed the line in 11:01:05 and retained the overall lead in 30:46 :13 elapsed.