The Matterhorn provides a stunning backdrop for Switzerland’s Matterhorn Ultraks race, a 49km Skyrunning race with 3600m of positive and negative gain. Now in it’s 5th edition, the race once again is in the Migu Run  Skyrunner® World Series.

It is a magical race that provides a circular journey that starts and concludes in the picture postcard mountain town of Zermatt with the towing Matterhorn ever-present to inspire the runners.

The day started with rain and cloud. It was an ominous beginning. But by the time the runners had reached the high-point of the course at thee Gornergrat, the rain was easing, the cloud was clearing and suddenly the sun broke through. What followed was a glorious and hot sunny day.

Whispy white clouds penetrating the blue of the sky, we all knew though that it wasn’t going to last… with 2 hours of running the sky turned grey, the rain arrived and low mist enveloped the mountains; the beautiful Matterhorn was gone! 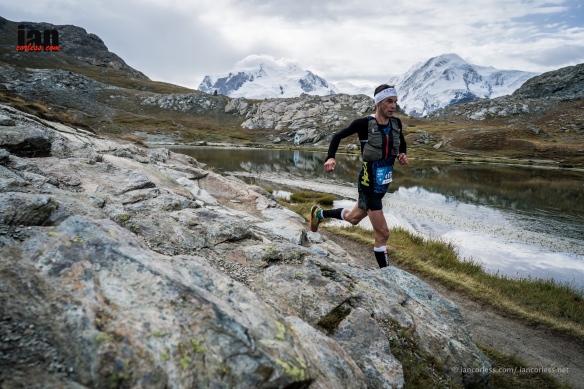 Wild expansive space, high mountains and the 3100m Gornergrat provides the high point of the race and the first indication of how the race would play out. Marco De Gasperi was pushing the pace closely followed by Aritz Egea and Eugeni Gil. 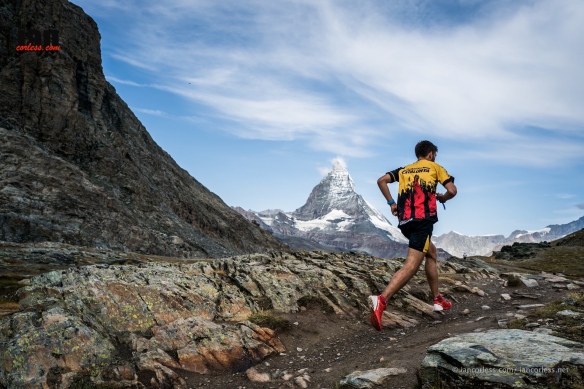 In the ladies’ race, Ragna Debats was already dictating the race and the pace but Sheila Aviles and Laia Andreu were very close and chasing together.

A 1000m drop from the summit is broken by a small climb at Riffelalp and then Furi follows at 24km at 1880m. Two short sharp climbs follow, the first to Schwarzsee at 2583m and approximately 28km covered. Here De Gasperi was leading Gil Ocana, Anthamatten and Egea – it was all too close to call! For the ladies, Debats was still at the front, but like the men, anything could happen.

A drop down to 2200m from Schwarzsee was followed with another 500m+ climb and then what follows is mostly a flat runnable plateau that gently weaves up, down and left to right all the way to Trift. De Gasperi had taken the lead now and was flying, Gil Ocana chased but the Italian was looking too strong – he really wanted this victory, it was clear to see. Anthamatten was now in 3rd and Egea in 4th.

A short kick up of 100 to 200m follows Trift and then a fast and furious drop of almost 1000m over a distance of 6km leads to the finish line in Zermatt and the assembled crowds. De Gasperi sealed victory in a new course record, bettering Kilian Jornet’s time and this 2017 course was 1km longer – an incredible run.

Gil Ocana held on for an excellent 2nd and Anthamatten placed 3rd. Once again Egea ran an excellent 4th place.

We also witnessed the race of a rising star, Petter Engdahl who placed 5th. 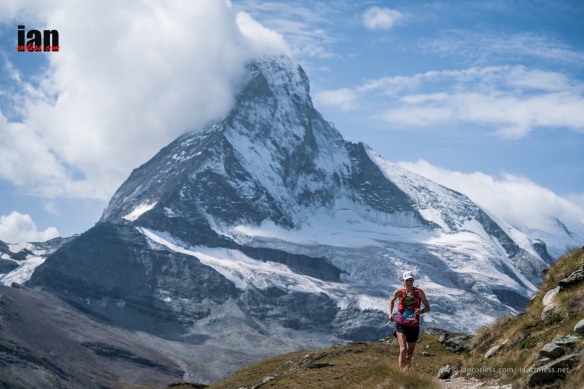 Debats finally managed to open a gap in the latter stages taking a convincing victory ahead of Laia Andreu who had shadowed Debats all the way to Trift.

Skyrunning is not just about the uphill and more often than not, it’s the downhill that determines the winner. Today was all about patience and consistency. Racing is often a mental journey as much physical, De Gasperi and Debats today proved this at the Matterhorn Ultraks.

A full gallery of images are available at iancorless.photoshelter.com