Running a race in Hong Kong is a unique experience! Failure to do your research will no doubt results in a painful and potentially traumatic experience. Heat, humidity and steps – hundreds if not thousands of steps hurt the legs and mind to an overwhelming experience.

No other place in the world (that I know of) has soaring skyscrapers and city life so close to a myriad of trails that weave in and out of the landscape providing endless possibilities. It is why Hong Kong’s is such a popular destination, and let’s face it, trail, mountain and ultra-running is booming here. Each weekend there and multiple opportunities to race.

I was in HK for The 9 Dragons Ultra organized by Race Base Asia – a trio of Steve Carr, Michael Ormiston and Nic Tinworth. After just two editions, word was out that The 9 Dragons was a brutal race – statistics proved it, the DNF rate as high!

Comprised of two races, a 50-mile race and a 50-km race, 9 Dragons is an action packed weekend of trail running. However, the real challenge was the 50/50. Open to just 250 people, the opportunity to run 50-miles one day and then wake up the next and complete 50-km was of course the ultimate test.

The 50-mile race starts as the clock counts down on Friday evening and with the chime of midnight, runners depart for a night and day of running. Of course, the faster you finish, the more rest you get. Cut-off time is 1900 at the Tai Po Tau Playground.

The following morning, the 50-km race starts where the 50-mile race finished at 0730. The finish is at Shing Fung Studios and all runner’s must finish before the cut-off of 2000 hours.

Both races weave in, out, up and down Hong Kong’s network of trails and in the process runner’s must slay the ‘8 Dragons’ climbing 8620m – 5070m for the 50-mile and 3550m for the 50-km. The respective male and female winners (combined time) become the 9th Dragon!

The 8 Dragons are Kowloon Peak, Tung Shan, Tate’s Cairn, Temple Hill, Unicorn Ridge, Lion Rock, Beacon Hill and Crow’s Nest. The 9th Dragon was a title given to the Emperor himself and herein the story of The 9 Dragon Ultra was created. 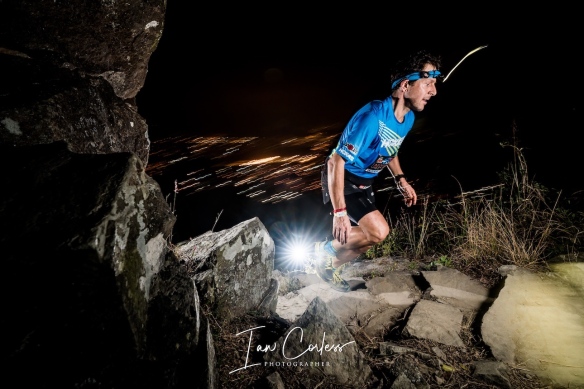 Darkness provides its own challenge and as runner’s departed on the stroke of midnight, it was clear that the challenge ahead had not be missed by every runner – there was no shortage of anxious looks. Temperatures were a little chilly and a strong wind swirled. One unique element of the 9 Dragon’s is the race within a race. The 50-mile would have a 50-mile winner, but at the same time, it would have a 50/50 winner. Pre-race discussion and been all about Hong Kong trail running legend and 2018 9 Dragon, John Ellis. However, just a couple of weekend’s ago he had run at HK100 and then the following weekend he had competed in the ‘King of the Hill’ series. It is here that he picked up a calf injury – would a week of rehab get him fit for the start? Well, the answer was yes! He is a master of pacing and from the off he settled into his own rhythm and he allowed the rabbits to run off into the night. Julien Chorier from France and Kazufumi Ose from Japan dictated the 50/50 pace and Justin Robert Andrews took the reigns in the 50-mile race.

Eventually, Chorier opened a gap and started to pull away from Ose. Ose has experience of the 9 Dragon’s course and he commented after the race that Chorier managed to run when others have walked. Ose managed to yo-yo to Chorier but it was in the final 20-km that the Frenchman opened a 9-minute gap on the Japanese runner. John Ellis despite his injury relentlessly battled the terrain with his usual 100% commitment rounding out the podium. Their times, 10:47:51, 10:56:15 and 11:21:15. Remarkably, the top three 50/50 runners all ran faster than the standalone champion, Justin Robert Andrews who concluded his journey in 11:46:56 ahead of KurtErik Evans in 12:22:42.

For the women, Magdalena Boulet dictated the race from the front and although her lead was slender at times, by the time she reached the finish in 13:45:51 her margin of victory was convincing over race revelation JCY Ho who finished in 14:17:52. Boulet, who is a remarkable ultra-runner, was way out of her comfort zone on the HK trails. She notably said post-race that the trails were the hardest she has ever run and of course, the stairs would haunt her for weeks and months to come. “It has been stair 101 for me,” she said with a laugh. Christine Woon Chze Loh was the 3rd woman.

Morning came all too quickly and as light rain dampened the 0730 start, heat and humidity soon became the order of the day. Unsurprisingly, the 50/50 runners eased into the day allowing the 50-km runners to speed off at a breakneck pace. In particular, Guomin Deng looked set to blaze a trail all the way to the line. He had company early on but from cp1 he opened up a gap and never looked back. At each checkpoint he was ahead of the old course record and at the finish, he smashed it by an amazing 40-minutes ahead of Yuta Sudafed and Blake Turner. Deng’s time a remarkable 6:09:21.

In the 50/50 race, Julien Chorier looked to be running a smart and sensible race early on and coming from a cycling background, he no doubt used the tactic of marking the 2nd placed runner Kazufumi Ose knowing that his 9-minute margin, if held, would provide him overall 50/50 victory. However, unlike day-one, the heat and humidity was relentless. It soon became apparent that Ose was handling the conditions better and with just over 20-km to go to the finish he had managed to break away and take 3-minutes from Chorier’s lead – could Ose break the Frenchman? Chorier pushed, but the more he pushed, the hotter he became… The intense humidity and countless steps conspired against him and at the finish, Ose managed to claw back the lost 9-minutes from day-one and win by 3-minutes. It was an epic battle and one that will go down in the history of the race. John Ellis despite incredible pain, somehow, managed to hold on for 3rd place in the 50/50 in 19:27:15 combined time. As he ran the final meters, he was doubled in pain and at the finish he collapsed, racked with pain. His result only confirmed his legendary status to the HK trail community. Ose’s combined time was 17:34:28 to Chorier’s 17:38:19.

The women’s race had a similar feel to the men’s with the solo 50-km runners setting of at a relentless pace; a pace they would hold to the finish. Whereas the 50/50 runners would ease into the day and take on the challenge, one stride at a time. Charlotte Taquet was a convincing winner in 7:07:11 ahead of Sandi Menchi and Kim Mathews.

Magdalena Boulet had recovered remarkably from her day-one efforts, no doubt all her multi-day experience coming to the fore. She looked fresh and strong all day and although the local HK trail community hoped that JCY Ho would use her local knowledge to reel Boulet in, the Hoka One One runner was just two strong. Boulet crossed the line first once again in the 50/50 runners and became the 9 Dragon for 2019. Ho finished 2nd in a flood of tears and emotion. It was a huge day and weekend of running for this women who only started running a few year’s back. Christine Woon Chze Loh once agin placed third and secured the final 50/50 podium slot. Combined times for the women were 22:18:04 for Boulet and 24:24:41 and 25:32:23 respectively for 2nd and 3rd. 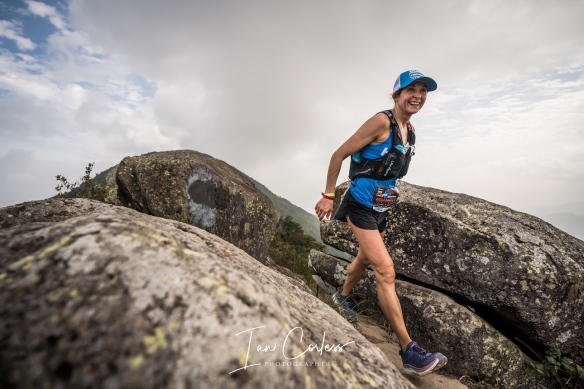 I see many races and I have to say, The 9 Dragon Ultra race and team excelled from beginning to end. The HK trail running scene is like a huge family. It is more than running, it’s like a huge social experiment that brings people from all walks of life together, for one common goal. The Race Base Asia team headed by Steve, Michael and Nic really know how to put on a race and make it go like clockwork. There are so many things to praise, from the detailed documents that explain how a checkpoint should look, to the incredible burger (veggie option available) and beer that is offered at the finish-line. I only wish that all races could be like this.

Many thanks to Steve, Michael and Nic for making my stay slick, enjoyable and fun. We had some great times in our week long adventure. Hannes was my man with a motorbike for the 50-mile and he did a stunning job of getting me around in the dark. Janine and Mo hosted me for the week and well, it was just a pleasure – I cannot wait to return, And finally, thank you to everyone who came and said hello. You made my HK adventure a pleasant one and I am keen to return. 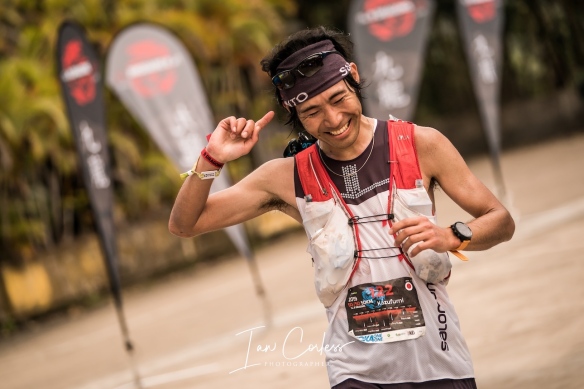 Images are available at www.iancorless.photoshelter.com