The words are still ringing true in my ears, ‘the tenth edition of The Coastal Challenge is going to be special, very special indeed’.

Just two months ago we announced that Philipp Reiter and Julia Bottger (both Salomon) would join Jo Meek (2nd lady at the 2013 Marathon des Sables) and 2013 ladies TCC winner, Gemma Slaughter in the line up of the 2014 TCC. Today we go one step further…

Anna Frost (Salomon), Michael Wardian (The North Face) and Nick Clark (Pearl Izumi) have confirmed participation in the 2014 edition of the race making it one of the most competitive multi day races on the calendar for 2014. Rodrigo Carazo, race director for the TCC confirmed that it is a ‘dream come true’ to have such a quality field at the race.

‘I have raced in Costa Rica before doing The North Face Endurance Challenge Costa Rica in 2013 and I was lucky enough to have won it and I love racing in heat and humidity, makes me feel like home as Washington, DC gets sweltering in the summer months.  I just try and stay small and move fast…’ Mike Wardian

The warmth of Costa Rica, blue skies, varied terrain; it’s a wonderful way to start a new year. The multi day format of the TCC allows all involved an incredible challenge.

Frosty (Anna Frost) when I spoke to her was really excited at the challenges that would lie ahead. ‘Costa Rica is exotic to me. A place I have never been but it intrigues me with images of its beautiful coast lines, native bush that seems a little bit like home (NZ) to me and the bright clear blue sea that is so luring. So when I heard there was a stage race that covers this coastline I wanted to know more.’

Frosty has raced over multiple days before, in early 2013 she participated in Chile and as we chat, she is currently in Nepal at the Manasulu Trail. One of the best female runners out there she is also a threat to many of the men she races as she proved with her stunning victory at the 2012 Transvulcania La Palma.

‘Stage racing is so fun. You are really going somewhere and you get to see so much along the way. The camps between stages are wonderful for spending time with new and old friends. It is really a challenge to get up each morning with aches and pains and stiffness from the days before but you know the whole team feels like that too so you just get moving and really enjoy the day.’

Michael Wardian is equally no stranger to multiple day racing. He is the highest ever placed American at the Marathon des Sables securing 3rd overall at the 2010 edition. He is also a prolific racer, he has been a 50km champion three times, he has held multiple world records, raced the 135-mile Badwater Ultra Marathon in Death Valley and by contrast ran 2:21 at the US Olympic Trials in Houston, 2012.

‘I definitely enjoy the challenges of multi-day races as there are a lot of factors to account for besides just running and that intrigues me and inspires me. I think of all the things I learned in my previous outings at multi day races; to be as light as possible and balance your energy expenditure throughout the race but also, and this is a little contrarian, but to push more than you think possible because it is possible to recover quicker than you think. I also, take care of the small things because over a week of racing they can make all the difference.’

The Coastal Challenge is not self sufficient, it’s about covering distances in an efficient manner and as fast as possible but at the end of the day, your food is prepared and you can sleep and relax in your own tent, does that mean we can expect some fast running?

‘I actually have only done one multi-day without having to carry a kit, the Himalayan 100 Mile Stage race in India and without the responsibility to carry all you gear for the week, I expect the pace to be wicked fast and I am looking forward to pushing it.’

Michael will not have his own way at TCC, for sure Philipp Reiter will also be keen to push the pace but 2013 Grand Slam participant, Nick Clark will be joining the party in Costa Rica and if anyone knows how to run hard over multiple days, it’s him! In 2013, ‘Clarky’ raced Ian Sharman over four 100-mile races in 12-weeks. It was an incredible battle and one that made everyone in the ultra world turn around with open mouths. Not only did Sharman and Clarky beat the previous best accumulative time but they both each had victories and in the end it came down to the wire for the overall title. A title, which Sharman just won.

I asked Clarky about Costa Rica and how he will adapt for the heat and humidity for the 10th edition of the TCC?

‘I actually haven’t been to Costa Rica before. Last year I raced in Nicaragua at the Fuego y Agua 100k. Nonetheless, I’m sure conditions will be much the same. Coming from mid-winter in Colorado, the transition to 95+ degree heat and high humidity in Central America is very tough, but I felt like I handled it decently last year. January and February have always been base-building months for me as I prepare for goal races in the summer, so I definitely won’t be sharp, but any time I toe a start line I have my race face on. That will be the case in Costa Rica for sure, especially as it looks like there will be good competition to race against.’

You have a reputation for being one of the best 100-mile runners out there, but what about multi day racing, is that something you have done before?

‘I’ve never done a multi stage race before, so I’m excited to work through some new race dynamics and strategies. I have also never been to Costa Rica, so I’m really looking forward to the vacation aspect too, especially as I’m planning on bringing out the whole family.’ 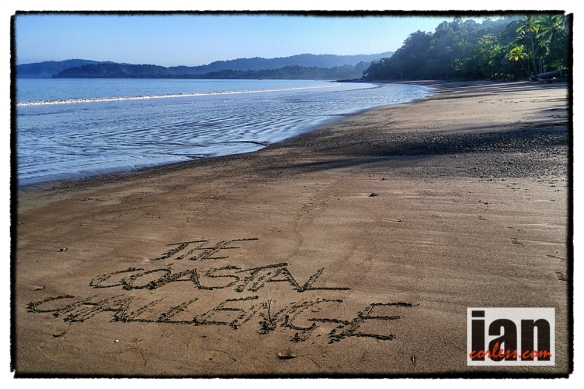 That is a great aspect of the TCC race. It’s possible to bring families and the team are able to provide logistics and entertainment outside of the racing. It’s a fantastic selling point. As a runner you can fulfill your passions and desires but not at the expense of family time.

On a final note, I asked Clarky and Frosty what plans lie ahead for 2014. TCC is in February, so, a full year awaits!

‘Firstly, fingers crossed my body is healthy! And then I have so many things I want to achieve. I really want to race Hardrock 100 so I need to qualify with a 100-miler. I haven’t decided which one yet but maybe Wasatch. The new Buffalo Stampede Sky Run, Transvulcania, Mt Blanc 80km are all on my list, it’s very exciting!’

Frosty has a passion to run but her running is so much more. It’s about experiences, making friends and spending quality time, something that she is convinced she will find in Costa Rica.

Clarky loves to race and race hard, having consistently been close to winning at the iconic Western States, I wondered if that would become a primary target for 2014, after alI, he wouldn’t have three 100’s to follow it?

‘I plan on running Western States again in June, Hardrock 100 if I get in through the lottery, and then the Steamboat 100 in the fall. Other than that, I’ll be looking to take on a couple of FKT (Fastest Known Times) adventure routes in the mountains.’

Steve Diederich, the UK agent for The Coastal Challenge has made several places available to coincide with this announcement. In addition, a 5% discount will be offered to the first five applicants.

Steve had this to say, ‘The TCC in 2014 is a vintage race in the making. Joining an exclusive club of iconic multi-day ultras, the excitement of what the 10th edition has in store really is something that we all can’t wait to see unfold’

If you would like to attend the 2014 event and take advantage of a 5% discount, please use the contact box below.

IMAGES FROM THE 2013 EDITION ARE AVAILABLE HERE

2 thoughts on “Anna Frost, Nick Clark & Michael Wardian join the line up for the 2014, The Coastal Challenge, Costa Rica”