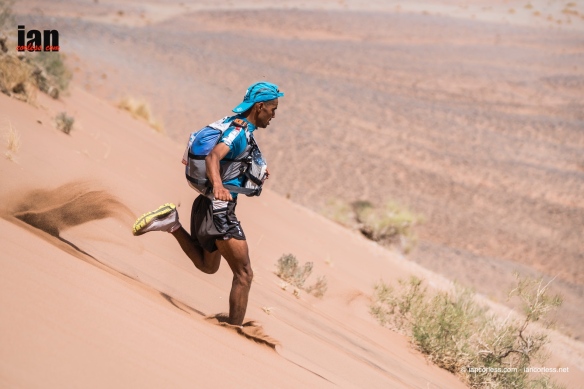 The mood in bivouac on the second morning of the 32nd edition of the Marathon des Sables was one of mixed emotions. Satisfaction on completing day one, a good nights sleep and then the daunting contrast of a ‘tough’ day two and 39km with some significant technical and sandy terrain.

An 0830 start would allow runners a little more time to complete the stage – the cut-off was 11h 30min.

Heading south the early km’s were full of sand, dunes and climbing – Bou Laadam Jebel a significant marker at 5km. A plateau and then a steady sandy climb at 8.5km would lead to Cp1 at 12.8km. The next 12km would follow a southerly direction of sand, hills and dunes. Cp2 would offer some recovery before the push to Cp3. Dunes would sap the runners energy here and then a tough climb would lead to the highest point of the day via a gulley of rock. Elotfal jebel offered stunning views and then a steep sandy descent before the final Cp3 and a flat run to bivouac.

Day 2 was all about Rachid El Morabity and Elisabet Barnes. The duo dominated the day from the front and have well and truly laid a foundation for potential victory in the 32nd edition of the Marathon des Sables. Of course, there is still a long way to go…

El Morabity ran within himself till Cp1 but then opened up a gap leaving the rest to follow. The men’s field was spread throughout the sand, dunes and plateaus of Morocco – El Morabity was having none of the group running of day 1.

Abdelkader El Mouaziz, Mohamed El Morabity and Thomas Evans followed but they were not match for the MDS master. At the line, the gaps were significant. El Morabity crossed in 3:04:52 and then it was 3:12:15, 3:14:31 and 3:14:35 for El Mouaziz, El Morabity (younger brother) and Evans. Aziz Ek Akad placed 5th and Andy Symonds 6th. 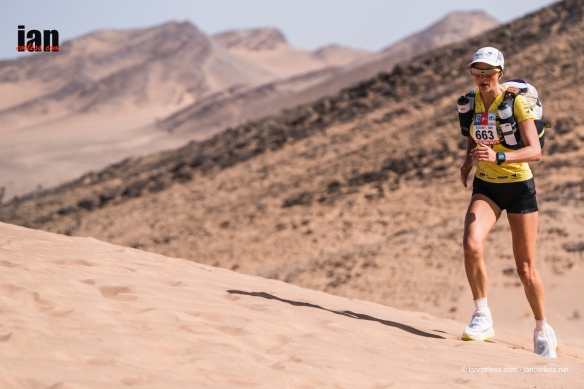 In the ladies race, Elisabet Barnes is showing the form that gained her victory in 2015. She looks relaxed, happy and focussed. Last year’s second place Nathalie Mauclair commented on how strong she was running. Barnes lead from the front and never looked back, just as day 1, a way she like to run. She crossed the line in 3:49:04.

Following behind there was a change with Fernanda Maciel returning to form and pipping Mauclair to 2nd, the times 4:00:42 and 4:04:14 respectively. Emilie Lecomte placed 4th, Aziza Jaji 5th and rising star Jennifer Hill 6th.