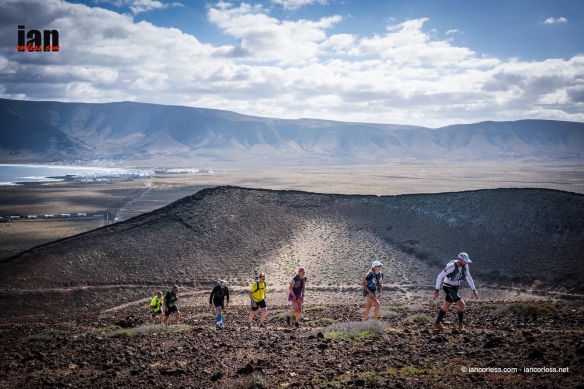 Clear skies. Yes, at 0800 the sky was clear and we all knew that it was going to be a great day!

Friday, was the first full day of the 2017 Multi-Day Training Camp and what a way to start! Participants were split into three groups and they would cover somewhere in the region of 32 – 38km. Elisabet Barnes lead the fast group, Niandi Carmont the medium group and Marie-Paule Pierson looked after the walkers. Ian Corless worked as ‘pick-up’ between the groups looking after runners who found the pace of their respective groups a little to ‘hot’ and needed to drop the the group below.

It was a stunning day. Hugging the coastline, all the groups headed out to Famara and beyond and then circumnavigated back via a different route with the climb of a dormant volcano.

One thing was clear – a warm day, terrain that replicated race scenarios and specific paced groups made for a happy bunch of runners.

Back at Club La Santa, it was time to refuel and hydrate before two talks in the early evening, one on foot care and the other on hydration.

The day ended with some good food and of course, the odd beer or glass of wine, it’s a holiday after all…

Interested in the 2018 Training Camp? If so, go HERE