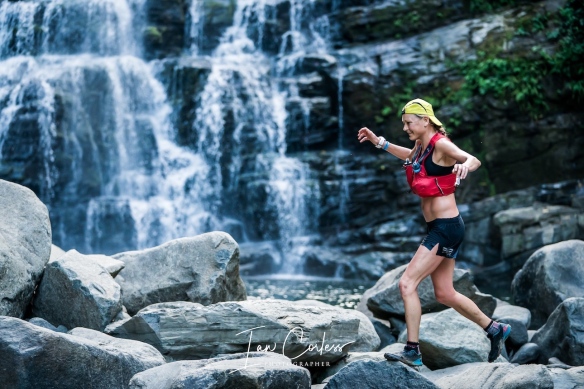 Day 3 of the 2019 kicked off at 0530 this morning and what lay ahead was a tough and challenging day of hills, technical trail, waterfalls, long dusty and stony roads and relentless beach – all intensified by Costa Rican heat and humidity.

The early trails leaving Dominical Beach take the runners into 10km’s of technical river bed. It’s all rock-hopping and slip-sliding away on the wet and greasy surface.

Nuayaca Waterfall is no doubt the highlight of the day, if not the race. The runners arrive down a small trail and the cascade greets them. They pass through and climb up a winding trail. From here on in, the terrain varies from rainforest, dusty access roads and technical trail before the beach arrives. Now the sun is high, the heat intense and it punished the runners mile after mile. A small dense rainforest is a prelude to a final section of road that leads to the finish.

Now, the heat is intense and the runners are sandwich pressed between sand and sky.

Pere Aurell dictated the early pace over the opening technical miles, his skyrunning background a real bonus. He pushed and pushed the pace and he opened up a considerable gap by the time of waterfall. This gap continued throughout the day until the final road section took its toll – reduced to a walk at time, Pere still finished the day first overall and first on general classification.

Jorge Paniagua was a key chaser today pulling away from Marcus Scotney. In the early-stages. Marcus didn’t look good and at the waterfall was a long way back behind the lead men and women. Post-race he complained of a damaged toe. 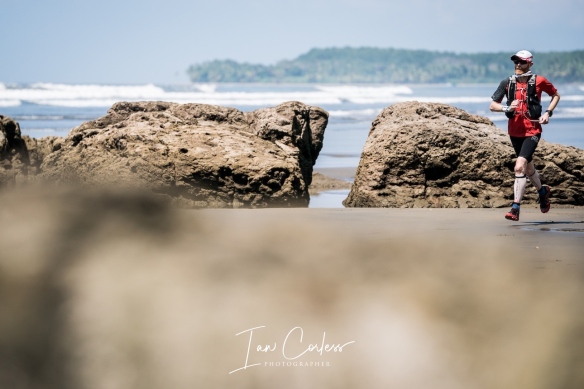 However, as the stage progressed and the trail became more runnable, Marcus clawed back time in in the final 6km he caught Jorge and managed to take 6-minutes from him. It was an incredible closing run.

The story of the day was the women’s race. Early on, Ida Nilsson and Ragna Debats traded blows matching each other, stride-for-stride. Pursued by Holly Page, the top-3 ladies were in for a real battle.

Ida made he move and slowly pursued the front of the race and increasingly opened a gap on Ragna. On the flat beach section, Ida lengthened her stride and does what she does best – run fast! She was now 2nd overall on the stage having caught and passed all the male runners ahead of her, with the exclusion of Pere. At the line, once again, she smashed the 2018 stage course record set by Ragna and earned herself another $250 CR stage bonus. Ida’s run in the 2019 TCC is incredible!

Ragna ran a solid race for 2nd but in the closing miles, Holly put an effort in and closed the margin to just 90-seconds.

With three stages complete, the general classification is interesting with Pere in a strong lead. Marcus is 2nd but notably, Ida is 3rd and just a handful of minutes behind. The fight for overall podium places is going to be an epic one.