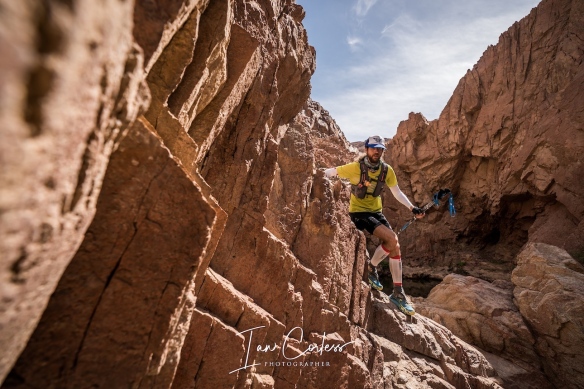 One year of planning finally came to fruition today, when US based ultra-runner, Michael Wardian departed Eilat at 0546 to head north covering a total of 631-mile on the Israel National Trail in a target goal of 10-days.

It’s a huge undertaking and the man who came up with this idea, Zoli Bihari of Canaan Running Adventures knows only too well. He did a similar route over 3-years ago, it took him 23-days.

Michael is a legend in the ultra-running world and his reputation precedes his prolific achievements and his desire to run. Just recently he won the World Marathon Majors, running 7-marathons on 7-Continents. He then added 3 additional marathons so that he could set a world-record for the fastest average time for 10-marathons in 10-days.

Never one to refuse an adventure, Michael and Zoli met at the 2018 The Coastal Challenge in Costa Rica. The duo chatted and the idea for #fktisrael was created.

It is normal for trekkers to travel from the north and finish in the south. However, there are restrictions on the trails (in terms of movement in darkness) in the south, therefore, Zoli and Mike decided to start in the south and then if required, they could run in to the night later in the challenge and gain extra miles and time.

For a couple of days, Mike and the team explored the trails in advance of the FKT. It allowed some adjustment, planning, photo opportunities and also gain some relaxation time before a huge challenge.

Placing his hand on the metal post with the ‘INT’ markers, he looked eager and motivated for the challenge ahead. For several days he had been saying he felt good. He was off…!

The landscape and scenery on day-1 is truly spectacular. I would go as far to say, that it is some of the most impressive I personally have witnessed. Beauty comes at a price though – the trails are technical, have plenty of climbing and descending and then add some intense heat.

Mike was always going to play a, ‘Let’s see?’ Scenario on day-1 and he was keen not to get too carried away, starting at a crazy pace. With 50-miles to cover, it seemed a sensible target.

Throughout the day Mike moved steadily, always looking relaxed and in control. However, it was clear from the outset that Mike’s ‘hopeful’ target time for day-1 would be extended. Not a problem! After all, this attempt is going to last 10-days – one needs to think of the long game!

At each check-point he arrived, smiled, said he felt good and then stocked up on ‘Tailwind,’ drank some Coconut water, snacked on food, re-filled his bottles and off he went. Rarely did he spend longer than 10-minutes at any one stop.

A highlight of the day came at Timna Park. The trails, the landscape and the views here are truly spectacular – for sure, it is a bucket list location. I joined Mike for a second time in the day to climb over the key mountain, run the technical trails and the descend to our feed point at 51km covered.

Mike was moving well, using poles when required and maintaining a good pace. At the feed, he went through a similar scenario as with all the other stations and then moved on. 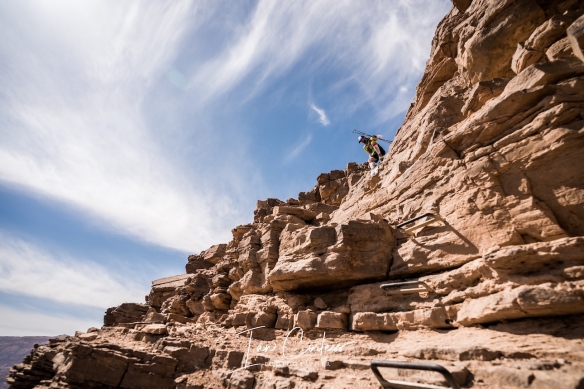 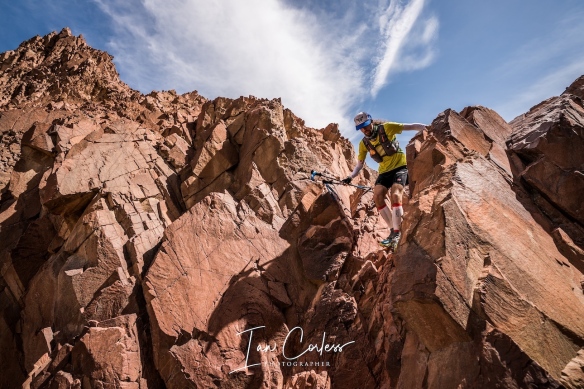 At the final feed point, Beer Matak at 61.5km he was notably looking tired and fatigued from the day’s efforts. He was also feeling the heat from the last big climb of the day. It was time to dig deep and push on for a final 18km.

It was here, as darkness came that disaster struck. Mike followed the marker of the ‘INT’ but unfortunately missed the turn to our bivouac which was off the INT route. He pushed on, following the markers and it was our support runner who notified us that he was ‘missing’ after hearing from another trekker that he passed some 30-minutes early. Our camp no cellular connection, so, we departed following the approximate route that Mike would take, It was here that technology took over. We managed to liaise with Mike via WhatsApp, we shared ‘live locations’ and we were able to navigate to him a long way down the ‘INT’ route. The route that he should have done on day-2!

Mike was surprisingly in good spirits, but he had been out on the trail for almost 13-hours and 20-minutes, it was a tough first day! The only plus side coming that he had eaten in to tomorrow’s mileage.

Back in camp, it was all about recovery. He hydrated, ate some snacks, wiped down and put on fresh clothes. He soon needed a nap. It had been a very long day, both physically and mentally. The priority was good rest, some quality food and then focus the mind for the challenges that day-2 would present.