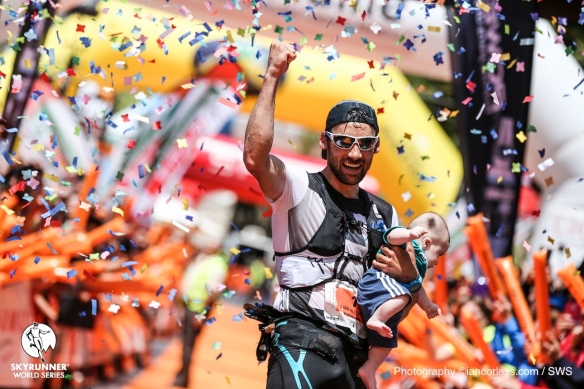 The glowing Fuencalientie Lighthouse once again provided a stunning back drop to the start of the 2016 Transvulcania Ultramarathon, the first Ultra race in the 2016 Skyrunner® World Series. 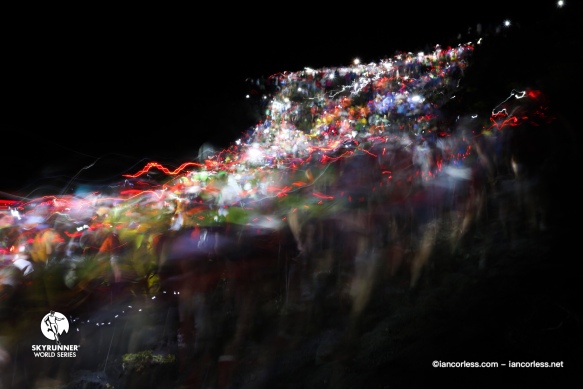 The majestic and beautiful trails of ‘La Isla Bonita’ provided a stunning but hard start of the race as 1000 plus runners navigated the wide start to funnel into single-track with black lava sand underfoot causing no end of traction problems.

It was a fast start, it always is and as the runners forged ahead looking of clear trail, it was the village of Los Canarios were hundreds of villagers assembled before a clear glimpse of who the main protagonists where? 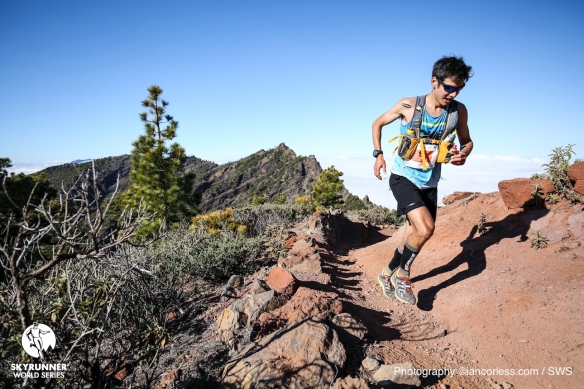 Sage Canaday as per usual, looked to gain an early lead  and buffer lead over Luis Alberto Hernando – his main rival for the top slot on the podium. A pattern was forming but it was still early days in such a long race and the heat and sun had yet to make an appearance. In the ladies race Ida Nilsson started to lay the ground work for what would result in a dominating performance.

Running out of Los Canarios, the trails are runnable and fast, weaving in and out of lush green vegetation, space finally opens up and the soft black sand returns making progress hard. At times it can be a little like running on the spot, one step forward and two steps back. 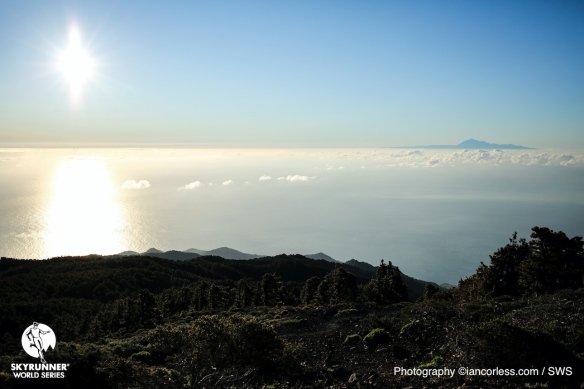 The Route of the Volcanoes were bathed in early morning sun and suddenly the island came to life with the distant islands on Tenerife and La Gomera breaking through the low cloud.

Sage Canaday continued to forge ahead at the from of the race, the pace was high but it was clear that this was not going to be an easy day on the trails. Chasing behind Luis Alberto Hernando, Nico Martin, Andy Symonds, Ricky Lightfoot and others battled the terrain and in and amongst the lead men, Ida Nilsson was making her presence felt leading the ladies race.

Reaching the top of the volcano section, finally some fast running to El Pilar, a key stage of the course with almost one third of the race covered. It’s the first major feed station and a place full of activity as thousands of fans assemble to cheer on the runners. It also provides a very clear opportunity to see each and every runner. Sage was looking good, as was Nico Martin but Luis Alberto was just biding his time. Ida Nilsson was almost in her own race but Ruth Croft and Ann Lise Rousset. Pre race favourites Anna Frost and Mira Rai were back in 6th and 7th and roughly stayed in these places for the whole race.

Leaving El Pilar a section of good running allows the pure runners to open their stride and make time on their rivals. It doesn’t last long though, it’s soon back to hands-on-knees euro grunt as arguably the runners enter the most stunning sections of the whole house that leads to Reventon and beyond. 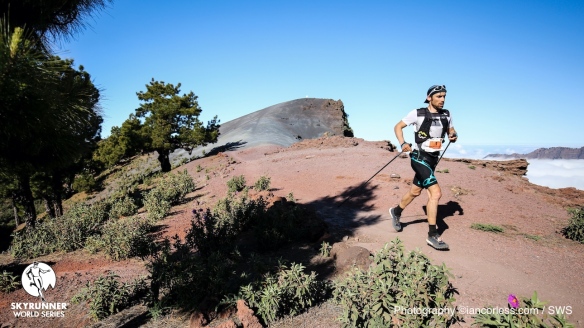 Pine needles cover the floor provide a lush carpet in-between the sharp and aggressive rocks. The sun breaks through the tress providing a stunning array of orange light that looks like golden fingers. The trails now weave left and right, up and down and to the left, Tazacorte can be seen off into the distance nestled next to the sea. the views are incredible. 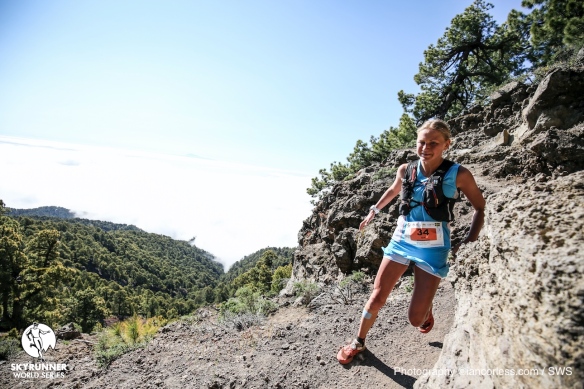 Sage Canaday continued to push ahead but Luis Alberto was also looking good and had the American in sight -it was just a matter of time! It was all to play for but the harder sections and technical running around the Caldera were looming. One plus side as the runners enter the Caldera is that the bulk of the climbing is now done, what followed was a series of rollercoaster ups and downs of at times technical rock.

Ida Nilsson had used her speed to good use to open up a huge gap, Ann Lise Rousset was chasing as was Ruth Croft but barring an accident or a lack of energy, Nilsson looked set for victory!

As the observatories approached it was clear to see that we had a race on our hands, Sage Canaday was holding his own against Luis Alberto and Nico Martin was not far behind. In the ladies race, Ida Nilsson looked just too strong – victory was on the cards!

Dropping 2400+m in 18km requires legs and nerves of steel. Believe me, it’s one hell of a ride. The early sections are open and the heat hits hard. Tree cover finally arrives and underfoot the single-track changes from dusty sand perpetuated with rocks to sand trail covered with a blanket of pine needles. The pine needles are difficult as it’s just like running on slippery grass.

Once again the trails opened up and then sections of technical rock slow the runners progress before they reach the road and the cafe at El Time. Luis Alberto had extended his lead and as he ran down the steep tarmac roads that lead to the zig-zag technical trails that lead to Tazacorte port, the writing was already on the wall for victory.

Nico Martin had moved into 2nd and was pushing hard to gain an advantage over Sage but it would require an all out effort and some serious risk taking from sage to pull back any time. The only possible scenario to pull back and gain time would come at Tazacorte and the tough and relentless climb to the finish on Los Llanos.

In the ladies race, Ida held on well and although anything could happen in the final 10km it was looking good for victory.

The heat and crowds welcomed the runners in Tazacorte and just when they thought the race was all over, a run along the beach front and a technical run up a gully were only just appetisers before the final climb to the finish line. 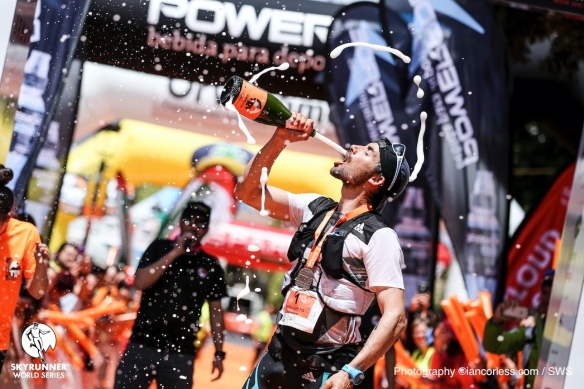 The crowds had been assembled hours, the music had been blurting away and ‘Depa’ the mc for the race and been whipping the crowds into a frenzy. Suddenly the large screens showed Luis Alberto entering the final street sections, head down and pushing hard. In the finish are his wife waited with his new born baby! 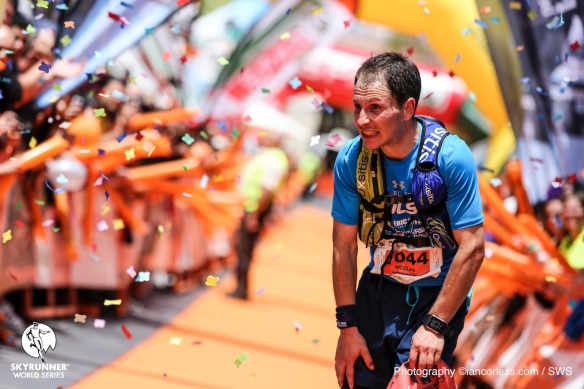 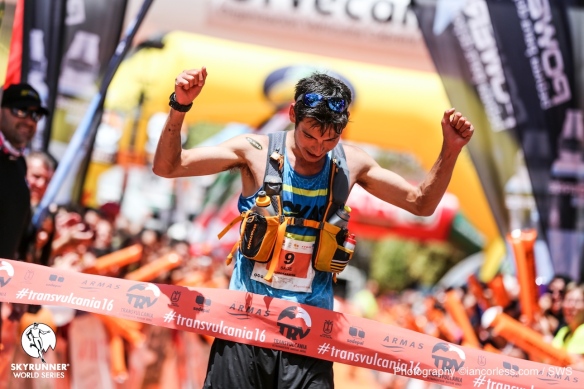 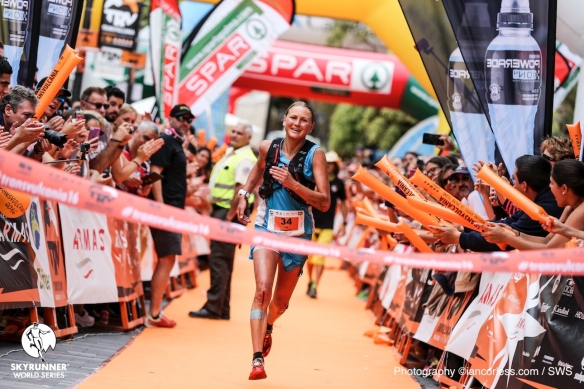 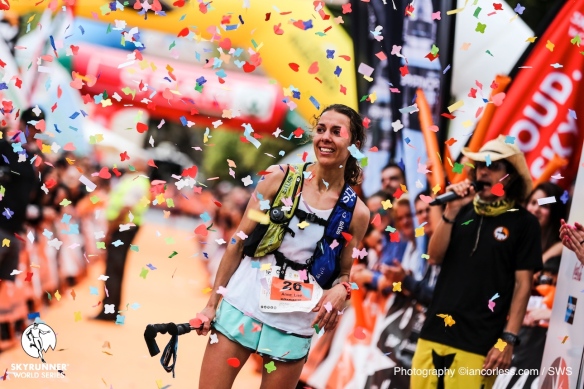 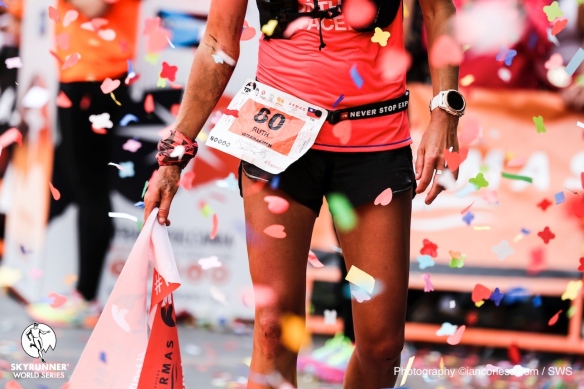 Transvulcania Ultramarathon never disappoints and I’ve said it before and I will say it again, it is arguably one of the greatest courses and finish lines out there. Add to that stunning organisation, wonderful support and a passionate island who gets behind the race, there is no mistaking why Transvulcania has become THE must race to do.

The 2016 Skyrunner® World Series is brought to you with a new management company, Geneva based SkyMan SA

SkyMan SA  is pleased to present a new Main Partner, Migu Xempower, a Chinese exercise and health management platform which also counts a rich experience in organising marathons, city and mountain races for millions of runners.

The well-established, Sky, Ultra and Vertical format is joined by the Extreme Series presented by Alpina Watches, which more than ever expresses the true spirit of skyrunning defined not only by distance, but vertical climb and technical difficulty.