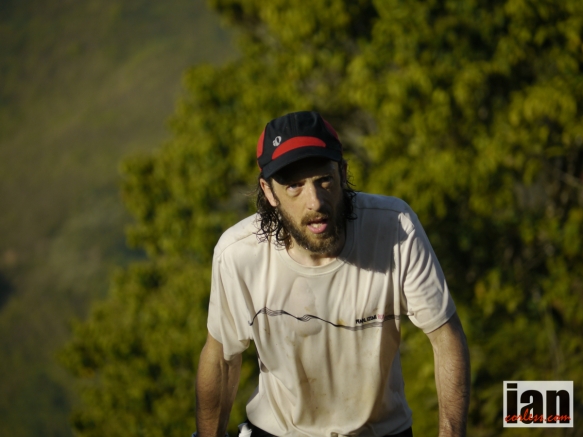 Nick Clark is one of the most respected 100-mile runners in the world. He is known for being tough and getting the job done! Born in the UK he moved to the US way back and started notching up a list of stunning ultra results that dates back to 2006.

For many though, Nick elevated his profile in 2013 when he went head-to-head with Ian Sharman in the Grand Slam of ultra running. In an epic battle, the two US based Brits traded blows in one of the most exciting moments in our sport. Sharman came out on top but only just… Clark has often joked that after he won the last race, Wasatch he was the Grand Slam record holder in 2013 until Sharman finished. It takes some doing just completing four 100-mile races but to place 6th at Western States, 3rd at Vermont, 2nd at Leadville and then win Wasatch blows my mind!

Clark started 2014 with The Coastal Challenge in Costa Rica, his first multi-day race… he went on to say it was one of the toughest races he has done. At UTMF he placed 10th and recently he placed 5th at Run Rabbit Run. The only blip this year came at Western States when he toughed out a 47th place… a real bad day at the office!

And now the Salomon SkyRun in South Africa looms. I caught up with Nick to find out about his expectation are for what will be a tough day out in the Drakensberg mountains.

How have the last couple of months been from a racing perspective?

Up and down, I guess. I had a terrible run at Western States this year – I think I was burned out on the race – then came back and had a much better run at the Run Rabbit Run 100 in September, filling me with a good level of confidence for the SkyRun.

How’s training going; have you been training specifically for South Africa?

As noted above, I’m just looking to get into the mountains and to get into remote, steep terrain with some navigational elements thrown in. Off trail and steep is the mantra.

Maybe you have been brushing up on your navigation and looking at some maps?

I’m forever looking at maps dreaming up fun routes in the mountains. It is for this reason that I’m so excited about Sky Run.

Are you intimidated by the navigation element of the SkyRun?

Absolutely not. It adds a unique and seriously fun, in my opinion, element to racing in the mountains.

The course sounds extreme, particularly if the weather turns. Have you researched the course?

Not in depth, but I will. I plan to be as prepared as I possibly can be for this event.

A strong local contingent will be toeing the line… Iain Don Wauchope, AJ Calitz and so on… do you know much about them?

No, but thanks for the heads up. I’ll seek these guys out and assuming I can keep up, probably slot in behind for much of the course. Working together with friends in the mountains is one of the best parts about hitting remote routes.

Michael De Haast has put up a great price purse should somebody post a great time, is that an incentive for you?

Ask me halfway through the route. I have no idea how stout that time really is. If I’m on schedule through halfway and feeling strong, then I’ll definitely be motivated to go after it. If not, then I’ll just continue to enjoy the primary reason for being in South Africa: enjoying a new mountain range and culture.

Have you been to SA before?

First time. I am seriously excited. I’m really looking forward to connecting with the South African running community, eating some local delicacies, and getting stuck into those Witteberg Mountains.

The South Africa Sky Run provides a truly unique opportunity to race in a remote and scenic mountain location. For me the best part about the event is the navigational aspect. Having no markers to follow means that I’ll need to be in tune with the topography and hyper-conscious of my location in relation to that topography. In my experience, the navigational piece really helps to connect with the particular location I am traveling through, which in turn adds a level of appreciation for the terrain that you just don’t get if you’re racing head down through a landscape. I look forward to bringing home a beautiful mental picture of the Witteberg Mountains to share with friends and family.

The Salomon SkyRun takes place on November 22nd and you can view the official website HERE.

The Witteberg is a South African mountain range just off the south-west corner of Lesotho. The range, which rises to 2408 metres, stretches for about 60km from Lundin’s Nek in the east to Lady Grey in the west. The range lends its name to the Witteberg Series, the uppermost fossiliferous sequence of the Cape System of sedimentary rocks in South Africa. The race starts in the town of Lady Grey which is famous for its annual Nativity Play and its quaint houses and incredible scenery. Discover the wonder of Balloch cave along the route with it bushman art and idyllic setting nestled between some of the highest peaks in the Witteberg.

The Witteberg range is one of the most picturesque places in South Africa with some distinctive peaks like Avoca and Halston Peaks dominating the skyline.

The Salomon SkyRun is true mountain running with a variety of terrain from hiking paths that lead you up to the tower, some jeep track is a welcome relief from the majority of the terrain which is on the mountain side as this is a self-supported and self-navigation the route choice is very much in the hands of the individual competitors. Once you have left the town of Lady Grey behind the beauty and remoteness of these mountains soon engulfs you and it is not uncommon to run for the entire race without seeing much civilization around you except those involved in the race.

The fauna and flora is incredible and there are over 650 plant and 80 animal species know to habitat the mountains of the Witteberg.