As runners arrived at 0400 on the morning of Saturday 4th October at the High Terrain Race HQ for the 3×3, Skyrunning UK’s 3rd race in 2014. They may very well have thought the apocalypse had started!

Yes, the rain was that bad!

The race had a capacity field of 300 entrants; expect the normal drop out race of 10% and after pre race registrations on the evening of Friday 3rd October, it was correct to assume that 250+ starters would toe the line. In reality, less than 190 started.

It’s a sign of how bad the conditions were. Ian Mulvey, race director for the 3×3 had consulted with his team and a decision had been made that the first summit at Scafell would be missed with an alternative re route in place. It was a great call… no race wants to make these decisions, however, safety is key and paramount. Remember folks, it’s only running!

Considering everyone taking part was likely to have 9-hours+ on the course, to take runners to such a low point in the first 2-3 hours would have potentially impacted on the race as a whole and may well have not only stretched the runners but logistics.

So bad were the conditions that I personally wasn’t able to make the first ascent due to severe flooding; yes, it was potentially 2009 all over again.

With just under 40km’s covered and on the ascent to Helvellyn, a clear pattern had started to form with Lee Kemp pushing the pace, Donnie Campbell chasing and ever present Skyrunning UK competitor and Peaks Skyrace winner, Jayson Cavill chasing 20-minutes back.

The weather was playing a key factor in the whole day, however, the Biblical conditions of the first couple of hours calmed to leave an ever changing and gusting day. 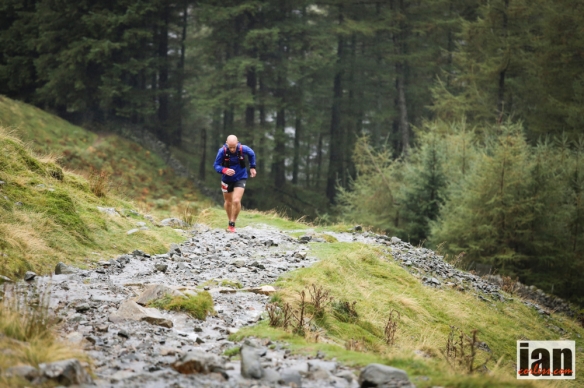 Over Helvellyn and then dropping down to Keswick runners headed up to Latrigg and then took on a tough anti-clockwise loop of Skiddaw. Over the summit the wind was gale force and the wind chill was close if not below zero. Cloud bursts; heavy rain and even a hale storm made the day impressive visually but something to endure from a running perspective.

Lee Kemp somehow lost the race lead over Skiddaw, as he ran past me he shouted that he had taken a wrong turn… I will clarify this later. This mistake by Lee opened the door for Donnie Campbell and looking strong he pushed to the line without actually realising he was the first to cross it! Lee Kemp held on to 2nd and Ed Batty placed 3rd after Jayson Cavill withdrew from the race. Ever present Centurion race winner, Ed Catmur placed 4th and local legend and recent Wainwrights FKT record holder, Steve Birkinshaw placed 5th.

Lizzie Wraith never relinquished the ladies race lead, however, over Skiddaw the gap was reduced considerably. Sally however couldn’t close and the positions remained the same all the way to the line with Kirstin Rosenqvist finishing out the podium.

The 3×3 was a real test. The conditions added to the adventure and from first to last, every single runner should be extremely proud of finishing such a tough race. Ian Mulvey and the High Terrain team did a great job of managing conditions, ensuring everyone’s safety and in the process they have made the 3×3 one of the must do events on the UK calendar.

At the awards ceremony, fell running legend Billy Bland arrived to provide a very natural and humble ending to a great weekend of running.

Attention now turns to the final Skyrunning UK race of 2014, the Mourne Skyline MTR in Ireland.

Race Images will be available HERE after Monday 6th October