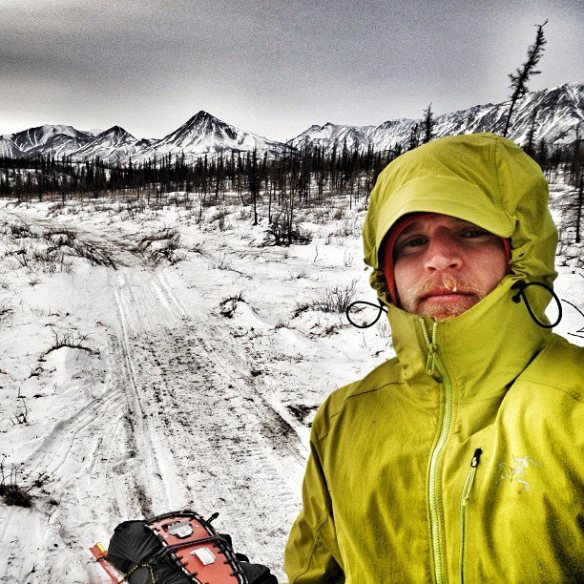 TO tackle an epic 350-mile race across the lonely frozen wilderness of Alaska requires an athlete to be extreme and committed.

Inov-8 / Arc’teryx athlete Joe Grant proved he has both qualities in hardcore measures, overcoming exhaustion and pain to finish the Iditarod Trail Invitational in joint-second place.

Joe has been interviewed twice on Talk Ultra in the build up to the ITI and you can listen to those episodes:

Described by organisers as the world’s longest human powered winter ultra-marathon, Joe raced on foot across frozen rivers and swamplands, through forests and over mountains to complete the course in 6 days, 8 hours and 47 minutes.

He did so pulling a sled weighing 35lb/15kg and taking in just 13 hours of sleep throughout.

The 29-year-old, who is part of a new global inov-8 team of athletes set to push boundaries and stretch limits in 2013, said:

“It was definitely the hardest thing I’ve ever done.

“It was relentless, every day it felt like I’d done 100 miles.

“I slept for just 13 hours in six days and none of that was what you would call really good sleep.”

Born in Oxford in the UK, raised in France and Spain, and now based in Colorado, US. Joe took part in the 2013 Iditarod Trail Invitational (ITI) race that saw 19 competitors on foot and 29 others on bikes complete the 350-mile route between Knik and McGrath.

There were just seven checkpoints on the course where food and lodging was available. Between checkpoints racers had only each other.

“Form the start it was hard.

“We left Knik at 2pm on the opening 57 miles to the first checkpoint at Yentna Station. I hoped to arrive there in the middle of the night at the latest. I eventually got there at 6.35am. I was wrecked, it felt like I’d done double the distance.

“The soft snow had made it tough going, and it was a relief to get inside and eat. I slept for about an hour and a half and left feeling surprisingly great.

“The next 30 miles to Skwenta Roadhouse took another nine hours. I’d planned to sleep for four hours at this point. I ended up sleeping for six hours. It didn’t, however, have the required effect and I left, at midnight, feeling banged up.

“That night on the course was a rough one for me. It was actually quite warm by Alaskan standards, above freezing level, and the snow was like mashed potato.

“Then, between the checkpoints at 130 mile (Winterlake) and 165 miles (Puntilla), and with the surroundings becoming more remote, I hit the wall. I had no choice but to bivvy down in the snow. I couldn’t sleep though, I felt like I was losing my mind. After getting into my bag fully I lay there and shivered for two hours.

“I eventually got into Puntilla at 7.30am. I was so miserable. Then the best thing all race happened – fellow competitor John Logar walked in. We hit the trail again, this time together, and to have that companionship was great.

“We charged up the big climb that followed then dropped down to the next checkpoint at Rohn (at 210 miles).

“Despite having John there with me, I arrived at Rohn destroyed, probably the most destroyed I’ve ever felt. Knowing there was still 140 miles to do to the finish, it seemed impossible. I thought about giving up, but after some soup and rest we set off on the next 90-mile section.

“Arriving at the last checkpoint at Nikolai knowing there was only 50 miles to go, I thought I’d feel improved, but instead my body rebelled in the heat of the hut and I started to feel feverish, so we didn’t stay long.

“Between Nikolai and the finish in McGrath, the temperature fell to -25C. Myself and John crashed and burned several times, lying down on our packs and falling asleep. We’d then get back up and go again.

“With 345 miles done and just five left to go, unbelievably we took a wrong turn that cost us a couple of miles. I think out of sheer frustration more than anything else, we turned around and ran the final seven miles to McGrath!

“With the sweat freezing to our bodies, we rolled across the finish line. I had given every last ounce of anything that was in my body to the race.”

With the 350-mile epic now in his locker, Joe will turn his attention to drier trails and plans to go head-on with the world’s best mountain runners at the opening race in the 2013 Skyrunner ultra series.

May’s 83km Transvulcania La Palma ultra-marathon monster on the island of La Palma in the Atlantic Ocean, which features 4,415m of elevation gain, was last year won by Dakota Jones, with Joe in joint 11th.

Joe went on to record an outstanding second place finish at the 2012 Hardrock 100-mile race in the US – an achievement he wants to better this year.