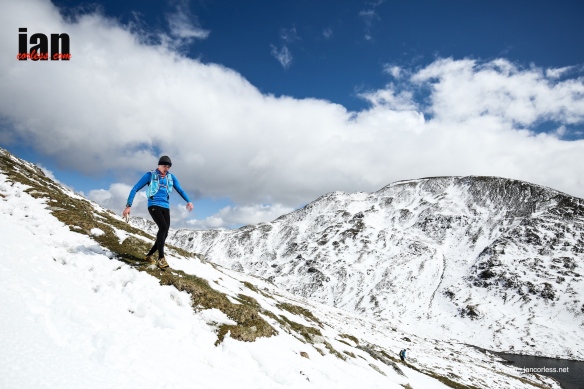 The Lakes really are a special place any day, anytime, in any weather… well, almost? Today though, the 2016 GL3D was treated to ‘one of those days!’

You know what I mean; you can’t plan them, they just come along, surprise you and then make you thankful all day that you decided to run in the Lakes on a bank holiday weekend in the UK.

Snow and plenty of it covered the tops and although a little sleet, hail and snow chased in during the early hours the day, it all cleared leaving blue skies making a winter wonderland paradise in Spring – go figure?

Don’t get me wrong, participants of the GL3D had to survive a sub zero night under canvas to witness God doing his best work in and around Helvellyn. It was worth it though. It was quite a sight in camp as runners slowly peeped out of frozen tents, dusted off the frost and then instead of neatly fold their tents into bags, they had to almost paper fold them – like putting a letter in an envelope.

The GL3D is a very informal mountain marathon; it’s relaxed, casual, offers multiple levels of difficulty (including walking) and is very much geared to a fun weekend and for many, it provides a very gentle introduction to a navigation event. Although an element of self-sufficiency exists – tents, sleeping bags, clothes, food and all other essentials are transported by the race team and this therefore allows the participants to just run (or walk) without clutter.

Multiple distances and multiple controls allow for an easy or hard race. You decide? It’s why the GL3D has become so popular. As race director Shane Ohly explains, “Our courses are described as Elite, A, B and C, as is usual for mountain marathons. However, it is important to note that the distances at the GL3D™ are greater. This is because our routes are more runnable (we stick to footpaths and tracks for much of the time) and the navigation is easier (generally mountain summits) than at the equivalent mountain marathon courses at the LAMM, OMM etc. We would describe our courses as roughly equivalent in terms of ‘difficulty to finish’ as the same standard mountain marathon course at one of these events.”

Day 1 concluded in Grasmere, a bustling hub within the Lakes.

Post race, temperatures in the valley had rose and as the runners put up their tents, cooked food, drank beer and ate free cake, it would have been easy to think from the outside looking in, that you were looking at the fall out from a 3-day rock concert and not a running event.

Beams of light penetrated camp 2 and this was accompanied with a soundtrack of laugher, talk of controls and routes and ultimately how amazing the weather and the scenery had been.

Day 1 of the Great Lakeland 3 Day had been a real success!