“The Canary Islands Federation of Mountaineering and Climbing announces Ryan Sandes as winner of The North Face Transgrancanaria 2014. The arguments explained by the South African runner has been accepted by the arbitral team and the disqualification has been corrected.”

Excitement on the trails almost faded into insignificance on the morning of Sunday Mar 2nd as a press release was released claiming that Julien Chorier would be crowned 2014 Transgrancanaria champion and that Ryan Sandes would be disqualified for a failure to comply with mandatory kit as specified in the race rules.

A couple of hours of frantic activity followed and eventually a resolution found! The incidence arose due to a misunderstanding in regard to a space blanket, which was translated into the word, ‘cover’ by the local race official. Ryan understood cover to mean jacket and produced the item from his pack. The official noted this as a noncompliance of race rules and of course the rest is now history. Discussions will go on in regard to this situation, certainly, errors were made. A simple discussion with Ryan and officials prior to any statement would most certainly have been preferable in contrast to the media frenzy that preceded the awards ceremony. 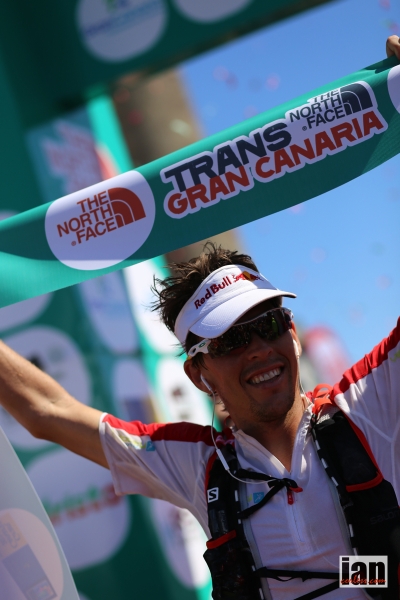 The 2014 Transgrancanaria was always going to be a great race, tough 125km technical course with vertical gain and loss to make the most seasoned trail runner squirm in pain. Add to the course a top-quality men’s and ladies field and we had the makings of a classic.

Pre race we had a couple of notable drops from the line-up, Nathalie Mauclair was expected to be a real presence in the ladies race but she decided her form was not where she needed it to be. Julia Bottger also dropped with a niggling leg injury. In the men’s race, Jez Bragg withdrew before making the journey to Gran Canaria due to a cold, in contrast, Jez’s TNF teammate, Mike Wolfe arrived in Gran Canaria only to come down with flu like symptoms in the days before the race. Miguel Heras’s injury problems continued and he too unfortunately didn’t make the race

Starting at midnight in Agaete, runners would endure tough, technical terrain and relentless climbing before arriving at the finish in Faro de Maspalomas in an expected winning time of 14-hours. At the toll of midnight, runners disappeared into the night. Conditions in comparison to the 2013 edition of the race were good; light rain, some mist and blustery winds caused little problems. Ryan Sandes and Sebastien Chaigneau ran smart races in the early stages allowing time to get in the flow. Ryan in particular showed incredible maturity and patience and gave a master class in how to work your way up through the field and finish in the top slot. For nearly half of the race, Ryan was just on the edges of the top-10, British runner Casey Morgan said post race, ‘He really knew what he was doing and he looked so relaxed and calm. For sure, he was running within himself and I was just waiting for him to take off.’ Take off he did, just after the 70km mark Ryan was lying in 4th-place and in contrast to the 3 –runners in front of him, he looked relaxed and on a mission. Moving up in to 3rd and then 2nd, Ryan finally took the lead with just under 20km to go. Pushing from the front, Ryan couldn’t be complacent… Julien Chorier and Timothy Olson were pursuing. At the line, Ryan had opened up a 9-minute margin confirming that not only is he one of the best ultra distance runners in the world but also that patience is a precious commodity in any race.

Sebastien Chaigneau had looked like a potential winner early in the race. He was the defending champion after all and he knows the trails well. Like Ryan, Seb had paced himself well early in the race and then took over the lead. Running relaxed but with focus, Seb traded blows with Arnaud Julia (Buff) and local runner, Yeray Duran (Yeray placed 5th at CCC in 2013) was arguably a revelation and surprise of the day, despite his 3rd place at the 2013 edition of Transgrancanaria, against such strong competition in 2014, I personally thought he would finish lower down the top-10.

However, Seb dropped with dehydration and Arnaud dropped having run too hard in the early stages of the race. This allowed the two main protagonists and pre race favourites, Julien Chorier and Timothy Olson to take control of the race. 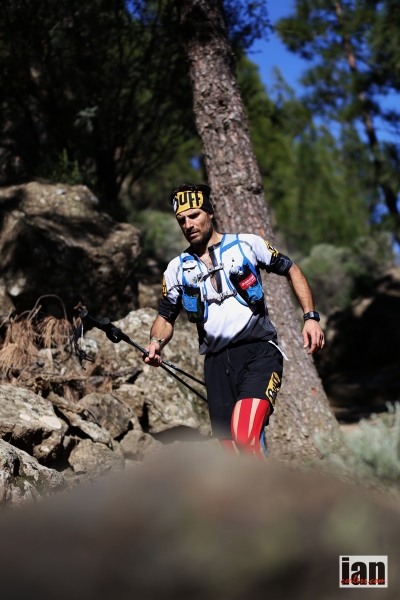 Timothy ran a smart race and respected the terrain and the competition. Taking over the lead at just over halfway, Timothy battled with Julien until Ryan passed them both. Post race, Timothy was very happy with his race, ‘It beat me up; I like that, that’s why I do them. It was a beautiful and technical course. It’s a race I will do it again’.

Julien Chorier impressed me at the 2013 Ronda dels Cims and without doubt was a potential favourite for the top title here on the island of Gran Canaria. Meticulous in preparation, Julien would bring a clever strategy to the race and having run the whole race in or around the top-5, one just wondered ‘when’ he would make his move. With Timothy out in front, the stage had looked set for an American win, however, a charging Ryan Sandes changed that and when Timothy faltered in the latter stage, Julien pounced to take 2nd place just 2.5mins ahead of the American. 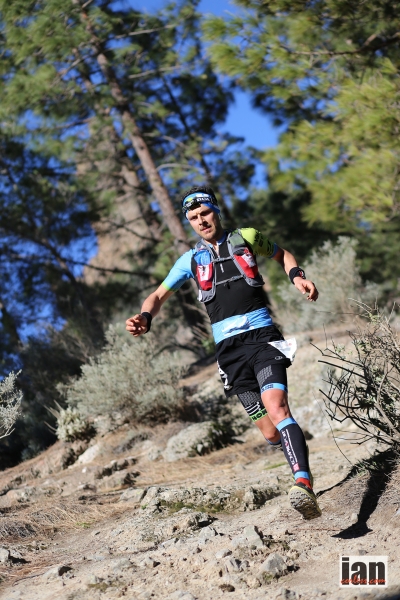 It was Ryan Sandes day. After a troubled 2013, 2014 is certainly looking to be a great year for the South African. In just two weeks he will attempt an FKT in South Africa and then attention will focus on the Holy Grail of ultra; Western States. 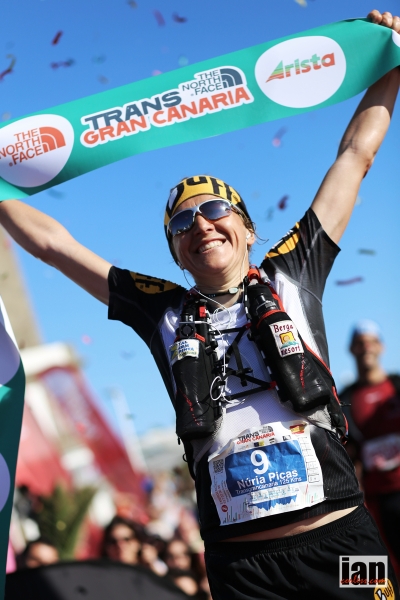 Nuria Picas came into Transgrancanaria as a pre race favourite and the Catalan did not disappoint. Starting slowly over the first 10km she took the lead ahead of Francesca Canepa and then never looked back. Pre race Nuria had said how important it would be to have reserves for the latter stages; however, Nuria didn’t need to worry. Her consistency of effort was superb. Without doubt, Nuria’s 2nd place at the 2013 TNFUTMB has provided incredible confidence in how to run long and technical trail.

With Nathalie Mauclair and Julia Bottger out of the race, in reality, 2nd place and 3rd place was always going to be a battle between Francesca Canepa and Fernanda Maciel. 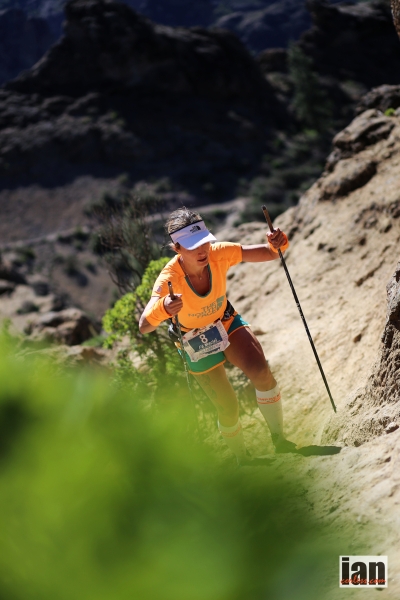 Fernanda looked to have 2nd place sewn up and post race, she told me, ‘I was told I had a 30-45 minute lead over Francesca and I think I became a little complacent. In the latter stages of the race the terrain became easier and more runnable which played into Francesca’s hands. We arrived at the last feed station together and Francesca didn’t stop.’

Needing to eat and hydrate may very well have cost Fernanda 2nd on the podium, we will never know, certainly missing the last feed was not an option!

Francesca had an incredible 2013 dominating long distance racing, however, she found the trail on Gran Canaria a little too technical for her style of running. For much of the day she ran in 3rd place but in the latter stages, Francesca found some extra energy, closed the gap on Fernanda and managed to take 2nd place by just under 3-minutes.

Attention will now turn to UTMF in Japan; many of the runners at Transgrancanaria will be present to do battle once again on very different terrain. I wonder, who will come out on top?