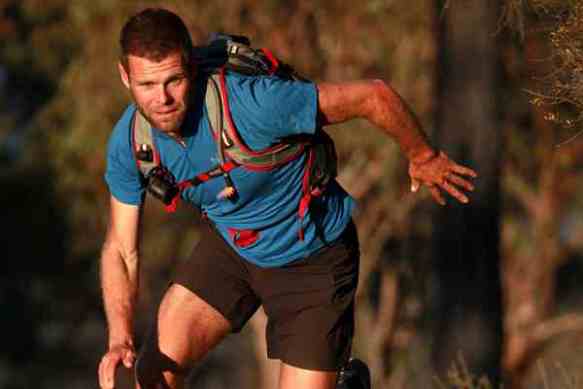 Described as a hybrid of Bear Grylls and Forrest Gump, Melbourne based adventure runner Richard Bowles is set to create another record in the world of ultra-distance trail running, in one of the most fascinating countries on the planet.

Just another long distance runner? Hardly. In 2012 Richard ran over 10,500km of trails, the equivalent distance of 249 marathons, but in much different circumstances. Imagine doing Tough Mudder 10 times a week, add in to the mix some crocodile infested river crossings, an avalanche zone and an active volcano and you’re getting some sense of Richards typical week, every week, for a whole year.

Is he a bit nuts? Maybe, because he’s about embark on yet another wild adventure.

Starting on Sunday 14 April 2013 , Richard will run (and climb) atleast 80km each day along the 1009km INT that winds its way from the Red Sea in Eilat in the southernmost part of Israel to Dan in the North, near the border of Lebanon and Syria, where he plans to arrive 12 days later on April 26….or even sooner if all goes well!

The trail, described by National Geographic as one of the worlds most ‘epic trails’, was the vision of Israeli Ori Dvir, and showcases Israels impressive landscape. Traversing the arid and unforgiving Negev, along ancient Roman roads, climbing up and down craters and canyons, past historically significant sites and over mountain passes, along lush river valleys, and through the heart of the bustling Tel Aviv.

During 2012 Richard became the first person to run the worlds longest marked trail, the rough and remote Bicentennial National Trail of Australia traversing the treacherous and remote dividing range mountains from Melbourne to Cooktown, raising awareness and funds for mental health organisation SANE Australia along the way. Just 3 weeks after completing this incredible feat, Richard flew to New Zealand to tackle their incredibly tough and dangerous 3,054km Te Araroa Trail, and in just 65 days Richard became the first person to run the entire trail.

Combining a passion for adventure, a love for running, and a determination to make a positive contribution to the places through which he runs, Richard and the team will be choosing a worthy charity, one whose work is close to his heart and to which he feels he can offer the most benefit to. The charity partner will be confirmed in the coming weeks. Richard believes in giving back, as these adventures and the people who support him give him so much.

Running 1009km on Israel’s National Trail, over mountains and deserts….and in just 12 days! Or less!!

The Israel National Trail – 1009km winding through this most geographically and historically significant part of the world, from Eilat in the South to Dan in the North.

The question most people ask is why would anyone want to run over 80km each day for 2 weeks? Richard explains, “The trail less travelled offers the best adventures, and I’m all about challenging myself on a daily basis”.

Richard says he is keen to meet with the communities through which the trail passes, and always takes the time to do so…even when running such huge distances each day. “The highlight of the projects in 2012 was meeting people. Being welcomed into their homes, sharing stories over a meal, and enjoying the wonderful adventure that they had now become a part of”.

Richard Bowles has many years experience in the discipline of distance running and regularly runs 200km weekly on trails around Melbourne. He is the first person to ever run the worlds longest marked trail (5,330km Bicentennial National Trail, Australia) , and is the Australian Record holder of the 2010 Tenzing Hillary Mt Everest Marathon; Winner of the 2011 Tasmanian 3 Peaks Challenge (sailing and mountain running event) and Record Holder of the Wilsons Prom Ultra Marathon 2010.
For more info go to http://www.richardbowles.com.au

More about the Israel National Trail

Inspiration for the trail came from Avraham Tamir, a well-known children’s book author who, at the age of 78 hiked the Appalachian Trail. Upon returning to Israel he proposed a hiking trail that wove its way from one end to the other. And so, in 1991, the Israel National Trail (INT) was born. Beginning in the far north of the country hugging the border with Lebanon, the tiny Kibbutz Dan marks the starting point. The finishing line is found some 1009km further south, where Israel’s Red Sea coast stops at the border with Egypt. To undertake the entire trail takes seasoned hikers 30 to 45 days maintaining a pace of about 30 kilometres a day.