Twelve months ago on the island of La Palma, Skyrunning held a conference post Transvulcania La Palma and pre Zegama-Aizkorri. The conference was called, ‘Less Cloud, More Sky’. It assembled some of the best ultra runners from around the world, team managers, ancillary staff and journalists. The purpose was to help forge a direction for the sport. To cut a long story short, what was apparent was the need for technical courses that would attract and test the best runners in the world. Also, the 100-mile distance, for many, was perceived as the one distance that Skyrunning did not cover. Twelve months down the road, or should I say the trail and we have Ronda del Cims, now in its fifth year. Possibly one of the toughest, gnarly 100 mile races on the planet.

With less than a month to the start of one of the most important mountain competitions, the ‘Andorra Ultra Trail Vallnord’, a series of races starting at 10km and culminating in the main event, the 170km Ronda dels Cims.

Over 2,000 athletes will arrive in Ordino, Andorra from June 20th to 23rd to participate in an event that for them will be a tough and life changing personal challenge. In simple terms, the races on offer are hard, technical and pure. They offer a total immersion in nature and as such, must be completely respected.

The 2013 edition of the race will be particularly challenging. Due to a harsh and prolonged winter, several peaks and mountain passes will almost certainly have snow. Believe me, the fifth edition of the Ronda dels Cims has all the makings of a classic. So. Lets look who are the likely contenders in the female and male race over the 170km distance.

The ladies race has all the makings of being a classic. We have some very tough mountain ladies taking part, all in with a chance of winning this race!

UPDATE June 6th, An email from Lizzy “As it turns out I’ve just had an MRI confirming a stress fracture in my foot. So, Hardrock would have been off the cards, and now I also have to pull out of Ronda del Cims.”

Francesca Canepa (Team Vibram) placed 2nd to Lizzy Hawker at the reduced TNFUTMB in 2012 but then just seven days later lined up at the Tor des Geants and won it. An incredible double. Like many other ladies in this race, she loves tough and technical. The distance will not be a problem for her and when in form, she can push Lizzy, Emilie, Nerea and the rest right to the line. A very exciting addition to the race.

Long distance specialist Emilie Lecomte (Quechua) from France comes to Andorra after a very successful 2012. She set a new course record on the GR20 long trail in Corsica and she won the tough and technical, 100m Diagonale des Fous (Raid de la Reunion) on Reunion Island. She recently raced at Transvulcania La Palma and although placed 5th overall she was 2 hours behind race winner, Emelie Forsberg. Without a doubt, Ronda dels Cims is a completely different race to Transvulcania and for sure, Emilie will revel in the tough and technical aspects that this race brings. 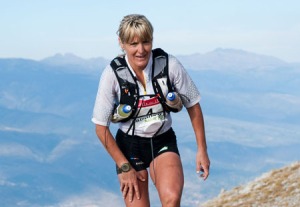 Nerea Martinez (Salomon Santiveri) has already had a successful 2013. She won the 119km Transgrancanaria, won the Apuko 83km, won the Royal Raida 79km and just last month, won the 115km Ultra Trail Madeira. Wow! That is some start to 2013 and looking at her schedule, she has lots more planned! Without doubt she is in form but two of those races in the last two months, Transgrancanaria and Ultra Trail Madeira have been tough and long days out, 17h: 16m and 19h: 15m respectively. One has to question if these will leave Nerea a little jaded for Ronda dels Cims, if not, watch this space.

Update, 18th June. Julia has had to withdraw from the race for personal reasons.

Hiroko Suzuki (Salomon) gets a notable mention as another name to watch.  Hiroko placed 2nd in UTMF in 2012 and was 4th at Tor des Geants. Without doubt she has experience of long tough races and will be one to watch.

Karine Sanson will also perform to the best of her ability and push all the way.

The men’s field on paper has less depth than the ladies field. The out-and-out favorite is Julien Chorier. He excels on tough and technical terrain and as a previous winner of Hardrock 100, he will come to Ronda dels Cims understanding 100% what is required to win the race. In early 2012 he won the 100m UTMF in Japan. When TNFUTMB was shortened he left Chamonix and like Emilie Lecomte he made an attempt on the GR20 in Corsica. His plan was to break Kilian Jornet’s record time. However, the weather was against him. Just a few months ago he returned to Japan and this time he placed 2nd at UTMF. Renowned for meticulous preparation, he will be racing in Andorra with only objective, to win!

*Breaking news… no sooner had I done this preview and I was made aware that Jared Campbell (La Sportiva) would be toeing the line at Ronda dels Cims. Why has this now been confirmed? Well, he ‘tweeted’ this just a few hours ago… “The Andorra course (Ronda dels Cims) looks to be in primo condition! Is it bad that this gets me excited?”

Jared without doubt brings a whole new mix to the men’s race. He is notorious for tough and technical races. Without doubt he will embrace the course in Andorra and embrace the challenge it will bring. One of the very few to finish Barkley, Jared will tough this course out to the bitter end. He recently ran at Pocatello 50 and said he had tired legs but that will have been a training run for the end of June and then Hardrock 100.

Bruno Brunod (Team Forte di Bard) is a legend in Skyrunning. Born in 1962 he has a list of achievements that we can only bow down to and acknowledge:

Matt Cooper (Salomon Australia) is currently training in Chamonix preparation for the race. He was 5th at TNF 100 in 2012 and may add an element of the unknown to the front of the race. He was due to race Bogong to Hotham in January but that race was cancelled. At Cradle Mountain Ultra (82k) he placed 3rd, recently won the 100k Alpine Challenge in 12:31 so he looks to be coming in to form.

Terry Conway (X-Bionic) from the UK is new to Skyrunning. In the UK he has had great success with wins and course records on the Lakeland 100 course but his recent trips to Europe to run at Cavalls del Vent and then La Course des Templiers gave no real indication of his ability to perform against much more competitive fields. In early 2013 he raced at Ultra Trail Barcelona and placed 3rd. He has been out on the Lakeland fells and mountains in recent months gaining time on his legs and accumulating as much vertical as possible. However, the trails in Andorra are a long way removed from those in the UK.

Dave James from the US has been immersing himself in Skyrunning recently. He raced at Transvulcania La Palma, Zegama-Aizkorri and now he will line up at Ronda dels Cims. Dave has a pedigree. He is a 100m US champion and has a fastest 100m time of just over 13 hours. However, he is just not used to the technical terrain that Andorra will throw at him. He is spending time on the course in the coming weeks. It will be a big learning curve buy he is under no illusions of what lies ahead.

Ty Draney (Patagonia Ultra Running Team) from the US is 38 years old and has over a decade of ultra running experience to fall back on. Way back in 2003 he placed 4th at Bear 100, a race that he then went on to win in 2008. He has placed top 20 at Hardrock 100 and most recently won Grand Teton 100m in 2009, placed 3rd at Grindstone 100m in 2010 and was 5th at The Bear in 2012. His recent form is open to question and a 27th placing at Gorge Waterfalls 50k in March leaves us with little indication of he will perform over 100+m tough mountain miles.

18th June, Nico has had to withdraw with an injury

One thing is for sure, Ronda dels Cims will be an incredible few days of ultra mountain trail running. Although I have highlighted the ‘elite’ runners one cannot rule out local talent who will have knowledge and experience of the trails, conditions and mountain. It will be very exciting!