This race is not for everyone. A mistake at the wrong time and place in the Alaskan winter wilderness could cost you fingers and toes or even your life. At times the only possible rescue will be self rescue. For those who do not agree with this philosophy, expect marked trails and more support there are other races out there which will cater to your needs.

Most races try to entice you to enter by telling you what a great experience you will have. How pleasurable it will be. Not the Iditarod Trail Invitational. 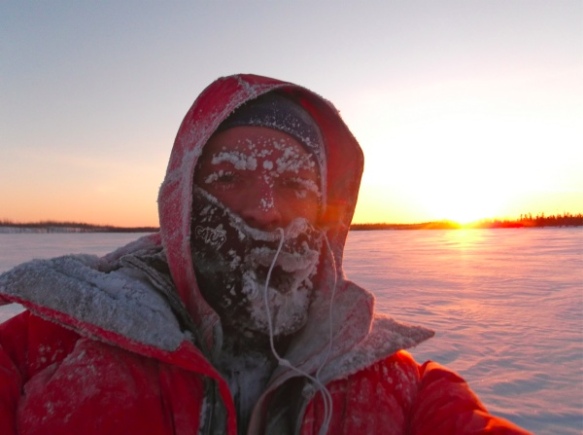 As Geoff Roes proved. This is one seriously tough tough race. In 2012 he was the first man home covering 350 miles in 6 days 23 hours 25 min. Mmmm makes Western States look like a piece of cake eh!

In 2012 only 18 people finished the 350 mile race. The first man home was Peter Basinger in 6 dyas 15 hours BUT that was on a bike! An impressive 6th victory for Peter. Overall 2nd and 3rd was taken by bike riders and then Geoff Roes, 4th overall and 1st runner. Incredible.

In 2013, Arc’teryx athlete Joe Grant will be taking part. I plan to catch up with him before and after this incredibly challenging race and the interviews will be on Talk Ultra.

The Iditarod Trail Invitational is the world’s longest human powered winter ultra. Beginning in Knik, Alaska it follows the Iditarod Trail to McGrath covering 350 miles. Ironically this is called the ‘short race’. They also have a ‘long race’ covering 1100 miles finishing at Nome, Alaska. Support is minimal. Two snow machines ride ahead of the leaders providing a broken trail to McGrath. Food drops are provided at 130 miles, 210 miles and in even numbered years a feed is provided at ‘Cripple‘ and odd numbered years at ‘Iditarod‘.

Between checkpoints, racers are solo or may work with each other. If they continue to ‘Nome’ for the 1100 mile journey once past McGrath it os solo all the way apart from a food drop at ‘Ruby‘. After that they can use village stores, mail packages ahead or possibly use a school for a warm nights rest. Hard core!

“It’s the toughest race in the world.”

The Iditarod Trail Invitational follows the historic Iditarod Trail. The famous sled dog route runs 1000 miles through frozen Alaska every March since 1973 in memory of those brave individuals who brought the important serum to Nome in 1925 during a diphterie outbreak. Using bicycles as a means of transportation on Alaska’s frozen rivers and tundra might seem a little odd and a crazy idea, but men looking for gold around 1900 that couldn’t afford a dog team actually used what they then called a “wheel” and followed the gold rush from Dawson City to Nome on the Yukon River on bicycles.

How do you get in?

This is the most remote and longest winter ultra race in the world.
Competitors in the human powered event go through an interview process with race organizers Bill & Kathi Merchant.

If they have the skills and knowledge to be self sufficient in cold weather, such as high altitude mountaineering experience or previous arctic expeditions they can enter the race.
Prior finishes in races such as the following are qualifying events.

The 2013 race roster is available to view HERE