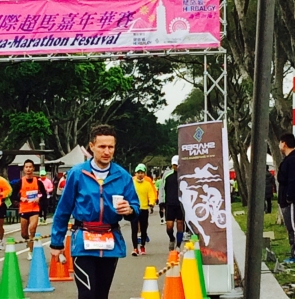 Orkney-based ultra marathon runner, William Sichel had to settle for an age-group win and 14th overall, with his distance of 156.069 miles  in the Taipei 48 Hour Road race which ran from February 14th-16th in the Taiwanese capital.

“I started strongly but after about 4 or 5 hours I could feel that I hadn’t fully recovered from my epic run in Arizona in January.  I just kept going, but had to accept a lesser distance than I would normally achieve in this type of event.”

William has had an incredibly successful, but hectic, last few months of competitive action going back to August when he was runner-up and set a world age-group record at the British UltraFest 6 Day race in Abingdon, England.  Then came runner-up spot again in the Monaco 8 Day race in November followed by  4th overall and 17 records (including another world-age group one) in the Arizona 6 Day over the New Year.

The Taipei event was incredibly popular with over 1700 runners taking part in the 12 hour and 24 hour relay events which took place concurrently with the 48 hour event.  A noisy festival of ultra marathon   competition.

“It’s time now for some rest and recovery and then a few months of hard training before my next competitive outing which will be announced shortly.”

William is working on Project165.com in which he will attempt to have set 165 ultra running records before his 65th birthday on October 1st 2018.  Amongst William’s current 95 records he holds nine world age-group records including the fastest time to run 1000 miles.