The general consensus seemed to be that The Rut offered a 50k course that mixed up the best of American trail running with a combination of pure European style Skyrunning.

‘The Rut is the first Ultra Series final to be held in the USA and was designed and organized by world-class ultra runners Mike Foote and Mike Wolfe specifically to fit Skyrunning parameters. The Rut 50K counts 6,080m vertical meters ascent and descent with the highest point reaching the 3,403m summit of Lone Peak in Montana’s aptly named Big Sky resort.’ Said Lauri van Houten, ISF. The summit was also the destination of Friday’s Lone Peak Vertical Kilometer® – 1,000m vertical climb and at just under 4.6 km long, Mike Foote briefed the runners pre-race, ‘This is a true mountain course so please treat it with the respect it deserves!’

In truth, one could say that the 50K course was a true leveller.

It allowed the fast trail runner’s, Sage Canaday and Ellie Greenwood for example to go head-to-head against the Skyrunners; Kilian Jornet and Emelie Forsberg. Add to the mix runners like Kasie Enman who have delved into both worlds and succeeded and we had a great event to watch and follow. 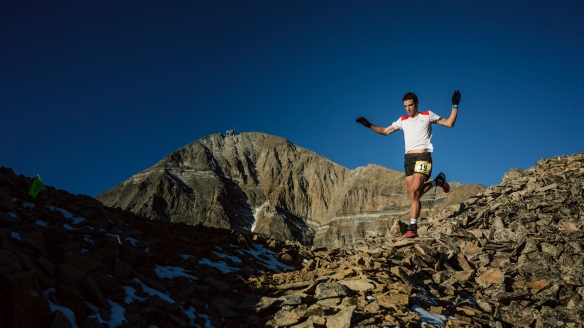 Using the ‘Transvulcania’ approach, Sage pushed hard from the gun, pulling away he opened up a gap of 3-minutes on Kilian Jornet. However, as the terrain kicked up, Mr KJ started to close. It was 90-seconds, then level and then a gradual lead. Slowly but surely, Kilian pulled away showing a consummate display of running ability, not only on easy trails, but also on the tough, steep and technical. At the line, Kilian was victor. Another incredible win to his list of palmares accumulated in 2014. The only blip coming at Transvulcania where he placed 2nd after stepping off ski’s just days earlier. Another Skyrunner® World Series title in the bag and I have to ask the question once again, ‘Is Kilian Jornet THE most rounded athlete in the world?’ His achievements and humility blow my mind.

Emelie Forsberg by comparison ran a race that I could have scripted. Frustrated by the ‘detour’ at Trofeo Kima, Emelie used her emotions to grab the Rut by the horns and push from the off. Pulling away from the rest of the ladies, Emilie’s victory was never really in question. Kasie Enman closed a little in the latter stages but settled for the bridesmaid position, a priority holding off Anna Frost in third. Outright speed didn’t help Ellie Greenwood who ran a great race for 4th. Ultimately, the mountain, the technicality and the altitude became a leveller.

Like Kilian, Emelie rounds out another year with a Skyrunner® World Series victory. They are the King and Queen of the ultra Skyrunning world. Mixing raw athletic ability and gift with the animal instincts of an Ibex. They are not unbeatable, but just now, they are both at the top of their game. 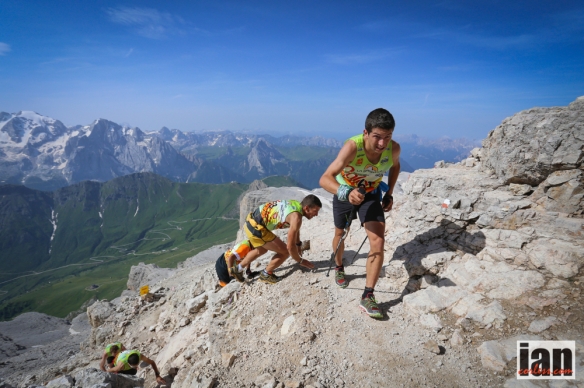 Rising star, Spanish runner Manuel Merillas fulfilled early season potential as displayed at Transvulcania, Ice Trail Tarentaise, Dolomites Skyrace and Kima with 3rd place. I don’t need to tell you, he is one to watch for the future.

Tom Owens once again came away with another top-5 and confirmed himself as the top British mountain runner in the world. Nobody has pitted themselves against such top quality fields and come away with the goods like Tom. It was a hark back to 2012 when Tom pushed Kilian close on several occasions. 2014 is very much the comeback year after a disastrous 2013 with injury, I can’t help but think that Tom will step up another level in 2015.

Kasie Enman has paved the way for running mums! Sounds a touch corny I know but Kasie returned to top flight running in ‘14’ just 10-months after her 2nd child. We all wondered how it would go… Kasie included. In her first race, Zegama-Aizkorri, Kasie was at the front pushing. We all thought, hold on a minute, that wasn’t the plan. She did eventually succumb to the distance and pressure from ladies behind; however, it was an indicator of what was to come. Race after race, Kasie has improved and recently secured a victory at Trofeo Kima. With 2014 in her system, I am excited to see what 2015 will hold.

Anna (Frosty) Frost needs no introduction and to be honest, Frosty shouldn’t really be in my ‘ones to watch’ as we all know her ability. However, pre May 2014, Frosty had a tough time finding form, health and equilibrium. I am pleased to say after a resounding Transvulcania win and CR, a 2nd at the Skyrunning World Champs, a victory at Speedgoat 50k and now 3rd at The Rut that Frosty is back… watch out ladies in 2015! And Frosty, keep the racing as you have in ‘14’. Less is more. 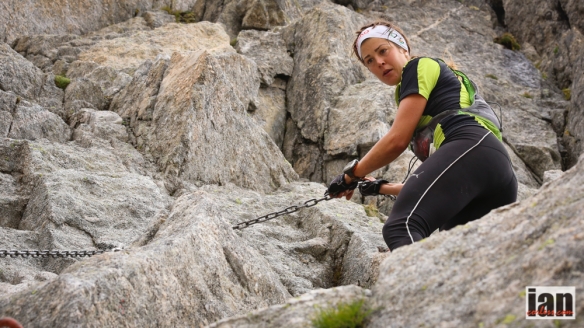 Finally, Alessandra Carlini has worked real hard in 2014 and did top the ranking. Considering this lady lives on the Italian coast with no mountains to train on, her performances have been excellent. If Alessandra can work on some specific training for 2015 she may well be a force to reckon with.

Skyrunning has blossomed and grown. We only need to look at the ‘Likes’ on the Skyrunning FB page to the explosion that his happening before our eyes. The runners want high and technical. The fans want high and technical and the development and spread of the National Series is showing that Skyrunning is here to stay… it may have been around for 20-years, it’s not our fault that everyone is just catching up. Yes, that was the vision of Marino Giacometti back in ‘89’ when he scaled Monte Rosa.

2015 will soon be here and with it new adventures and new experiences for all.