“The purest form of mountain running … getting to the top of a mountain and back down again as quickly as possible. It’s the athlete versus the mountain. It’s not for the faint‐hearted. It’s definitely a significant challenge and the athlete needs to know what they are doing.’’ Marcus Warner

For the very first time, Australia has a new trail running event which is part of the internationally prestigious Skyrunning brand that attracts top athletes to the top of the world, where earth and sky meet.

Officially launched today, the Buffalo Stampede in the Victorian alpine country is expected to attract a bumper field of talented local and overseas runners as it forms the foundation stone of a planned Australia‐New Zealand Skyrunning series.

To be staged on April 5 and 6 next year (2014), it is hoped that ultimately the Buffalo Stampede will join the elite list of Skyrunning World Series events like the Mont Blanc Marathon in France, Speedgoat 50 in the USA and the Mount Elbrus Vertical Kilometre in Russia.

Skyrunning as a recognised discipline traces its roots back to Italian mountaineer Marino Giacometti and fellow enthusiasts who started pioneering races and records on famous European peaks like Mont Blanc in the 1990s.

Today the sport is managed by the International Skyrunning Federation and features superstars like Spanish alpine master Kilian Jornet.

Marcus Warner, the president of Skyrunning Australia and New Zealand, says the Buffalo Stampede embodies what Skyrunning is all about: “The purest form of mountain running … getting to the top of a mountain and back down again as quickly as possible. It’s the athlete versus the mountain. It’s not for the faint‐hearted. It’s definitely a significant challenge and the athlete needs to know what they are doing.’’

The Buffalo Stampede, Warner says, will finally “put Australia on the map’’ of Skyrunning because it will finally convince overseas runners that Australia possesses the terrain to stage a serious mountain running challenge. “Elevation is really what drives the difficulty of it. [The organisers] have really sought out the most extreme mountain in Australia that really embodies Skyrunning because of how steep it is. Nearly 5000m [of elevation gain] over 75km is up there with some of the best races in the world. [Elite overseas runners] are going to go away pretty sore and pretty beat up from this race.’’

Lauri Van Houten, Executive Director of the ISF had this to say, “Of course we’re very excited about the launch of ANZ skyrunning in the capable hands of Marcus Warner and his associates and with the support of an ambassador like Anna Frost.  In global terms Skyrunning has been active in Malaysia and the Philippines for many years and more recently,  South Africa and China. Australia and New Zealand was included as an ISF member at our last General Assembly and, as the home of many great runners, they can’t help but make their mark on the sport!” 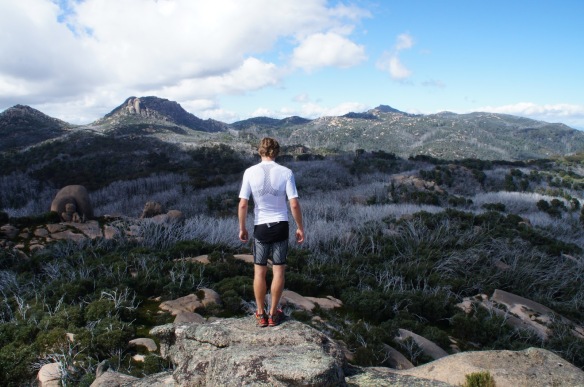 The Buffalo Stampede has been organised by Sean Greenhill from the respected outdoor adventure company Mountain Sports.

“I can’t think of a marathon in Australia that comes within 500m of gain of the Mount Buffalo SkyMarathon,’’ Greenhill says. “They are, in terms of elevation gain over distance, the most difficult events of their kind in Australia.’’

And because it is the eroded magma chamber of an extinct volcano, Mount Buffalo boasts a spectacular granite terrain like no other peak in the Snowy Mountains.

Greenhill also chose Mount Buffalo because it allows him to start the Buffalo Stampede events in the beautiful town of Bright, which he loves for its alpine scenery, fine food, local produce, boutique beer and outdoor sports culture.

Clayton Neil, the manager for economic development with Bright’s Alpine Shire Council, said: “We see the Buffalo Stampede as a really strong addition to our events calendar that really aligns with where we are heading. It embraces being active in nature and living life outside. Bright has always been a popular place for people who love the outdoors and this event takes that to another level.’’

Although the Buffalo Stampede races will be among Australia’s toughest, they are open to entry from anyone, with no qualifying needed.

Up for grabs in the Buffalo Stampede are tickets to the 2014 Skyrunning World Championships to be held next June in the famed French alpine resort of Chamonix, at the foot of Mont Blanc

A three‐day Buffalo Stampede training camp based in Bright will be hosted by top Australian trail runners Brendan Davies and Hanny Allston from January 17 to 19.

Davies raced in the Skyrunning Mont Blanc Marathon this year and will be competing in the Buffalo Stampede Ultra SkyMarathon in April in the hope of winning a ticket back to the slopes of Mont Blanc for the Skyrunning World Championships.

Davies, a Mountain Sports ambassador for the Buffalo Stampede, said: “The Skyrunning label brings with it a lot of credibility. It puts [Australia] on the world map as a destination for the world’s elite trail runners. For Australian runners, it gives us the capacity to dip our feet into the Skyrunning series without having to travel overseas. It’s just a plus for the sport. I see it as a real positive for everyone. I’m going to be going all out for that race.’’

Go to www.buffalostampede.com.au for more details about the Buffalo Stampede.
Sean Greenhill is available for interviews on 0409 047 714 or via sean@mountainsports.com.au