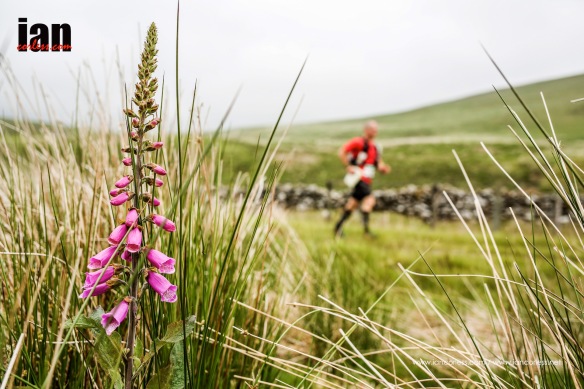 Day 3 took its toll on the runners in the 2015 Berghaus Dragons Back Race and on the morning of day 4; over 50% of the field had withdrawn. It’s fair to say that the Dragons Back Race is one of the toughest multiday races in the world. The relentless terrain, continuous climbing and descending, navigation, sleep deprivation and long days really do make this a toughie!

However, the terrain changed today for day 4. Green fields and rolling hills replaced the dramatic and rugged landscape of the 3 previous days.

Rolling terrain and less vertical ascent does in principal equate to more runnable terrain. However, no matter how runnable the terrain may be, you still need the legs to run! As you can imagine, the runners left in the race do have somewhat sore legs!

After a cloudy start and slight drizzle, the sun slowly broke through the grey but it did take a while; the final hours of the day were baked in glorious sunshine.

Although beautiful, the day 4 course did not have the challenging terrain of the previous days and it was another long day at 64km with 2273m of vertical gain.

Jez Bragg had had a tough day during day 3 with stomach issues and then during the night he had chills, sickness and little or no sleep. He did force some breakfast down and start the day but it soon became clear he was depleted. He reluctantly pulled out of the race.

Jim Mann obviously decided that his 1hour 30min lead over the rest of the field was enough and decided to run day 4 with 2nd overall and 1st lady, Jasmin Paris. Paris was a favourite coming into the Berghaus Dragons Back Race and she has excelled showing everyone a clean pair of heals everyday and in the process she has looked fresh and confident.

Beth Pascall and Lizzie Wraith both looked strong all day, Pascall said post race said, ‘I felt as though I couldn’t go any faster but then I hit the last section. All road! I decided I had to get that over with as soon as possible so I speeded up. Just goes to show, it’s all in the head!’

Wraith came into the race with a bug and had said that she was unsure how her week would go. Obviously it has gone well and just this morning, before the race started she said, ‘If I can finish top 10, I will be over the moon.’

Equally consistent at the front end of the action has been Konrad Rawlik and Damian Hall. Rawlik is 3hour 30min ahead of Hall so we have no fears of a last minute surge on the final day. That would take some serious navigation error!

Tomorrow is the final day! It’s fair to say that anyone who has now finished the first 4 days will finish day 5. Of course, there are no guarantees – a fall, an accident or a serious navigation error could stop all that but lets cross our fingers; believe me, everyone is going to deserve the finish line. 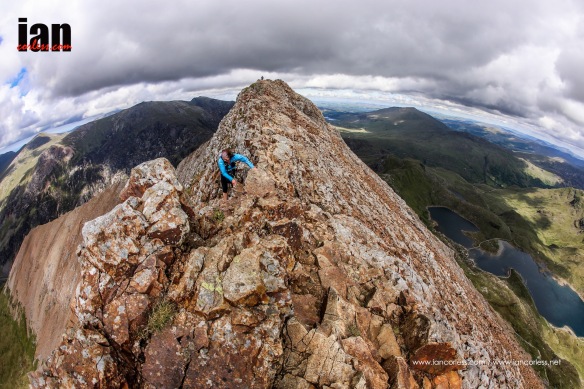 Jim Mann took the fire out of the Dragon and blazed a trail on day 1 of the Berghaus Dragons Back Race. Mann crossed the line to record a time of 7:49 almost 1 hour ahead of predicted time. Post race apparently was heard to say, ‘I was taking it easy today to safe myself!’ That is a worrying sign for the other competitors.

Andre Jonsson finished 2nd 11 minutes behind Mann; a great run! However, it was interesting to hear how Jonsson’s fatigue compared to Mann on the line. He has his work cut out if he hopes to topple Mann.

The weather is always a significant factor in any mountain race and it was an up and down day of rain showers, clag, cloud and sun. When the sun came out it was incredible to see; particularly for those runners who were on Crib Goch.

Jasmine Paris (8:11) placed 1st lady and crossed the line with Konrad Rawlik, Ed Catmur and Damian Hall just behind. Steve Birkinshaw was next to finish running day 1 as a single stage for the Berghaus relay team. The Spine female winner, Beth Pascall (9:07) looked strong all day and finished 2nd. Lizzie Wraith was 3rd lady in 10:06.

Day 1 camp is in Nant-Gwynant and as per all Ourea Events; all runners are looked after with homemade fresh food, constant tea and coffee supplies and an abundance of cake. In contrast to other Ourea Events, participants do not need to provide their own ten, Berghaus as race sponsor have provided large 8 man tents and runners sleep together similar to bivouac at the Marathon des Sables.

As I write this runners are still out on the course and therefore we can only update on retirements when the 2300 cut off has elapsed. However, one of the pre race favourites, Pavel Paloncy (Spine winner) took a fall and has had to retire.

Day 2 will have a staggered start with runners departing between a window of 0600 and 0900. Start times are based on finishing times from day 1.

All times are provisional and will be confirmed in due course.