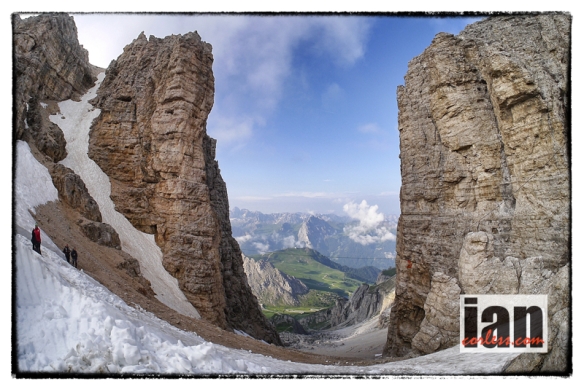 Hot on the heels of the Dolomites VK, just 2-days later, a super stacked field of elite and non-elite runners will tackle the incredible slopes of the Dolomites. Starting in the town of Canazei, the Skyrunner® World Series Dolomites SkyRace® has for many years represented an ideal playground for the world’s top athletes.  The steep technical course and spectacular panoramas it offers has runners coming back for more time and again.  On Sunday, 600+ runners will start the race. Last year, Kilian broke the male ascent record set by Augusti Roc to Piz Boe and Emelie Forsberg broke the female descent record set by Angela Mudge.

The quality of runners, particularly in the men’s field is very deep and therefore a surprise could come from anywhere. 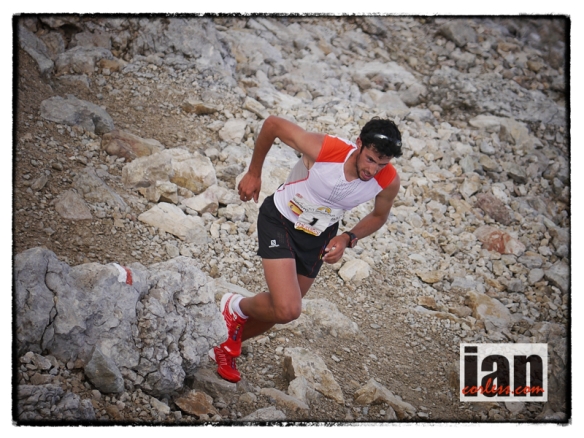 Kilian Jornet has just run 100-miles and as you read this he will be toeing the line in the Vertical Kilometer. Kilian says he feels good but he is absolutely sure that the running and winning of Hardrock 100 will impact on his performances in the Dolomites. I can understand his caution… however; we are talking about Kilian Jornet so topping the podium in Canazei is a distinct possibility. 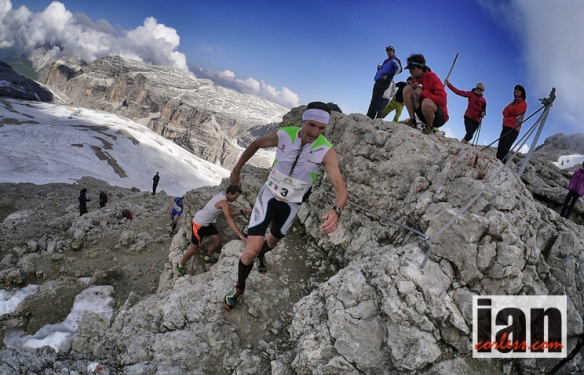 Tadei Pivk had a great race last year taking the 3rd podium place and a repeat performance on a course he knows well is a distinct possibility. Marco De Gasperi will not race this year due to injury so does that open the door for Tadei?

Ionut Zinca and Alexis Sevennec rounded out the top-5 last year over 7-minutes behind a storming Kilian Jornet. Both Ionut and Alexis appear to be in great form at the moment. Ionut in particular is currently lying 4th in the Skyrunner® World Series so he will be looking for more valuable points.

Aritz Egea and Zaid Ait Malek are extremely strong performers over the SKY distance and we have seen them both excel at races such as Zegama-Aizkorri and last years, Limone Extreme. At the Skyrunning World Champions in Chamonix, Aritz ran a great race with a top-10 finish. However, Zaid had a bad day at the office after looking like podium potential in the early stages.

Bernard Dematteis and Martin Dematteis are an exciting addition the SkyRace and they will be looking to bring fast running and vertical climbing ability to contest with the front of the race. They showed everyone a clean pair of heals in Transvulcania running one of the shorter races and it’s fair to say that this duo will potentially cause some fireworks in Canazei.

David Schneider has been quiet this year and may well just sneak under the radar. We saw some excellent performances from David in 2013 and this will be his first Skyrunning race for 2014, I expect he will want to make an impact.

Who else is hot! 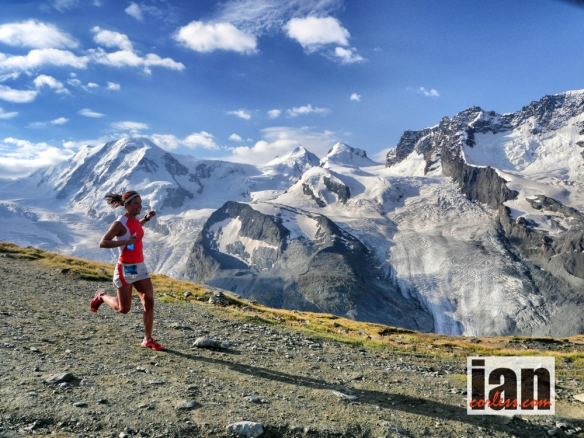 Emelie Forsberg decided not to run the Vertical Kilometer as she felt she needed a little more recovery and easier running after her victory at the tough (and long) Ice Trail Tarentaise just last weekend. This is a wise move and on this pure Skyrunning course, Emelie is hot favourite for the win. 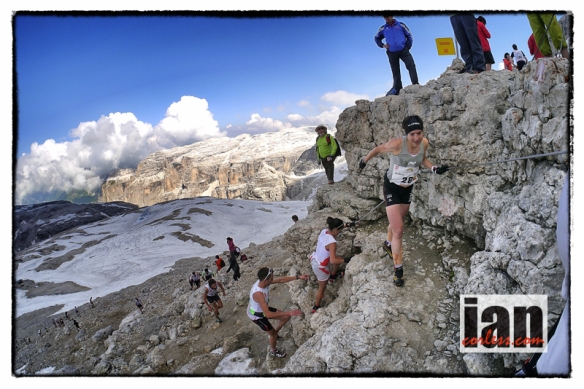 Maite Maiora placed 4th behind Emelie last year almost 11-minutes back, however, Maite is a different runner this year and I personally think we can expect to see her pushing closer to the front.

Antonella Confortola is spreading her works from her favourite VK distance and tackling the slopes of Piz Boe. Antonella will be a contender for the podium as will the other VK specialist, Laura Orgue. Laura doesn’t seem to run many races outside the VK distance, however, when she does she performs at the highest level. These two ladies will bring an interesting dynamic to the race.

Stephanie Jiminez is a pure short distance mountain runner and VK specialist and the Dolomites SkyRace will suit her skill set. Stephanie will be in the mix, pushing all the other ladies to the line.

Victoria Wilkinson from the UK is an exciting prospect. A string of top quality results and performances on home soil bode well for a strong performance here in the Dolomites. The biggest question marks will come in adaptation to altitude and the tough, long, steep and technical terrain that this course offers.

Celine Lafaye has had a quiet 2014 but can’t be ruled out of a top-5 performance. I am just not sure of her current form?

Starting at 1600 in the centre of Chamonix, runners from all over the world started  tackle 3.8km and 1000m’s of vertical gain with one objective; to be the fastest possible!

A route of pure ‘mountain’ spirit, that takes a straight and direct line from the center of Chamonix to the finish at Planpraz. The VK is a pure test of strength. Similar to a prologue in the Tour de France, runner’s start at timed 30-second intervals, the fastest to the summit is the winner!

The opening sections comprise of runnable trail, however, the last section becomes more technical with rocks and this requires more commitment with notably a few aerial passages equipped with cables and ladders.

What a stunning location and what an inspirational day of running. For the first time, La Palma and Transvulcania La Palma held an inaugural Skyrunning Vertical Kilometer® on the zigzag trails leading from the beaches of Tazacorte, onwards and upwards and into the clouds.

Hundreds of spectators turned out and lined the route in a scenario, not dissimilar to a scene in the Tour de France. Late evening heat, blue skies and a plethora of some of the best vertical runners in the world made the inaugural Transvulcania VK® an awe inspiring event.

Departing in 30-second or 1-minute intervals, runners departed the beach with just one objective; who could reach the finish line in the shortest time. 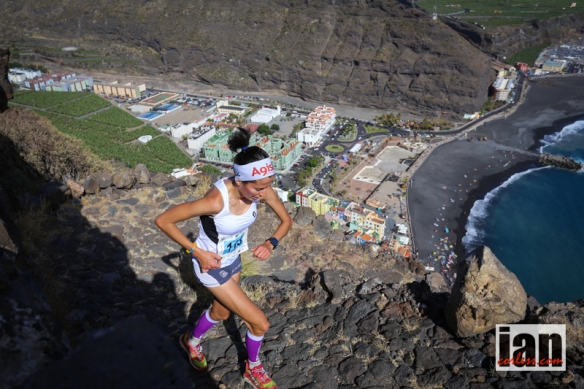 Emelie Forsberg fresh from a very full ski season decided not to complete the whole distance preferring to use the event as a warm up for the ultra on Saturday. 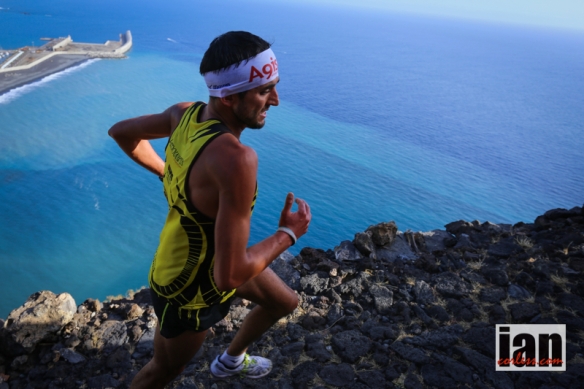 Kilian Jornet running on Spanish soil is treated like a hero, calm and relaxed, Kilian takes the pressure from adoring crowds in his stride and despite little running (Kilian like Emelie has just stepped off skis) placed 3rd. The day however went to the Dematteis brothers, Bernard and Martin who placed 1st and 2nd respectively. They produced to quality runs and reaped the just rewards.

On the podium, to the blasting sounds of AC/DC, the brothers provided us with some quality showboating proving that Skyrunning is without doubt a sport that not only requires grit, fitness and determination but it also requires passion, fun and humor.

Attention turns now to the main event, the Transvulcania La Palma ultra race that will start in the early hours of Saturday morning. Stay tuned for what will be an incredible event.