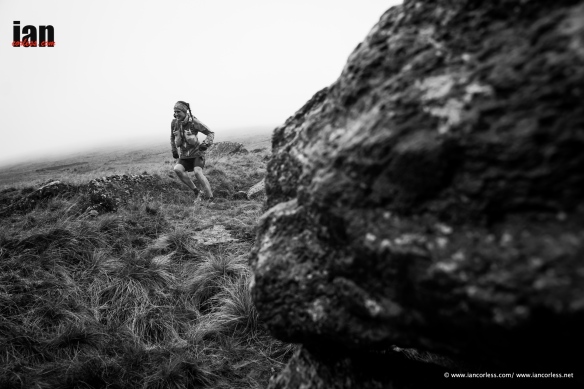 The 2017 Lakes In A Day (LIAD) in contrast to the idyllic 2016 LIAD was a brute! Renowned for beautiful landscape, blue skies and rolling and splendid mountains, the Lakes can also be a grey and brutal place.

As hundreds of runners arrived in Calbeck before the 0800 start, much of the talk was about the day ahead. It wasn’t the 50-miles north to south and the 1000’s of meters of vertical gain, it was, rightly so, what will the weather do?

Initial forecast earlier in the week had looked horrendous, trace morning greeted the runners with a brighter prospect. It was going to rain, that was for sure. The winds come and go and as the day progressed, the grey and wet would gradually clear bringing a drier conclusion.

The dry start gave everyone a false sense of security.

By the time the summit of Blencathra came, what lay ahead was clear for all. The winds were already gusting between 45 and 50mph. At times, it was difficult to remain on the ground as runners angled themselves into the wind fighting the force of nature. Dropping down from the summit, Hall’s Fell provided an intimidating and technical descent all the way to the first control at Threlkeld.

Hall’s Fell for some can be an intimidating section in dry and beautiful conditions, this year, it was intimidating for all – the rock sections ran with water and became like ice. It was four-points of contact for much of the technical sections with steely eye focus (or fear) written across many faces.

From Threlkeld, some easier running precedes the climb to High Fells and Helvellyn. The winds continued to throw the runners around making for a tough section before the drop down to GrisedaleGrisedale Tarn, traverse and then the climb of Fairfield before dropping down to Ambleside via High Pike.

From Ambleside, the course changes completely. The high ground covered, now it’s a journey down the Western side of Windermere though lower-ground, despite prevailing wind and rain, tree cover now offered a blanket of protection all the way to the finish, via Newby Bridge, to Cartmel.

The day was dominated by a strong and consistent performance by Marcis Gubats who crossed the line outside Kim Collison’s course record in 10:18:39. Gubats was an ever-present on the early stages biding his time and by the time he had crossed the Helvellyn summit he had opened a gap which he held all the way to the line.

Much of the talk pre-race had been about Lakeland 50 champ and course record holder, Katie Kaars Sijpesteijn. This lady has been on fire in 2017 with a string of top performances, her most recent coming at Salomon Glen Coe Skyline just 2-weeks previously. The form was there but would she be recovered? On the descent of Hall’s Fell she was 8th and full of smiles. At Grisedale Tarn she was 3rd and still full of smiles. Down the western fells, she moved into 2nd and was in a battle with Jack Casey. By the time the finish line came, Casey had edged away to finish in 10:43:49 and Kaars Sijpesteijn finished 10:46:29 for an overall podium place and an obliteration of the ladies’ record to win the £1000 bonus for a new CR – job done!

It was seriously tough 2017 Lakes In A Day reflected in the battle the runners faced to cross the line, some taking almost 24-hours for the 50-mile journey, darkness bringing a whole new dimension to the journey.