The mood in camp was one of happiness with day-1 completed, however, the thought of day-2 terrified most. For many year’s, Merzouga Dunes (the highest in Morocco) have often been used for the charity stage as a way to finish the race. In 2016, the dunes were used on stage 1, a sandstorm hit and it was carnage. So, the dunes demand respect.

This year, stage 2 would have the runners leave bivouac and have a relatively easy first 13km that would involve rocky plateau, small dunettes and pass through the village of Tisserdimine.

From cp1, the runners would enter the dunes and then stay there for another 13km – that is a long and tough journey, for anyone, even the best. So, it was with some anxiety that runners awoke to day-2.

The plus side coming that after the dunes, it was an easy and flat run in to the finish. 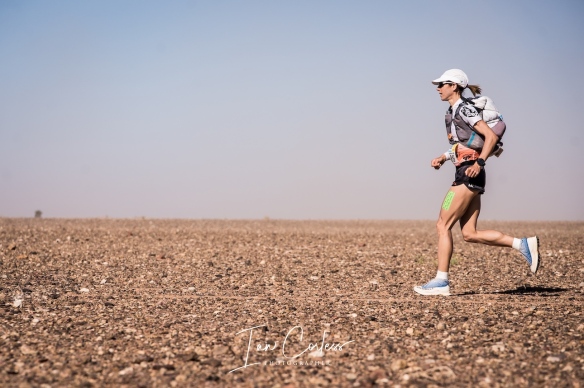 Ragna Debats after winning stage 1 looked happy in bivouac. Using a liquid only strategy for calories had no impact on day-1 and her enthusiasm for day-2 did not waver. ‘I hd a good day-1, rested well and I am now ready for day-2.’

Ragna departed with the leading men and over the early km’s was ahead of the Desert King, Rachid El Morabity. Her stride long, her form perfect and her posture with the pack, excellent. She was flying leaving all the other women in her wake. She once again obliterated the stage crossing the line in 3:14:22 and giving her 10th overall on the stage – wow! 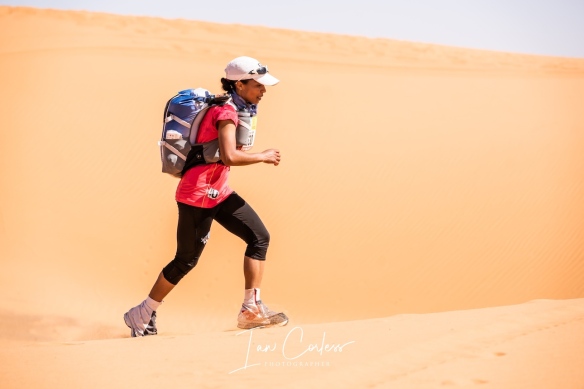 Aziza Raji who placed 2nd on day-1 once again had a good day looking strong on home terrain. She finished 3rd in 4:05:32.

It was past MDS winner, Megan Hicks, who ran better today moving up the field to finish 2nd in 3:59:00 – a remarkable 45-minutes behind Ragna! Notably, Gemma Game who made the podium last-year had a much better day-2 and finished 4th ahead of Lauren Woodwiss. 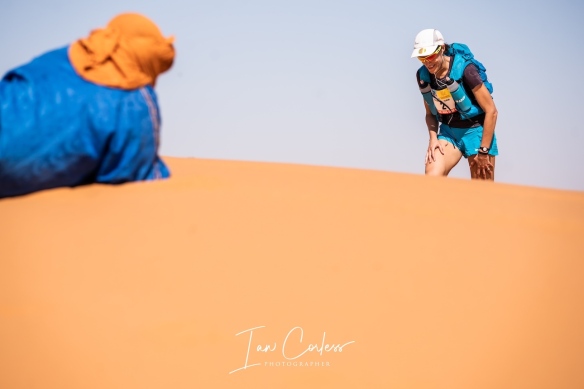 The men’s race had many protagonists taking on the reigns of the race from the front, including Julien Chorier, Robert Merile, Abdelkader El Mouaziz, Robert Pope and so many more… But the experienced, Mohamed and Rachid El Morabity hung back allowing the first 13km to pass without incident. As the dunes arrived, the brothers unleashed ‘dune power’ and the rest of the men just had to suffer and follow in their desert prowess.

Mohamed and Rachid ran together and at the line, today, it was the younger brother Mohamed who crossed first, 6-seconds ahead of the MDS master. Their times, 2:52:30 and 2:52:36. 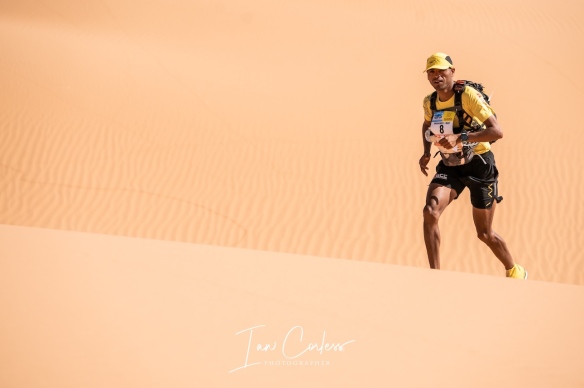 Behind, it was survival, with many of the early protagonists suffering in the terrain and heat.  Abdelkader El Mouaziz finished 3rd ahead of Antonio Alongi and Robert Mrile, their times 2:56:14, 3:01:14 and 3:04:02. 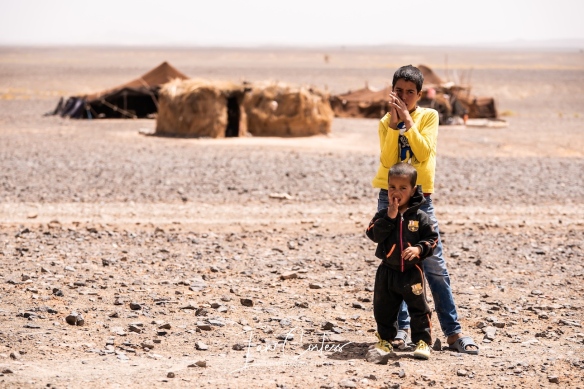 For the other 800 + runners it was a day of survival. But the MDS is all about taking on the challenge and finding the strength to push on. Each and every person out there is an inspiration, but look at Faris from the USA with a prosthetic – he personifies the courage of the MDS. 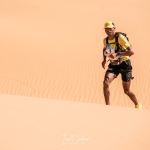 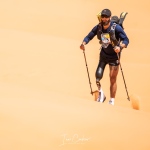 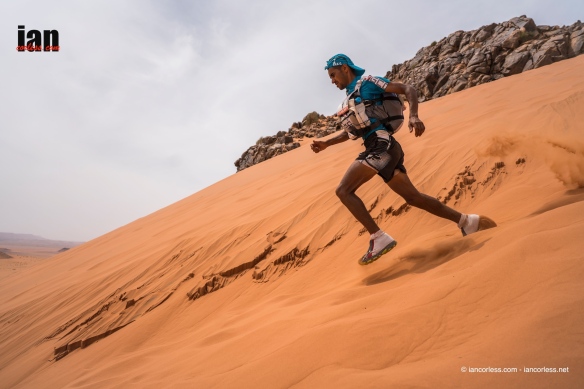 Two start times, 0815 and 1115, the same distance – a gruelling 82.2km of the best of what the Sahara has to offer, incredible views and at times brutal terrain with intense heat.

The route echoed much of the 2016 edition passing early through the oasis of El Maharch, a flat dried up lake before the first couple of climbs of the day starting at 10km. Cp1 offered some refreshment before the climb of Mhadid Al Elahau followed by a high level plateau traverse before a fast and thrilling sandy descent. Heading south a great deal of soft sand took the runners to Cp2 and then climbing a path, the runners came back on themselves through the nest valley. Cp3 to Cp4 was a long sand passage that eventually crossed a Oued. Cp4 to Cp5 and Cp5 to Cp6 were relentless dunes to sap the mind and energy. The push from Cp6 to bivouac via Cp7 was relatively flat but continually sandy – a tough day in Morocco!

The day in many ways unfolded at the front as one may have anticipated with Rachid El Morabity and Nathalie Mauclair taking stage victories. However, the story was not clear cut.

Mauclair took the race to Elisabet Barnes in a last ditch effort for victory. It was expected by everyone, after all, Mauclair is a long distance specialist. Through half the race the gap between the two hovered around 3-4 minutes. From Cp5, Mauclair extended her lead over Barnes but the 2015 Marathon des Sables champion dug in, used her flat running speed and closed on the French lady. Mauclair took victory in 9:39:58 and Barnes crossed the tape in 9:41:16 – job done! With the marathon stage to follow tomorrow, Barnes is in a strong perdition for a 2nd victory at this iconic race. Fernanda Maciel, also a long distance specialist, followed the duo ahead and she finished in 10:00:58. Emilie Lecomte was 4th. 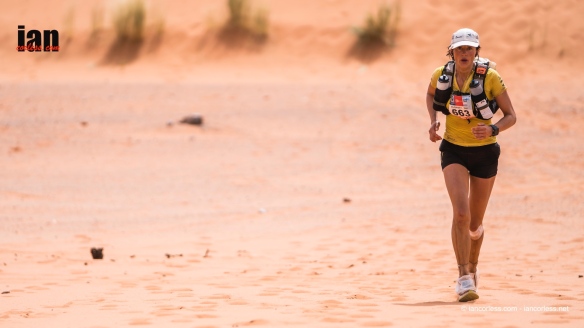 In the men’s race, Rachid ran behind a lead pack that continually changed for much of the day. He never quite looked his fresh self but he pulled it out of the bag as he has done so many times before. He finished in an impressive 8:16:44. 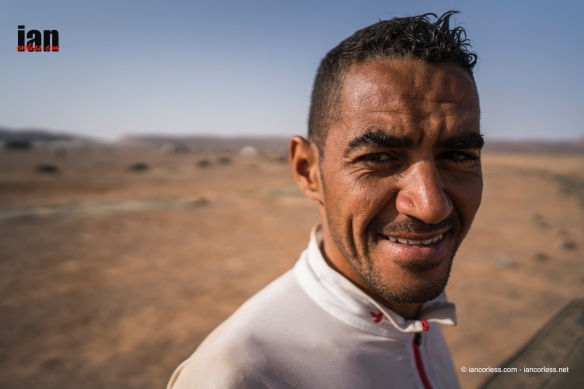 Man of the day was British runner Thomas Evans who set his stall out on day 1 and has played the Moroccans at their own game. He has impressed day-on-day and on the long stage he didn’t sit back and defend, he attacked. At times leading the race. His efforts were rewarded with 2nd in 8:27:46. The margin of time behind him and El Morabity does not reflect a stunning performance! Rachid’s brother Mohamad placed 3rd and then Abdelaziz Baghazza and Remigio Huaman in 8:28:33, 8:41:42 and 8:43:39 respectively.

As I write this, runners are still out on the course enduring another day that will test them to the limit. Don’t listen to anyone who says ‘this’ is an easy race – it is not! So many are fighting demons, some fail, but the grit and determination is inspiring. For example, two people have inspired me – Duncan from the UK who is participating with two prosthetic legs and Louis from Luxembourg who has no arms – inspiring! 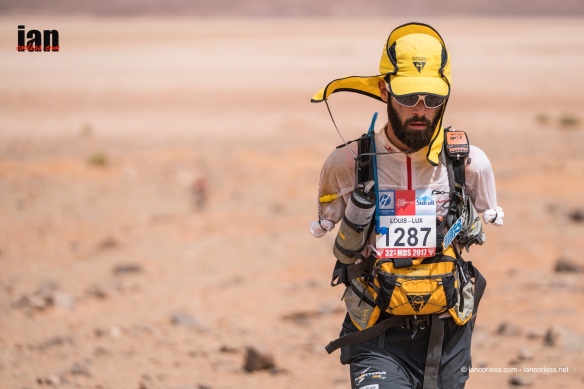 The fifth stage of the 2017 Marathon des Sables if the classic marathon stage of 42.2km and medals will be awarded on the line. The race is Rachid El Morabity and Elisabet Barnes for the taking – four sections of dunes will not make it easy!

Day 2 of the 32nd Marathon des Sables was a tough one. The general mood in bivouac was one of exhaustion, fatigue, tiredness and the question – ‘How will I do it all again tomorrow?’

On the stroke of 0830, the remaining runners were released on a truly spectacular but tough and challenging day 3.

Just 2km out of camp dunes waited and a sandy passage through two mountains, Running through a Oued, the first challenge of the day came at 7.4km with a sandy passage and steep climb to the summit of Joua Baba Ali jebel and then a technical path lead to Cp1 at 10km. From here a small section of flat running preceded arguably one of the highlights of the 32nd Marathon des Sables – the second section of Joua Baba Ali jebel. This section is ‘skyrunning’ in nature – technical, exposed and a real challenge. A sandy descent lead to the flat valley and a long flat run to Cp2 before the tough and challenging climb to the summit of El Oftal jebel. Descending down a stony gulley, dunes followed and then a flat and expansive run to the bivouac concluded the 31.6km day.

The day started with Rachid El Morabity bidding his time and running a little behind his Moroccan friends. However, the early stages saw a charge from Remigio Human, Andy Symonds and Thomas Evans. Was he El Morabity struggling? The simple answer is no! After Cp2 he regained the front of the race and although he didn’t pull away and gain a huge margin, win the day he did! El Morabity crossed the day 3 finish in a ridiculous 2:33:14, his brother Mohamad was 2nd in 2:34:25 and then Abdelaziz Baghazza, Abdelkader El Mouaziz and Thomas Evans took the remaining top-5 placings in 2:34:26, 2:35:59 and 2:38:53 respectively. I think they were all thinking of the ‘long-day’ of 80km tomorrow! 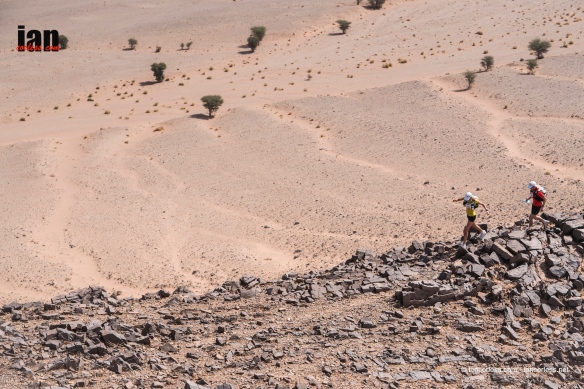 Elisabet Barnes lead from the front once again and it remained that way all the way to the end. However, the technical terrain allowed Nathalie Mauclair to keep her much closer in sight and at times they were just seconds apart. It was in the flatter final stages that Barnes opened a little time crossing in 3:13:07 to Mauclair’s 3:15:14. Fernanda Maciel one again returned to form finishing 3rd in 3:27:11. However, Barnes took a fall today after being distracted on the course. At the finish she has received an injection and stitches… I have no other information at the moment and will report back after chatting in bivouac. Melanie Rousset, Emilie Lecomte and Aziza Raji took the other top-6 places in 3:28:02, 3:33:44, and 3:47:23.

Attention now turns to the much feared ‘long-day!’ At 86.2km and a 35h cut-off, this day will be a challenge for all. There are two starts with the majority of the race leaving at 08:15 and the top-runners departing at 11:15.