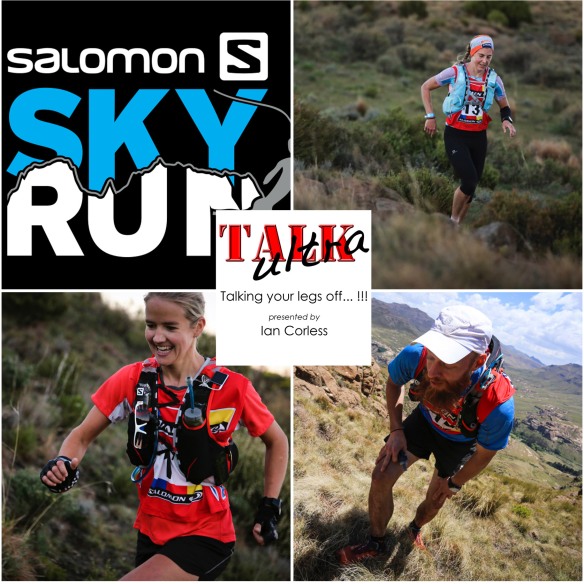 Episode 75 of Talk Ultra is all about the Salomon Skyrun and South Africa. We bring an interview with the ladies winner Landie Greyling. We also talk with the ladies 2nd place, Julia Boettger. Gary Robbins placed 2nd overall and discusses in-depth his race and co hosts the show. We bring sounds from Moketsi Game Ranch, experiences from Cape Town and talk Skyrun with Adrian Saffy and Michael de Haast.
This weeks show is a little different to our usual episodes.
Gary Robbins placed 2nd overall in the race and he co-hosts providing an in-depth insight into the race, his experiences of South Africa and he even set an FKT on Table Mountain.
We bring you sounds and interviews from Moketsi Game Reserve and race directors, Michael de Haast and Adrian Saffy talk Skyrun and South Africa.
Listen to Hyenas, growl with lions and dance to some quality ‘SA’ tunes.
Experience South Africa….
Images from SA and the Skyrun are available on this website HERE and you can view images from the whole trip HERE
Links:
http://traffic.libsyn.com/talkultra/Episode_75_-_Salomon_Skyrun.mp3
ITunes http://itunes.apple.com/gb/podcast/talk-ultra/id497318073
Libsyn – feed://talkultra.libsyn.com/rss
Website – talkultra.com

Philipp Reiter ©iancorless.comHow have the last couple of months been from a racing perspective?

Philipp Retier has had a quite 2014 due to a problematic foot injury. The season started well with a multi day adventure at The Coastal Challenge in Costa Rica and the iconic, Transvulcania. In June, running ground to a halt after running 100-miles in the charity D-Day celebrations in Normandy. Philipp is back on track now and I caught up with him as he prepares for the Salomon SkyRun in South Africa.

How have the last couple of months been from a racing perspective?

Unfortunately I have been injured for the whole summer from a community running event on the flat asphalt road and was not really able to run. I could not think about racing. To stay fit I was cycling quite a lot around my home town – MTB, road bike and cross-bike.
As you can imagine, it was very disappointing for me, but it is great to have a big (running) perspective now at the end of November with the Salomon SkyRun.

Do you have any targets between now and your trip to SA?

My studies at the university started in the beginning of October, so I have enough work trying to fit everything in my day; so no races are planned in preparation. I still feel more familiar to cycling than to running at the moment which I have to change in the next weeks.

How’s training going – have you done anything specific for SA?

I have already asked a few participants about the terrain and climate at the SkyRun and figured out that the weather is changing pretty fast – hot and very dry in the valleys, freezing cold and stormy on the ridges. For the cold I can prepare at home and for the hot maybe a few sauna-sessions should be good! As the terrain is very rocky and rough I will run more off-trail at home. 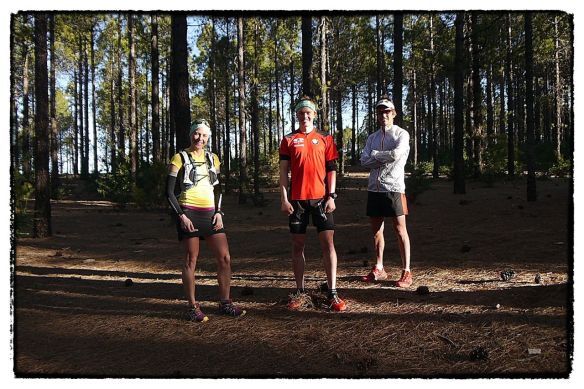 Maybe you have been brushing up on your navigation and looking at some maps?

Yes, indeed! I was asked to scout routes for a trailrunning stage race here in Germany, so I have done quite a lot of map work trying to find the best, fastest and most beautiful spots. I mainly run around with a map in my hands which could be similar in South Africa…

Are you intimidated by the navigation element of the SkyRun?

Should I? It is totally new for me not to “just” follow the marks in a race but that makes it more interesting. Then it’s not only fast legs and stong lungs to be in a good position but also your brain has to work much more! I am only a bit worried as I have no experience using the compass for navigation or a mobile GPS-device apart from my watch.

The course sounds extreme, particularly if the weather turns. Have you researched the course?

No, not really. I have only watched some videos from the last editions and they made the course and the race look quite tough. It’s not the heat or the cold alone that make me worried but the extreme fast changes of both. So the backpack will be more heavy than in a “normal” race as it’s quite a lot of stuff to carry…

A strong local contingent will be toeing the line… Iain Don Wauchope, AJ Calitz and so on… do you know much about them?

Yes, I have heared that they are really strong and apart form their fitness they are very familiar to the race route, the climate and the terrain. They know exactly where to find water, how to climb the barbed wired fences,… So, I will just thry to follow them.

Michael De Haast has put up a great price purse should somebody post a great time, is that an incentive for you?

Aaagh, that is a good question. I have read that it’s $10.000 for the first runner who goes under 12 hours! But I guess that is almost impossible and I know that my teammate Ryan Sandes, who is an excellent runner especially in that type of terrain, needed about 12:30h last year. So I am not sure if someone can beat that. It would be a great boost for my student wallet though.

Have you been to SA before?

No, unfortunately not. But one of my climbing friends was there last year for bouldering and he was so excited that he will come back next year. He showed me some pictures – just stunning!

What are you most looking forward to?

The huge untouched landscape, some wild animals you can only see in the zoo at home (giraffes, lions, elephants,…), get to know the SA culture and how it’s connected to the European colony many years ago. Eat the famous steaks. Go running on the table mountain and explore Cape Town – quite a few things to do… maybe I will need to stay?

“The Salomon SkyRun is something completely new. I have been running in the jungle of Costa Rica, the Rocky Mountains in the USA, scrambled in the French Alps and raced on dry Spain islands but it’s was all marked. I never had to care about choosing the best and fastest way, run with a map in my hands and think about not missing the next well to fill up my water bottles. To perform good in this SA adventure I will not only need power in my legs, strong lungs and mental force but also navigation skills and the ability to read the terrain to choose the best way. It’s much more about tactics and planning! – I can’t wait!” Philipp Reiter 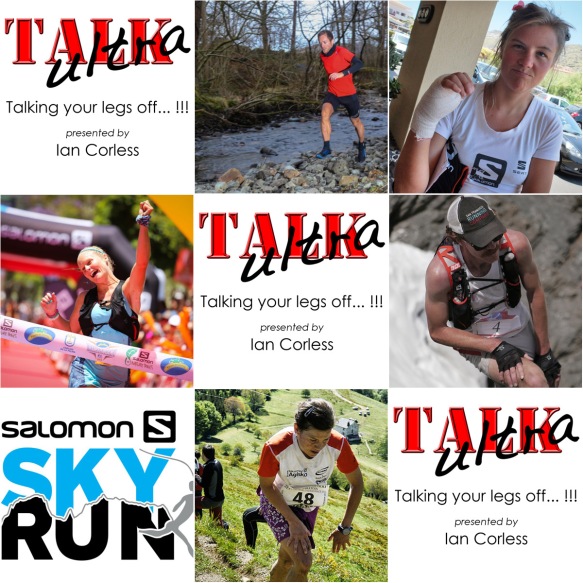 Episode 61 of Talk Ultra – Anna Frost tells us all about the incredible comeback at Transvulcania, isla de La Palma. Rickey Gates talks running in the UK with Scott Jurek and the Bob Graham Round. Eirik D Haugsnes discusses his 2014 season and Emelie Forsberg is back in smilesandmiles with a sore hand. Michael de Haast, race director for the Salomon Skyrun in South Africa talks us through the course and tells us about a great opportunity. The News, a Blog, Up and Coming Races and our favourite, Pocket Rocket, Stevie Kremer co-hosts the show.

Zegama is just a week away and I caught with Eirik Haugsnes at a recent inov-8 athlete retreat to get his thoughts on the up and coming season
AUDIO with Eirik
BLOG – Dakota Jones on Transvulcania – http://www.irunfar.com/2014/05/dakota-joness-2014-transvulcania-report.html
INTERVIEW
Anna Frost is back… after a troubled 18-months, Frosty is back were it all started, Transvulcania. Listen to the story
MELTZER MOMENT with Speedgoat
INTERVIEW
Rickey Gates recently came to the UK with Scott Jurek and tacked our trails, fells and mountains. They even had a go at the Bob Graham Round… listen to Rickey’s insight.
SMILES and MILES with EMELIE FORSBERG
INTERVIEW
Michael de Haast race director for the Salomon Skyrun tells us all about his incredibly tough and challenging race in South Africa which will take place in November. Listeners to Talk Ultra are able to take part in this event with a very special package that has been put together. – https://iancorless.org/salomon-sky-run-south-africa/
UP & COMING RACES