High mountains, arduous climbs, thin air, incredible vistas and the adrenalin rush of running on technical trail – the Lesotho Ultra Trail (LUT) promised everything a skyrunning experience should offer, and it delivered even more.

As Africa’s first Ultra Skymarathon®, the announcement of the LUT drew much attention in the world’s skyrunning arena, and the event did not disappoint. The race, which was staged in the Maluti Mountains of northern Lesotho, just 50km of the border of South Africa, attracted athletes from around the world, including South Africa, Austria, Belgium, Spain, Australia, Canada, UK and USA.

Affectionately known as the Mountain Kingdom, Lesotho boasts some of southern Africa’s most beautiful skyrunning terrain with its vast wilderness of unspoilt mountain vistas, and is regarded by many as a paradise for skyrunners. The LUT was hosted by the Maliba Mountain Lodge, providing a superb hub for the efficient organisation of the event.

Both the men’s and women’s field provided a tightly competitive edge, with many of South Africa’s top trail runners vying for top honours. The day brought its share of surprises and made the race even more exciting than predicted.

For the first third of the 50km race, the trio of Lucky Mia and race favourites Iain don Wauchope and AJ Calitz led the field, with several fast runners forming the chase group as they climbed the 1 150m of vertical gain over 15km to reach 3 145m, the highest point of the route at 23km. 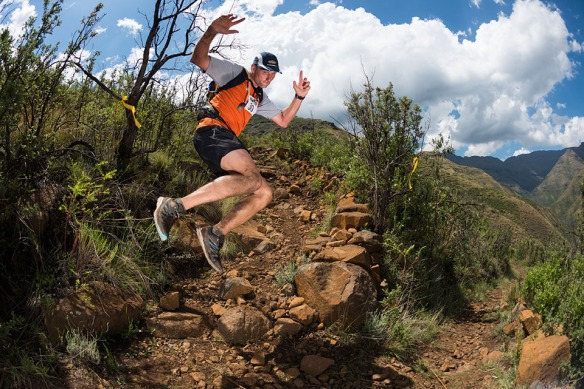 Thick mist on the 10km stretch of ridgeline above 3 000m reduced visibility and made the sighting of the bright yellow route markers difficult for the runners. With the front three runners Mia, Don Wauchope and Calitz temporarily losing their way, the chase group of Andrew Hagan, Quinton Honey and Spain’s Manual Diez Raobago took the lead, and the race was on.

Hagan, well known for his high-speed downhill running capability, took full advantage of the 8km technical descent, earning him enough of a lead on Raobago and Honey to maintain the gap over the next nasty climb, which called for a 720m vertical gain over 6km. The final 700m technical descent further clinched Hagan’s lead, and he took line honours in an impressive 6:07:22.

The ladies race was just as hotly contested, with Robyn Kime and Tracy Zunckel leading the fray together until the 37km mark, when Zunckel took command over the final 13km, achieving an 11 min gap on Kime to win the race in a convincing 6:56:17. Kime finished in 2nd place in 7:07:28, followed by Canadian Stacie Carrigan in a very solid 7:23:36.

Speaking about her experience at Africa’s first Ultra Skymarathon®, Carrigan was ecstatic. “When I arrived at Maliba Lodge, I was blown away by the scenery – it was incredible. The race course too did not disappoint, and my hopes for a challenge were met. During the low points when I started to feel beat up and broken, I would look up and catch a glimpse of a waterfall, river, the mountains and valleys and all the beauty of my surroundings was enough to make me smile and keep pushing to the finish line,” said Carrigan.

LUT race organiser Andrew Booth sees skyrunning in southern Africa as the exciting future of trail running. “For years South African trail runners have watched with envy as the sport of skyrunning grew in Europe. Now, with the formation of the South African Skyrunning Association (SASA), the discipline has officially arrived in southern Africa. That means we can have a national skyrunning series in our own ‘backyard’, accessible to all,” said Booth.

The LUT was SASA’s second sanctioned skyrunning event – the first being 36km Matroosberg Skymarathon®, which was staged in the Western Cape in October.

“The success of the Matroosberg Skymarathon® and the Lesotho Ultra Trail has seen much excitement, and the imminent announcement of the launch of a national skyrunning series in 2014 has got the trail  community in South Africa quite abuzz,” said SASA chairman James Hallett. 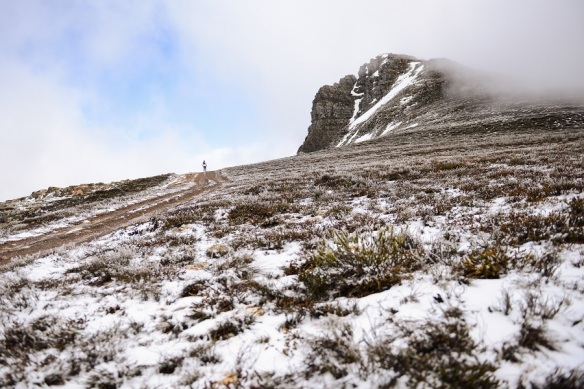 Staged in the Matroosberg Nature Reserve near Ceres in the Western Cape, the 36km race classifies as a SkyMarathon®, in which runners will exceed an altitude of 2 000m, enduring inclines exceeding 30%, with climbing difficulties of less than 11 degrees.

Runners from across the country will be on the start line on Saturday 26 October, with big trail names like AJ Calitz, Nic de Beer, Ake Fagereng and Charl Soumer contending for the top positions, with the likes of Derrick Baard, Noel Ernstzen, Luke Powers, Michael Owen and Leo Rust in the chase group.

The women’s line up will be equally competitive, with Robin Kime, Linda Doke, Annemien Ganzevoort and Chantel Nienaber predicted to give each other a good run for their money.

SASA is an associate member of the International Skyrunning Federation (ISF), whose founder Marino Giacometti saw the birth of the sports discipline of skyrunning some 22 years ago. He believed the name spoke for itself – it was about running where earth and sky meet.

The MTC is the first of two SASA-sanctioned events in 2013. The much-awaited Lesotho Ultra Trail, southern Africa’s first Ultra SkyMarathon®, will cover 55km in the Maluti Mountains in the Kingdom of Lesotho on 30 November. The starting line-up will boast one of the best ever fields in trail running in southern Africa, including Canadian ultra-distance trail runner of the year 2012 Adam Campbell.

Both races will form part of a national skyrunning circuit from 2014 – the details of which will be announced soon.

MTC race organiser Ghaleed Nortje is excited to have his race as the one that introduces local trail runners to skyrunning in South Africa.

“I’m really excited about the MTC being sanctioned by SASA, and by the prospect of it forming part of a national skyrunning circuit from 2014. Gone are the days when we trail runners had to drool over skyrunning events in Europe and the USA – our South African athletes can now be a part of the rich experience too, by participating in local skyrunning events,” says Nortje.

With just a few days to go before the race, all eyes are on the weather – just a fortnight ago the Matroosberg was still covered in snow. As with all mountain trail races, runners will be required to carry specific mandatory kit with them during the race to prepare for all weather eventualities.